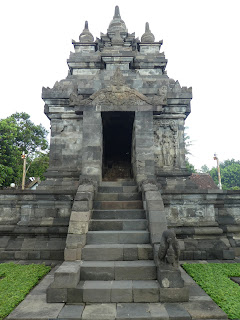 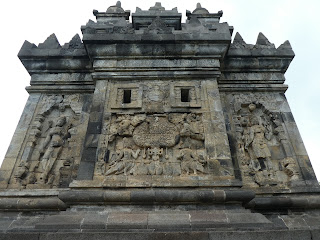 To this day, elaborate carved reliefs can be seen
on this Buddhist structure's outer walls
On the second day of our first ever visit to Indonesia, my German friend and I took some time out to visit a small Buddhist temple that's part of the UNESCO World Heritage-listed Borobudur temple compounds and, in fact, lines up in a straight line with the main temple complex and another temple further away from that massively impressive monument.
In retrospect, my impression of Candi Pawon couldn't help but be impacted by my having already caught sight of the awe-inspiring Borobudur Temple located approximately 1.5-1.75 kilometers (~ 1 mile) to its west.  At the same time though, I fully realize that if I were to come across something like this example of ancient Javanese temple architecture anywhere in historical monument-poor Malaysia (or, for that matter, Hong Kong), I'd be super impressed by how it looks as well as the fact of its very existence some 1,200 years after coming into being!
Thought by some to pre-date Borobudur (whose construction is postulated to have taken place in the 8th and/or 9th century AD), Candi Pawon is a rather mysterious temple thanks in no part to there being no traces left of what had been housed in it.  Upon entering its inner space, pretty much all one can see are bare walls, though certain alcove areas and such exist to indicate that there must have been figurines or some such objects placed there at some point.
If truth be told, the most interesting parts of this small temple -- which, nonetheless, is tall enough to tower over its far less old but also shabbier neighboring buildings (that house modest souvenir stores on one side of Candi Pawon and private homes on its other sides) -- are those sections of its external walls on which elaborate carved reliefs visually similar to those found at Borobudur remain visible.  Consequently, the greater part of the short time my German friend and I spent at the site -- which was quite a bit less than the amount of time it took for us to walk from our hotel (located within the main Borobudur temple grounds) to it, never mind back!
Still, while it admittedly disappointed visually (in comparison to Borobudur -- but heck, pretty much everything does!), the completist in me was glad to have visited this temple which some have conjectured housed Buddhist relics and/or remains; with the latter idea being related to the name it has given (since pawon means "hearth" and such spaces usually contain ashes).  And even though my German friend and I didn't follow the pilgrimage route that connected it to Candi Mendut -- which we had passed by on the way to Borobudur on day one and checked out on the way out the next day -- as well as the main Borobudur temple itself, at least we did end up spending time in each of the three of its main stops.
At the same time, I doubt that many other visitors to the area have this completist tendency; this not least since a good bulk of the Indonesians I met at the main Borobudur temple were only in the area for a few hours and my sense too is that the vast majority of foreign tourists take day trips from Yogyakarta (some 40 kilometers away) to Borobudur.  Consequently, I would not have be surprised at all to learn that my German friend and I had been the Candi Pawon's first visitors that day, and maybe even that week or for the entire month! ;b
Posted by YTSL at 6:43 PM