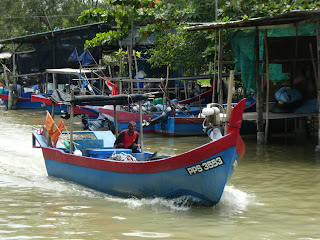 A fisherman bringing home his catch 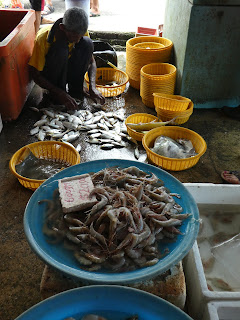 Sorted catch for sale and catch being sorted 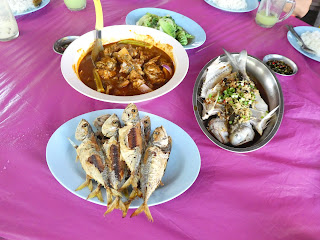 From boat to stall to table in a matter of minutes!


A couple of weeks ago, I returned to Penang to meet up with my German friend -- with whom I was going to head over to Indonesia as well as spend some time in home state.  On her first full day in Penang, we joined my mother and a group of friends in heading over to Kampung Pulau Betong for a seafood lunch at an eating spot which I had expected to be Malay -- because the friend of my mother who had proposed going there is of that ethnicity -- but turned out to be operated by ethnic Chinese.

In addition to the Jin Siang Cafe's ownership's ethnicity being a surprise, I must admit to being unprepared for the food turning out to be so tasty; with the fish curry being my favorite of the many dishes we ordered along with that of a large (unpictured) plate of flower crab.  It's not that the decor of the eatery is on the "no frills" side.  Rather, it's also that I've seen noticeably better -- and fresher -- looking fish and other sea creatures on sale at Hong Kong wet markets such as those over in Shau Kei Wan and Causeway Bay's Bowrington Road.

In addition, it's true enough that both my German friend and I were somewhat put off by how muddy brown the water of the river by Jin Siang Cafe was.  Indeed, it was only after my mother hastened to assure us that the catch we'd be consuming had been caught in fishing grounds out in the Malacca Straits rather than the river flowing through Kampung Pulau Betong that we consented to join her and her friends in what proved to be quite the culinary feast!


Over lunch, I got to reflecting how it was that those of our party who've spent the bulk -- if not all -- of their lives in Penang were perfectly comfortable dining at the Jin Siang Cafe whereas those of us used to less basic and, well, more hygienic conditions might have opted against doing so if we hadn't been with the company that we were.  Still, the fact of the matter is that none of us had upset stomachs post-lunch as well as did find what was served up (including fish cooked a number of ways along with dishes of prawns, crabs and the kind of shellfish I know only by the Malaysian name of lala) to be pretty delicious!

For those who're wondering: whenever I've dined with friends who are Muslim, seafood has been a good dining option at eateries that are not operated by Muslims.  Indeed, whenever a Singaporean Muslim friend of mine and I meet up in Hong Kong (where the meat of choice of the majority of the population is pork), we almost always head over to a Japanese restaurant for sushi!

So, in retrospect, I shouldn't have been so surprised that my mother's Malay friend would lead us to eat at an ethnic Chinese seafood restaurant at Kampung Pulau Betong.  If truth be told, I was disappointed at first when I found out that was the case as I had been looking forward to dining on some yummy ikan bakar for lunch that day... ;S
Posted by YTSL at 11:11 PM

Wow...That's a lot of seafood. I sure would enjoying eating there.
Coffee is on

You mentioning the muddy water reminds me of a sign at the lake near me saying that you shouldn't eat fish caught in the lake more than once a week and it goes into detail. That was enough for me not to want to ever eat fish from the lake.

I love seafood and these look delicious.

And as a person who actually ate street food in India (both North and Mumbai) I have no problems with anything (unless obviously unhygenic such as dirty vendors or flies swarming around).

That's indeed a lot of seafood. When the dishes first arrived at our table, I wondered if it all would be too much. But in all honesty, we ended up polishing off pretty much all of it -- and the dish of vegetables and bowls of rice that also were served too! :b

Actually, a couple of the people at our table decided they'd be okay with eating the fish but not such as the clams. Still, the truth of the matter is that none of us appeared to be the worse for wear later the day, the next day, etc.! ;)

Woah re your having eaten street food in India! I must admit to not having done so in Vietnam or Indonesia even while being perfectly comfortable doing so in Malaysia and -- yes, really -- Tanzania. ;)

Fish curry and some steam fish! And the dish of familiar looking fish closest to the camera ... is that same as Aji?

I think the fried fish is ikan kembung, which has variously been translated into English as Indian mackerel or chub mackerel. When fried, you can eat pretty much all of it, even its not too hard bones. :)

Following my curiosity I looked up Indian mackerel on Japanese Wikipedia, which surprisingly mentions ikan kembung and something called keropok lekor! Apparently it can be served as Sashimi too, if you're as brave as the Okinawans!

For what it's worth, I love fish keropok of all kinds. So I think I'll stick to having my ikan kembung fried or deep fried rather than as sashimi, thanks very much! ;b