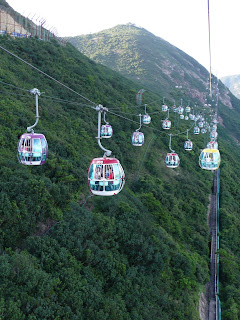 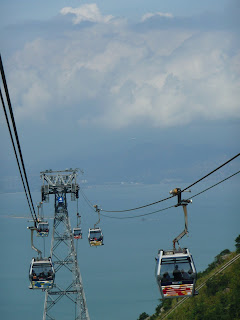 It's less than a week before Halloween; so if I were to be topical for this week's Photo Hunt, I'd go for some Halloween decorations that even Hong Kong is not spared. Instead, I've opted for sights related to a fear for primal and experienced by more than one person I know: that of heights that make it so that what should be fun cable car rides would be scary to them.

Good take on the theme although I kind of like ski lifts, it would be scary to be on one if it stopped too long in the air.

I love those, but I bet it would be scary if you think of falling from them.

That reminds me of the first time my son went on the cable car ride. He held on to the railings and refused to get in!! We had to carry him and the whole time he was clinging onto us!
The view up there is spectacular :)

That ride will give me a pang in my stomach but I'd love to try those.

I love taking cable cars. Although I'm afraid of heights but it is the fear that makes the ride so thrilling. haha....

Thanks and glad you managed to put in an early visit to my blog this week! :)

True, true -- so try not to think of such and, instead, just enjoy the views from them! :)

Teehee, thanks for sharing that story about your son!

So... when you (next) visit Hong Kong... (I'd particularly recommend Ngong Ping on a weekday.) ;b

I did not try that thing maybe one day i know it feels like scary...TC

i think i will scary riding that thing. BUT...the good is i can make lots of photos from up there :)

Please drop at my PH post also : in HERE. Thanks

Cool photos! I love the views but being up high IS a little scary. Great take on the theme!

Thanks for visiting mine and have a nice weekend!

You remind me that it has been awhile since my last cable car ride; I've not even tried the one going up to Genting Highlands!

Yes, this is quite scare, but once you are in it it's OK, at least for me, lol !

I've never actually been in a cable car but luckily I'm not scared of heights. Happy weekend

Yes heights can be very scary - swinging on a cable car in a high wind - YES ...

I've never been in one that small! Yeah, that would scare the cr__ out of me!

Thanks for stopping by...and yes, I was just a tad desperate this week. :-)

Liz has covered this subject too.
I may seem jokey about the Halloween pic but I trully loath the whole thing.
Seeing so many pods on a wire is Scary - like an SF movie scene. Or Bond.

And I love cable cars for the views they offer me... :)

You mean you were in Hong Kong and you didn't go for those cable car rides? Must admit that I put off doing so for a time myself... but more because I was scared of the queues for them than the rides themselves! ;D

Yup, lots of good photos to be had when on those cable cars -- in clear weather, that is. A friend of mine wasn't so lucky, reporting that it was misty during the Ngong Ping cable car ride!

Thanks back and you're welcome. :)

Am not sure if I've been on the cable car in Genting Highlands. If I have, it was decades ago! ;D

For the most part, agree with you. But was in a cable car one windy night in Taipei and... ;S

If you're not scared of heights, you should try going on one some time! :)

Swinging inside a cable car in any winds is scary... :S

We all get desperate at one time or another. But in your case, your sense of humor saw you through successfully! :)

As long as I can get in and out easily... The views would make it all worth while.

Hitchcock couldn't have done it better! How many of us have vertigo? Lots I bet!! That is totally scary! And great photos too!
Happy weekend
L

I would like to try that one for sure :)

I don't mind cable cars too much unless they sway... But the views are incredible, so sometimes it's worth it.

At least another type of scary. The scary height on a cable car...

i wouldnt like to look directly down. is scary

Excellent take on the team and I felt very much at home as I love to be brought on top of the Norwegian mountains like this :-)

Mine's posted too, if you can find time to stop by. Happy weekend.

I was scared to ride the cable car too when I was in HK too because I was alone maybe when I have company I will ride! Take a visit at my scary pic too :) Happy weekend!

Now there's a scary I could enjoy! What a fabulous view, too!

Yow!!! I would find being up that high, at the mercy of cables and machinery, to be very scary! No thanks!

I hope you have time to come see my scary photos, and leave your link, too. http://newyorktraveler.net/photo-hunters-scary/

O my. That is definitely the scariest one I've seen this morning! I DO NOT like heights! My scary post is up at http://www.homeschoolblogger.com/prodoceo/609837/

Agreed re the views making it all worthwhile. :)

Thanks for the compliment -- I especially love since I'm a fan of Hitchcock. :)

Well, come over to Hong Kong then! ;b

The scary thing is when I looked down directly at one point during the Ngong Ping ride, I saw this exhausting looking hiking trail... ;b

From accounts I've read, Norway sounds like a beautiful place. Hope to make it out there some time... :)

Did indeed stop by your place (even though it's past midnight here already)... ;b

I went alone but rest assured that you don't sit in a cable car on your own -- instead, you share with others! ;D

Indeed, and happy weekend to you too. :)

Bet you would get a lot of great shots out of the experience... :)

Hmmm, I think you can be safely identified as one of those with a fear of heights... ;b

Exciting and cool are more how I'd put it! :)

Woah, quite the compliment you paid the entry there! ;b

Heheh re the way you phrased your reaction! ;b

Mom is scared of those things, but she goes on them anyway!

Yeah, those cable cars can be pretty scary especially when the stop and swing for a while.

If you suffer from arachnophobia, don't check out my site. ;)

Now I cannot go in these things at all. Swaying up so high. We did have one fall of a ski lift here some years ago with nasty results. Much scarier than Halloween decorations YTSL. Have a good weekend.

been there! but the cable ride didn't scare me though. what scared me is the turbo drop ;)

Be scared, be very scared!

yeah, uh, no thanks, I like my rides to be more below ground, preferably on the ground, not a big fans of such rides

Good on your mom! ;b

I definitely think your spider is scarier than my cable car rides!!! :O

How about ferris wheels and rollercoasters? My sister's fine with rollercoasters but, as a child, would be freaked out by cable car rides.

I went on a turbo drop in Genting Highlands. Almost suffered heart failure during it. Worth doing once but never again!

You're missing out on great views if you don't though... ;(

Hello, Have a nice weekend!

I'm split in two about cable car rides... I AM scared of being suspended in mid-air, but I guess the views balance that out.
(Un?)fortunately we don't have cable cars in Malta LOL!

You too! (But hmmm, you have nothing to say about my Photo Hunt entry? :()

Well... I think there's an age limit for those rides but think your 4 year old's got the right idea! ;b

For me, the views often are worth it. And also in some cases, it really would be a hassle to get to the destination any other way!

I got caught on a lift once when it stopped running. It wasn't really so scary but that uneasy feeling kept growing the longer we hung there being completely unaware of what the problem was and how long we might be there.


Baker
(Thanks for dropping by earlier)

I've been in a lift that temporarily stopped too. *And* a rollercoaster. But, fortunately, not a cable car ride! :)

Hmm... seeing how the cable car being operate... I do feel scary. :) Nice theme for this week.

I was late for this week ^^

Thanks -- and better late than never! :)