You may have heard the joke about waiting for ages for a London bus, only for three to then come along at once.  Well, at this time of the year, it certainly feels that way with Hong Kong festivals.  For not only has there been two public holidays here within three days this week but today, two days after May Day, sees the celebration of Buddha's birthday (as calculated using the Chinese lunar calendar), Cheung Chau's famous bun festival (which includes a race to collect as many buns from a bun tower and also a parade featuring "floating" children among the participants) and Taoist sea deity Tam Kung's birthday (which is a particular big deal in the old fishing village of Shau Kei Wan).

It's been some years since I last went to Shau Kei Wan on Tam Kung's birthday.  And it was interesting to see how much of the festivities seemed familiar but also how much more I was able to notice, now that my Hong Kong cultural knowledge has increased.  With regards to the former: I think I actually noticed certain "lions" and "dragons" which had caught my eye in previous years!  And with regards to the latter: for the first time at the festival, I got to realizing that all the "creatures" (be they "lions", "dragons", etc.) make ritual bows at the entrances of the temples they pass along the parade route.

In addition, I actually don't recall the parade transport for the drummers for the lion and dragon dances having been as elaborate some eight years ago as they now are.  But as far as this shutterbug is concerned, it's very welcome as it adds one more impressive element to one of my favorite festive parades to take in -- not just in Hong Kong but the world! :b 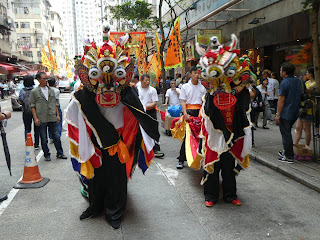 Are these unicorn dancers I see before me? :O 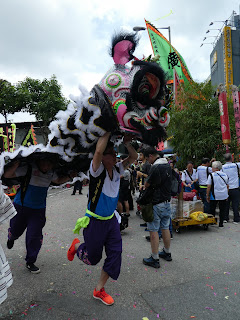 The most fleet-footed lion (dancers) I've ever seen! 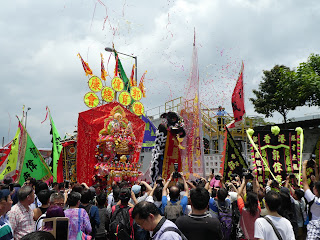 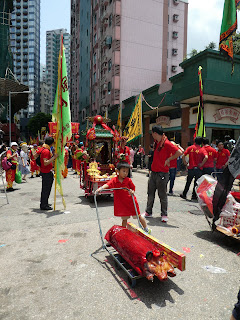 Yes, roast pig offerings are part and parcel
of the Tam Kung Birthday parade! ;b 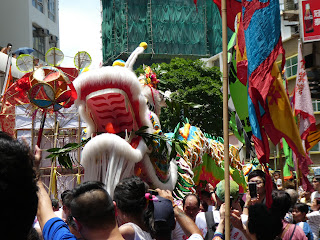 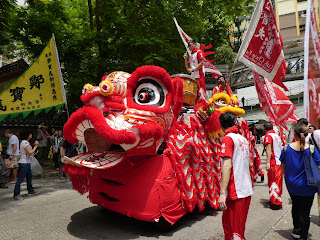 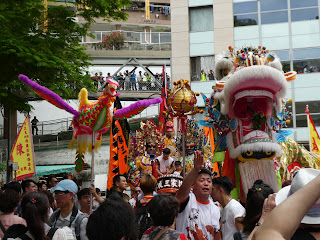 Dragon, phoenix, Monkey God and other deities on parade! 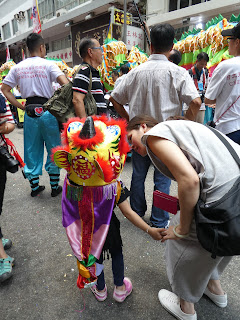 By-standers would probably need ear plugs for protection for these celebrations as there would be a clash of different drum & cymbal sets for different styles. We are lucky they do not do Fire-Crackers in urban areas. If this was celebrated in remote areas, they might usually be accompanied by loads of fire-crackers, despite the ban.

I get that all the drumming, etc. would not be for everyone but I absolutely love it. So no ear plugs for me at the Tam Kung birthday parade! ;b

Good for you then. But that was an open-air venue. With sufficient spectators around at least some of the sound waves would be absorbed. Not too bat. What I really meant are those drummers and cymbal players. They should have some protection as they are right at the epic centre.

Maybe it's just me getting old. Loud noise hurts these years.

Yeah re those drummers and cymbal players. But I'd worry more in this regard to members of drumming troupes such as Japan's Kodo and Taiwan's U-Theatre. There have been times when attending their concerts -- and those of other taiko drummers -- where I could feel my ear drums vibrating -- and I was in the audience and not as close to those drums as the performers!

If big drums are concerned, you should be able to feel them as lower frequencies would attack your body directly. If you are into Drum troops, take a look at this https://www.google.com.hk/search?q=%E7%B5%B3%E5%B7%9E%E5%A4%A7%E9%BC%93&rlz=1C1LENP_enHK673HK673&source=lnms&tbm=vid&sa=X&ved=0ahUKEwjCiKyfitnTAhWKV7wKHXTGCusQ_AUIDSgE&biw=1122&bih=622

Thanks for the link... but nothing beats seeing and hearing a drum troupe like Kodo live -- and it's one of the great things about living in Hong Kong that I get to do so at least every once in a while! :)