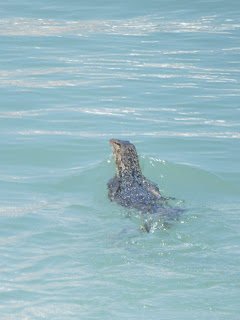 Not the kind of creature one expects to see
swimming in the waters off George Town! :O 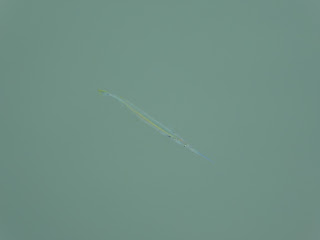 Ditto re this other exotic creature whose colors get me
thinking of the Penang flag (and Tanzania's too, actually)!

Decades ago, when my family took the ferry from Penang Island over to the West Malaysian mainland (or vice versa), I'd go stand on the side while the ferry in motion and eagerly scan the waters for jellyfish and other interesting looking aquatic life as well as take in the panoramic views that unfolded before me.  On no occasion that I can remember, however, did I ever catch sight of the kind of creatures that I did while standing on the shore meters away from the George Town ferry pier on my most recent trip back to my home state.
While I've seen monitor lizards before (including in Bangkok's Lumpini Park and intruding into the garden of my family home in Penang!), I'd never seen them swimming in the waters of Penang Strait.  Even weirder was that the area where I spotted this large reptile which can easily be mistaken for a crocodile when it's in swimming mode is pretty built up and urban, with a mainly concretized waterfront just meters away from the Tanjung City Marina and Swettenham Pier Cruise Terminal!
Then, as I was calming down after the shock of spotting that rather scary looking lizard in a part of Penang where I didn't expect to see any wild creatures casually roaming about, I actually spotted what to my mind was an even more unusual critter in the nearby waters: one whose species I even am unsure about.  For while my initial impression was that it was some colorful kind of squid, my aunt, who was with me at the time, is pretty adamant that it's actually particularly sharp nosed fish!
I realize that my photo of it is not the sharpest -- and it doesn't help that the waters of Penang Strait is not among the clearest out there.  But I'd be grateful to those readers who click on the image near the top of this blog post to get an enlarged view of the creature -- and truly grateful to whoever can actually positively ascertain what it in fact is!  So... any takers?  I do hope so! :b
Posted by YTSL at 11:55 PM

The shape of the individual look similar to this:

Thanks much for the information. Previously didn't know about flutemouth fish, trumpet fish or cornet fish -- but now I do! ;O