Musings on a bike ride between Sha Tin and Tai Po 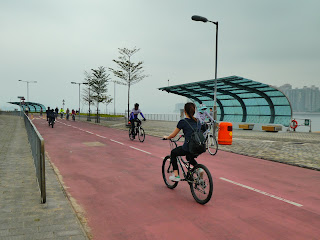 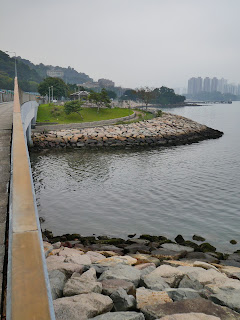 The majority of the bike path is by the water's edge 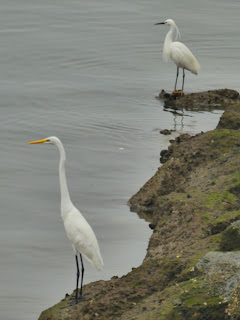 Also by the water's edge were this Great Egret in the
foreground and Little Egret in the background :)


I really should do this more often.  That's the sentiment that kept on popping into my head when I went bike riding in the New Territories for the first time in over a year.  And this even though the afternoon I chose to do so had overwhelmingly gray skies and occasional sprinklings of precipitation.


Something else that kept on popping into my head while cycling from Sha Tin New Town to the old market town of Tai Po this time around was a song I learnt to sing (and play on the piano): Daisy Bell (A Bicycle Built for Two); and this even before I actually saw a couple riding on a tandem bicycle on the bike path!  In addition, a good measure of how much I remain in the thralls of Funassyi mania can be seen in my having visions of the Pear riding a bicycle in New York and various parts of Japan (including its hometown of Funabashi) while out riding myself in Hong Kong!

As unlikely as it may seem, there were quite a number of people out bicycling that day.  I guess it helped that the temperature was actually pretty pleasant: warm enough for the likes of me to go about in shirtsleeves (just days after it felt cold enough for me to need to put on my Norwegian sweater made for a climate where summer temperatures can be in the single digits on the Celsius scale!) but still enjoyably breezy enough that one didn't actually sweat buckets on the approximately 10 kilometer ride (and for some of the migratory birds to remain to decide against flying off to cooler climes).

A few people, some with pretty substantial looking loads on their vehicles, appeared to be using their bicycles for serious purposes that afternoon.  For the most part though, the riders I saw along the way looked to be leisure cyclists, even if some of them were kitted out like they were taking part in a competitive bike race!

It's been said of the Japanese that they get seriously costumed and equipped for whatever leisure activity they take part in: be it golf, tennis, mountain climbing, bicycling or what-have-you.  From personal observation, I'd say that this is true too of a substantial percentage of Hong Kongers.  All in all, both these cultures sure do seem to take play seriously: in terms of wanting to (appear to) do a good job of it as well as being willing to genuinely let their hair down when the time and opportunity allows! ;b
Posted by YTSL at 11:59 PM

Egret looks so graceful. When I was doing ceramics I have some egrets and seam to be quite popular.
Our weather now warming up and been quite a few good day for walks.
Coffee is on

Egrets do seem to be among the more graceful of birds. I think it's because they have such long necks but they also have the kind of air that makes it seem like they can rise above the mundane and chaotic! :)

Do you have a bike or is there a nearby place to rent bikes? If so do the rental places give you maps of different places to ride? Do you have bike riding attire??? Do people wear helmets like they do here?

I rent bicycles at shops near bike trails located in places like Tai Wai, Sha Tin and Tai Mei Tuk. They don't usually give you maps so I bring my own but it's difficult to get truly lost if you stay on the designated routes. And yes, some people wear helmets but I never have, to be honest! Also, I just wear things like t-shirts and cargo shorts when cycling... like I do when hiking! ;b