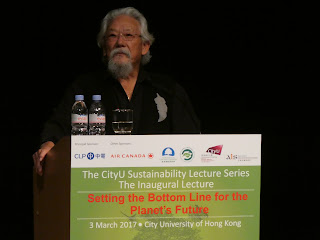 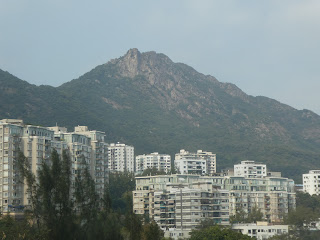 The view from just outside the lecture hall where he spoke :)
This afternoon, a friend and I went along with a number of others to hear an energetic 81-year-old man who had flown over from Canada speak passionately about our planet and our species.  David Suzuki is a scientist, broadcaster, author and environmental activist.  Considered by his countrymen (and women) to be one of the greatest Canadians ever, he is an eloquent speaker who is unafraid to admit when he doesn't know the answer to a question and bold enough to show righteous anger against people he considers to not have the most helpful frame of mind.
Early on in his lecture, Dr Suzuki spoke about how the Earth is shaping up to warm up faster this century than it has ever done before, many species of animals and plants having gone extinct in recent years, of coral reefs dying, and of how, as water warms up, it expands, which means that so much land will be underwater before too long.  Still, rather than overly worry about the fate of the planet, he's actually quite confident that the Earth will be around for a long time to come.
Instead, it's the human race that he's concerned about.  More specifically, he reckons that, the way we are going, humanity may become extinct before this century draws to a close!  What's more, he hastened to point out, he's not alone in harboring such thoughts; with the similarly eminent likes of Britain's Astronomer Royal, Lord Martin Rees, estimating humanity's survival past the 21st century as just 50:50!
To hear David Suzuki speak, it should be obvious to pretty much anyone with a functioning brain and sufficient education that what humans need are clean air, clean water, healthy food, and healthy soil (for plants that we eat, and also the animals we eat, to grow).  So why is it that humans seem so willing to pollute the air, water, soil and even food that's produced?  (More than by the way, doesn't it say a great deal that he was told by people to make sure to drink bottled water -- like that placed on his lectern -- when he's in Hong Kong?)

One of the reasons stems from it being so that somewhere along the line, we've become programmed to prioritize the accumulation of wealth and status above everything, even our individual health, that of other people, and that of the planet as a whole.  We've also come to think of humans as being distinct from nature, as surely not an animal as well as not a plant.
But the truth of the matter is that human existence is actually predicated on the health and wellbeing of the environment as well as other people.  And, as he's had to point out to people: the fact of the matter is that humans actually are animals too, with all that that implies. (More than incidentally: it really is true that one of the three core anthropology courses I took at my alma mater was entitled The Human Animal, after having been known in older, more sexist times as "Man, the Animal"!)

Something Dr Suzuki also marked out as pretty ironic is how humans seem to not think too much about adversely impacting nature, yet seem to think that human creations, such as the dismal science whose English name comes from the Latin word for "household management", have immutable laws.  Maybe even more so than politicians, economists (and CEOs of such as oil companies) are the environmental activist's enemy.  If only, he lamented, he could get economists to emphasize the "eco" that's in economy as well as ecology!
Even some hours on, I'm not sure whether I should have come away from David Suzuki's lecture feeling heartened or depressed.  On the one hand, he totally acknowledges that getting most humans, particularly adults, to change their mindset into one that prioritizes the Earth rather than their own selves, companies and/or groups, is pretty difficult, sometimes seemingly well nigh impossible.  On the other hand, he also believes that the knowledge to save the planet and humanity is actually already out there, and completely implementable if the will to do so exists.
If he were to be selfish, he could actually afford to not care since, in noting his age, the projected extinction of the human species will only occur decades after his death.  And, actually, the same applies for many of the people who were in the lecture hall this afternoon.  At the same time though, some of the secondary students in the audience could concievably expect to still be alive when the end of the 21st century comes along.  And I hope that it won't be too late to save humankind by the time they come of age, never mind the generation or two that will come after them.
Posted by YTSL at 11:26 PM

Our weather is all mix up. We still have 3 feet of snow in our yard and I wonder if spring is ever to come.
Coffee is on

And to think that the likes of Donald Trump still don't believe in climate change when the weather is getting crazier and more unpredictable by the year... :S

While watching Dr. Suzuki speak, I was very happy to see that he did not drink from the plastic water bottles placed for him on the podium, but chose to drink the water in the glass instead. As humans, we need to be more aware of our impact on our planet as we obviously are the "invasive species". Eventually we will make ourselves as extinct as the plants and animals we invaded and destroyed.

I don't think I was watching the water situation as closely as you but I have to admit that the impression I got was that the water in Dr Suzuki's glass had come from one of those plastic bottles. Wherever it came from, I don't begrudge him drinking some water during the event as he sure did a lot of passionate speechifying. And I totally agree to you that we humans need to be more aware of our often negative impact on the planet and how we obviously are an -- actually even THE -- invasive species.

Ha ha! Yes, I am a water bottle stalker! In my observation, both bottles were full and unused, but I'm not certain where the water came from that was in the glass. I was just impressed that he only drank from the glass...

Good on David Suzuki then, and you as well for being so eagle eyed! ;b