Prior to my having caught the hiking bug in Hong Kong, I didn't know what stink bugs looked like -- forget the kind of position that comes naturally to them when they engage in procreation!  -- or that creatures such as skinks and lantern bugs existed.  Heck, I didn't even know that the Big Lychee is home to so many kinds of snakes, some of which are at home in the water and quite a few of which are poisonous, as well as truly large spiders whose leg span may be wider than my face and frogs that make sounds so large that they can be mistaken for construction work noise!

Among the more amazing things about Hong Kong to me is how rich is this territory's biodiversity.  Close to 300 hikes on, I still feel that it's completely likely that I'll spot a bug or some other critter that I've never ever seen before on my next outing in one of Hong Kong's 24 country parks and/or 11 designated "special areas", or even green spaces outside of their boundaries such as the Bowen Road Path.  After all, here's a sample of the wildlife (some of which I still can't put a name to!) that I managed to see, and photograph, in the space of less than two weeks, and all without leaving Hong Kong Island:- 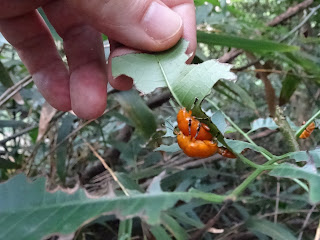 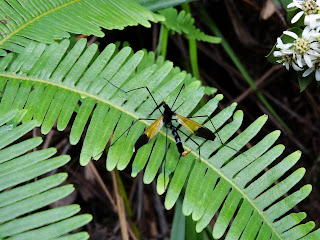 Did you know there's such a thing as crane flies,
and they (can) look like the critter in the above picture? 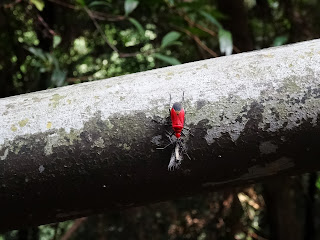 A stink bug with what looks like a dead caterpillar in its mouth ;S 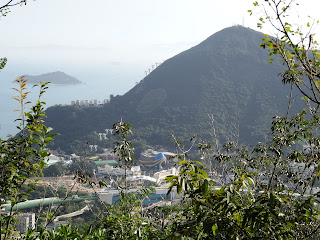 A sea horse (logo) spotting! (Sorry, I couldn't resist including
this view of part of Ocean Park from the carnivorous stink bug hike!) 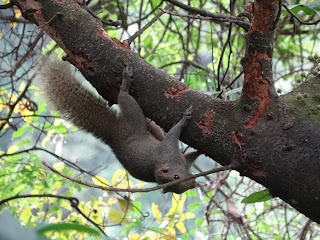 Yes, there are squirrels in Hong Kong! ;b 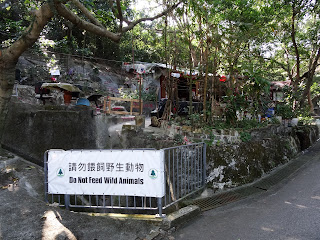 As strange as it may sound, there are Hong Kongers who disregard
signs like this to feed wild boars, not just stray cats and wild monkeys! :O 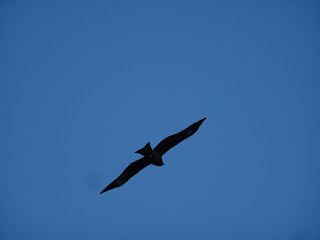 Black kites in flight always strike me as a magnificent sight :) 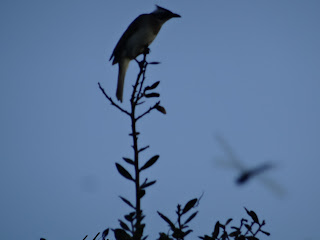 Two for the price of one: a bird on a perch,
and the dragonfly that photobombed my shot! ;b
Posted by YTSL at 11:47 PM

Our stink bugs are more brown. I wonder how many stink bugs they're. Well not much bugs now to much snow.
Coffee is on

There are many different kinds of stink bugs even in Hong Kong. I've taken pictures of brown ones here before but the mainly red ones are quite a bit easier to spot!