Among the reasons why many people in Hong Kong like to go hiking is so that they can be temporarily away from the concrete jungle.  So imagine their horror and frustration when these folks get into Hong Kong's country parks and encounter concreted trails galore!

For my part, I sometimes am fine with hiking along a concrete or paved trail on a rainy day (or even the day after a super wet and rainy day, when unpaved trails would be super muddy and/or slippery).  But it's also true that I do have a fondness for Hong Kong's old boulder trackways along with an appreciation of the history they represent and outright admiration for the efforts of those who created them.

Among the best preserved of these can be found in Ma On Shan Country Park, in the vicinity of Tai Ping Tsuen and Mui Tsz Lam.  And the added benefit is that this is one of those sections of Hong Kong which feels far from the madding crowd, who either have elected against doing any hiking or, if they do decide to venture into the countryside, tend to fixate on going along such as the Maclehose Trail (despite a number of its sections having been paved and concreted over) rather than a less well known path... ;b 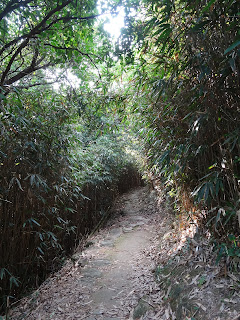 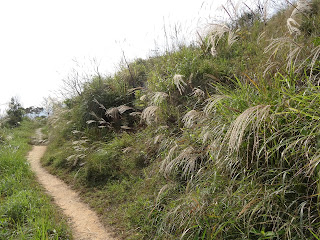 Unpaved but easy to go along on account of the trail
being fairly level and also obvious at this point! 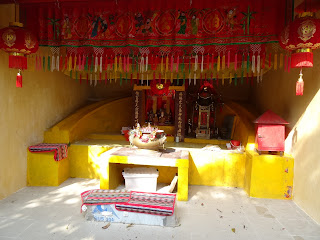 A colorful shrine to Taoist deities erected along the way 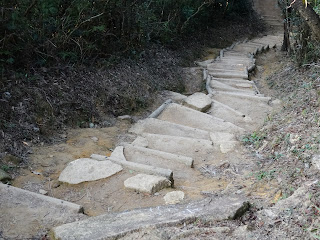 Artificial but not unpleasantly so? 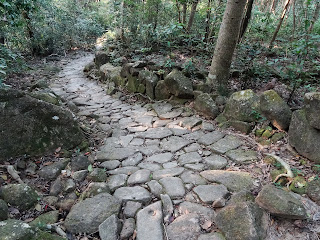 How much effort and skill went into building this? 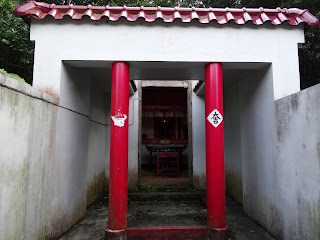 A still well-maintained place of worship 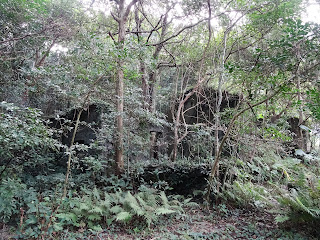 In contrast, little of the old village's domestic structures remain 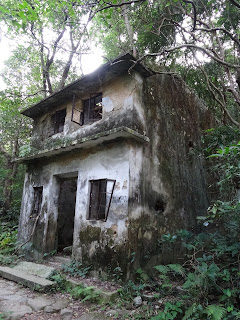 One can but imagine what stories these walls
could tell if only they could talk...
Posted by YTSL at 10:45 PM

Wonderful photo essay. Enjoyed the photos of different types on trails. Do you have a most and least trial surface? Larger stones embedded in the ground I find hard to walk on. Your photo of the abandoned home with the vegetation(?) on one side will stay in my mind for awhile.

Thanks for checking out and appreciating this photo-essay!

I'm okay with most trail surfaces but really dislike going down steep unpaved paths with slippery pebbles strewn all over them or, worse, seem composed of bits of sand and stone that break off/away when you tread on them. Also, am not a big fan of stretches of trail that get muddy and waterlogged after the rain/during the rainy season. And if you're wondering: if I'm hiking after a rainy spell, I do sometimes feel grateful for the existence of concrete paths in Hong Kong's country parks. ;S

The worst paths should be those with slippery mud resembling the look of peanut butter. The issue with these kind of mud on a wet day is that they tend to stick to the sole of your hiking boots or shoes and the grow bigger and bigger, making your steps extremely slippery and sticky at the same time. You would either ended up pulling your foot out of your shoe, or slide yourself bottums up down the slope.

a few years ago I ran into one of these on my way from Lin Far Shan (Lantau) towards Nui Por Shan and nearly fall down the slope. My subconscious managed to unleash my left fist towards the ground behind me, making a three point awkward landing which stopped the fall.

Anyway, if it is not that wet that trail is actually quite nice.

The paths you describe do sound awful. But I must admit to really disliking going down paths whose surface is strewn with lots of slippery pebbles. Probably worst of all was the trail uphill that a friend led me on sometime back, a part of which literally broke away and disintegrated after I stepped on it! Let's just say that I never allowed that woman to lead me on a hike again after that day! ;S

For that particular path only a few short sections are difficult when it is wet. The rest are alright. It's not as popular as the Lantau Trial that go up Sunset Peak though. last time I went that way it was pretty dry. I only encounter less than ten (10) persons along the way. I accidentally dropped my blue tooth headset and one of my walkie talkies and didn't realize it until I was a bit more than a kilometer away. I have to double back and pick them up again, making the trip around 20 Km.

If you go up from Silvermine Bay, it may be an all day hike if you generally hike comfortably. The trail would go down to Pak Mong. By then you may opt for going back to Silvermine Bay, or go to Tung Chung.

I looked at the map and the easiest looking way to get up to -- and down from -- Lin Fa Shan would be via the eastern end of Lantau Trail stage 1. See that the trail between Pak Mong and Por Kai Shan and a bit beyond is marked as a dotted orange path. What's that like? I've had some okay experiences with dotted orange trails but also some hairy ones and, given a choice, tend to prefer to go up than down along them!

The last leg of the slope down to Pak Mong might be a little bit tricky if it is wet and in the dark. I was a bit nerves when I went there the first time, but I ended up alright. Beginners might have some down-slope issues at the very last 10 metres or so.

Going down from Por Tai Shan are primarily irregular steps. But if you keep a slow descending approach, you should be fine. Just bear in mind, if you start from Silvermine Bay Pier, this would very likely to be an all day hike.

If one is fit I guess they may have done it in less than six hours. Last time when I was there back in 2015, I start at around 0922 hrs and reach the Mall in Tung Chung at 1915 hrs. When I was in my early twenties I could take the Lantau Trail from Silvermine Bay to Tai O in about eight (8) hours. These days I am a slow hiker. Even slower if I hike in Summer.

Thanks for the info. I'd rather get the more difficult part out of the way earlier on. So it sounds like if I were to go for variety and try going up Lin Fa Shan using a different trail up then down, I could go up first via Pak Mong and Por Tai Shan, then down via the Lantau Trail down to Nam Shan. To be honest though, it still does sound rather formidable and time-consuming... though maybe less so than hiking Pat Sin Leng?

Yes, you may start at Pak Mong and then go up Po Kai Shan, then Lin Fa Shan and back to Silvermind Bay. But that would seem you would have to go to Pak Mong either by Taxi or Maxi Cab (if they have one such route. Have to look it up though).

The path to go up from Pak Mong is right next to the now dis-used rubbish incinerator. I think you should be able to look up the trail online. Your country side map should also have it marked as a dotted line.

There would be sections of bushy path at first, there would be gullies too. But once you have gone up to two or three small hills, you would start hiking up boulder steps along some sort of ridge line. Going up this way could be tough if it is wet and hot. But it would also be tough going up from Nam Shan. Expect irregular steps.

Do more research about it before you go, and be prepared. You would likely need a bit more water and snacks along the way. Bring along your hand held torch, or head light (I prefer head light). Better get a few friends who could endure a full day hike with you just in case.

This route is longer than Pat Sin Leng\Wong Leng\Hok Tau or Sha Lo Tung. The issue is no safe exit route from the mail trail. There are actually two other paths leading down the slops towards Tung Chung, but these two paths are treacherous. You should be able to trace them from on-line maps, I think. One of them go through the imfamous Pok To Yan ridge, which is not desirable going downwards.

On the other hand, if you skip the peak of Lin Fa Shan, the trail may be shortened by a kilometre or two.

There's a bus that runs between Pak Mong and Tung Chung. It's sadly on the infrequent side but I've been on it once.

More re this Lin Fa Shan expedition: It's really intimidating now that you've told me that it's lengthier than the Pat Sin Leng hike. I guess it'll be something I need to work up too. Hopefully, my hiking abilities will keep on improving with each year doing so in Hong Kong!

For two hours you could walk from Tung Chung to Pak Mong very comfortably and with time to spare.

Anyway, I would suggest to go early and hop on the 1000 hrs one by the latest if you intend to start from Pak Mong. Remember, there is no safe exits between Pak Mong and Lan Tau Trail. The last replenishment point would be the village stores in Pak Mong village. But you should expect Tung Chung to be the last one as you just don't know if the stores are opened until you are there. Also, no public toilets after Pak Mong Village until you reached Nam Sham.

Be cautious, be prepared, and have fun.

I've hiked from Tung Chung to Pak Mong and then over to Mui Wo. That's more the usual length and difficulty of the hikes I go on! I also tend to buy drinks, etc. before I start a hike. As for toilets: well... if nature calls and one is surrounded by nature...! ;)