Meditations on cruise ships and their impact 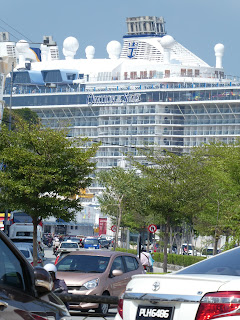 The kind of cruise ship that's hard to miss! 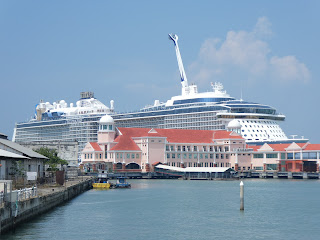 The Ovation of the Seas dwarfs most other cruise ships I've seen
to date, and much of its surroundings when docked at Penang's port! 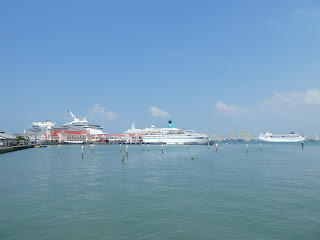 As astounding a sight to me was that there were not one
but three cruise ships in port in Penang that day :O

You know a cruise ship is big when it can get mistaken for an apartment building.  And while it's true enough that the error occured when it was viewed from a distance and partially obscured by existing structures, it's also the case that the vessel in question spotted docked at Penang's Swettenham Pier Cruise Terminal last week happens to be the sixth largest cruise ship currently in existence!

With a maximum capacity of 4,905 passengers (and goodness know how many crew members), the Ovation of the Seas is, the kind of mega cruise ship I'd expect to see visiting Hong Kong -- the most visited city in the world -- but not so much Penang, where tourism is a big deal but still not that mega as far as overall numbers go.  So imagine my amazement when I saw that Royal Caribbean vessel in port in Penang that day and also two other cruise ships at the same time!

If truth be told, I hadn't realized that my home state had the port facilities to deal with such a mega cruise ship.  In addition, while I can see certain government officials -- particularly those who think big is better and that anything record-breaking would be a good thing -- would welcome cruise ships docking in droves in Penang, one only has to see the recent furor over the prospect of some 10,000 cruise ship passengers visiting Penang in a single day to realize that this is not something that all the locals are ecstatic about.

Back in the summer of 2015, my mother and I enjoyed cruising about the Norwegian coast on the Hurtigruten's MS Richard With.  But I truly believe that one big reason why we had such a great time in Norway was because that vessel was not a mega cruise ship (or, for that matter, a conventional cruise ship featuring all manner of bells and whistles in terms of facilities).

Because the MS Richard With is not a super size ship, it could sail into fjords like the UNESCO World Heritage-listed Geirangerfjord and even narrower Trollfjord (where it was actually able to admirably execute an 180 degree turn) that larger vessels could not.  Consequently, the likes of my mother and I got to see far more amazing scenery than if we had been on a bigger cruise ship, like quite a few of those we saw in Norway and heaved a sigh of relief that we were not passengers on.

Something else I noticed while in Norway was that certain smaller towns that the MS Richard With docked at would feel way too overwhelmed by a larger number of visitors suddenly descending upon them in more or less one fell swoop.  All in all, I could imagine locals getting stressed out, including those assigned to service the visitors, and the visitors also coming away feeling with a less than optimal touristic experience courtesy, among other things, of the town they were visiting ending up having more tourists than locals at the time of their visit!

Going even further back in time: decades ago when I was living in Zanzibar, a senior government official told me that while they were happy that cruise lines were putting this storied Indian Ocean isle on their itinerary, it was imperative that they made it so that passengers of cruise ships docking at its port would have time -- and consider it worth their time -- to venture further away from the port area than they thus far had been doing.  More specifically, he said that for it to be worth Zanzibar's while to host those cruise ships, the passengers needed to be visiting, dining out at and otherwise patronizing more local than foreign-run establishments.  Otherwise, Zanzibaris would only have the hassle that came with the increased traffic and such but not the benefits.

I often have thought about that wise Zanzibar official's words when contemplating many a regular Hong Konger's dislike of, and disdain for, the millions of visitors from Mainland China that pour into the Fragrant Harbour annually.  And I definitely hope that tourist arrivals in Penang can be handled more responsibly and intelligently than it observably has been in Hong Kong.  In the latter case, I think spacing out cruise ship visits would be a step in the right direction.  Otherwise, as we have seen too often, too much of a good thing can make it become unpopular, unwanted, despised and just outright bad. :S
Posted by YTSL at 9:00 PM

I your photos, but you're right to be concerned about the "impact" of cruise ships, especially megaships, which certainly do resemble "apartment buildings". This is so far removed from the Golden Era of ocean liner travel in the 20's and 30's.

I recall reading a guidebook which humorously referred to crowds of tourists as "blitzkrieg tourists". When these ships unload their passengers, I guess they can overwhelm the town. And I'm sure the ships leave behind plenty of pollution.

It is ironic that you mention Royal Caribbean because last week here in FL, I was taking photos of two Royal Caribbean ships. Afterwards, rushing to catch a bus, I fell down and broke my shoulder. I'm going to be in serious pain for awhile. My Lumix died in the impact, so I'll probably upgrade to the newer model you have.

I hope you aren't in too much pain and will get better soon! As for cameras: I have to admit that I'm still not completely in love with my current Lumix, though I'm hoping that I will grow fonder of it in time.

Back to the subject of the cruise ships: I think a good measure of the mega size of the Ovation of the Seas is that when I saw the Queen Mary 2 here in Hong Kong yesterday, I thought it pretty small in comparison to that Royal Caribbean vessel I saw in Penang last week! :O