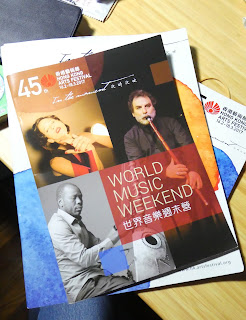 The concert program for the Hong Kong
Arts Festival's World Music Weekend
A little more than a month ago, I attended the opening concert of this year's Hong Kong Arts Festival one day before the 2017 edition of the fest officially got going if the listed dates are to be believed.  So it seemed appropriate enough that I'd attend one of the three concerts collectively billed as making up the World Music Weekend taking place today despite the final day of the annual mega performing arts feast officially having been yesterday!
Kora player Ballaké Sissoko is by no means the first Malian musician I've heard performing.  Some two decades ago now, a friend from Mali introduced me to the music of his country by playing me cassette tapes of performances by such talents as songstress Oumou Sangaré.  And, in fact, Sissoko's not even the first Malian musician I've seen and heard live; what with my having been there when Tuareg band Tinariwen wowed the audience at the Hong Kong Arts Festival in 2012!
While listening to Sissoko playing on his 21-string harp-like instrument (whose sounds I personally associate more with that made by the guitar), I couldn't help but get to thinking about my friend, his countryman.  The rippling sounds that flowed from Sissoko's kora also brought to mind the lyrical music I heard in Timbuktu, Mauritanian filmmaker Abderrahmane Sissako's affecting portrayal of Mali under the rule of foreign jihadists whose list of haram activities included music-making, however innocent and beautiful -- and made me feel ever so glad that the West African country is once more largely rid of those overly-puritanical religious extremists.
In addition, even though it's over on the other side of the African continent, one of Sissoko's sets got me thinking back to my time in Zanzibar all those years ago.  In particular, his music triggered memories of many an evening spent hanging out with friends on that Tanzanian island; not so much because it was like the music that got played on those occasions when we decided to just listen in silence rather than -- as we were more often to do -- lay back, gossip and laugh a lot but, actually, because it actually got me thinking of night-time in Africa itself.
Here's the thing: even when one lived in an urban area in that part of the world, one still would be able to see lots of stars twinkling in the black sky and have the air filled more with the sounds of people talking, sometimes singing, and going about mundane activities than hear such as vehicles moving around or other machines being operated.  And somehow, that African night scene was what Ballaké Sissoko's music conjured up in my mind -- to the extent that even when my eyes were physically wide open, it at times seemed like I was seeing something else other than the interior of the auditorium I was seated, and he was performing, in this afternoon!
All in all, it was quite the hypnotic experience; one which I'd love to hear if it was shared by others at this afternoon's concert.  This much I do know though: after the performance's conclusion, there was much clamoring by audience members for CDs of Sissoko's evocative music.  And, in light of my experience at the concert, it made sense to find that among those for sale was one with the title Musique de Nuit!
Posted by YTSL at 10:52 PM