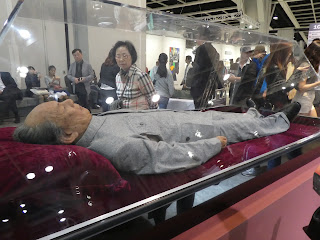 A scene from this year's Art Basel -- Hong Kong! 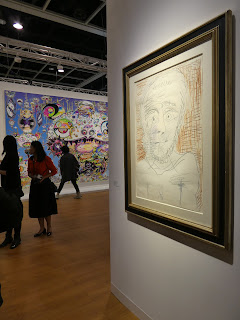 A Picasso and a Murakami in the frame 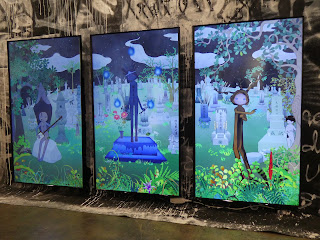 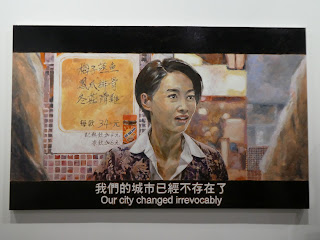 "People don't look like they're having much fun." That was the verdict of an artist friend I met earlier today at the fifth edition of Art Basel -- Hong Kong, Asia's premier modern and contemporary art fair -- and probably its largest too.

When viewed in the context of this event being big business for the 242 galleries from 34 territories taking part, there concurrently being many monied art collectors out there seeking to make good financial investments as well as "just" buy a piece of art because it happens to aesthetically speaks to them and a good number of the show's visitors being uniformed school students who were there for educational purposes, it makes sense that the atmosphere about the place was on the serious side.  In addition, I don't think it's solely my own bias that made it so that a large percentage of the works on display at the fair this year that I found to be of note were by dead people, had to do with death, or both!

Among the famous and also now very dead artists with a number of works featured in this year's Art Basel -- Hong Kong were Pablo Picasso (1881-1973), Alexander Calder (1898-1976), Andy Warhol (1928-1987), Francis Bacon (1909-1992), and Roy Lichtenstein (1923-1997).  Two other deceased individuals whose arts works I ended up standing for minutes in front of were Abbas Kiarostami (whose films I admire as much as his photographs) and Irene Chou (whose expressive ink paintings I'm somewhat embarassed to admit that I hadn't previously been familiar with).

Then there's the fact of Chinese artist Shen Shaomin's Summit, the installation work which look to have caused the greatest stir at this year's Art Basel -- Hong Kong, consisting of life-size sculptures of four dead dictators lying in state in plexiglass coffins and the now dead -- but still alive, when the piece was completed (in 2015) -- Fidel Castro lying on a hospital bed near them!

In addition, perhaps my single favorite booth at the fair was that of Japanese gallery Kaikai Kiki: which, somewhat surprisingly, more prominently featured works by the artist known as Mr. rather than parent company founder Takashi Murakami (who was well represented elsewhere in the show).  The initial impression was of bright colors, and kawaii and anime elements predominating the area.  But venture deeper into the booth and one will find a mesmerizing video work featuring unearthly music... and what look to be illustrations of spirits at home in a cemetery!

The somber frame of mind that came from viewing these works and also such as Ben Quilty's pieces documenting the Syrian refugee crisis may also have caused me to see darker meanings in certain works.  In this light, Chow Chun Fai's The Midnight After, Our City Changed Irrevocably looks to be a lament for what Hong Kong's (already) lost.  And the yellow umbrellas seen dotting the landscape in Bulgarian-born Christo's The Umbrellas (Project for Japan and USA) got me wistfully recalling a now past time when yellow umbrellas abounded in peaceful protest areas here in the Big Lychee.

Still, lest it be thought otherwise, here's stating for the record that I did enjoy the six hours or so that I spent at Art Basel -- Hong Kong today as well as get much intellectually from the experience.  Also, for the record, there were works by living artists (including the now 80-year-old Frank Stella and 52-year-old Anila Quayyum Agha) that caught my eye at the art fair.  And I hope that come next year, there'll be new works by them to enjoy along with what look to be increasingly strong representation of works by my old favorites! ;b
Posted by YTSL at 11:59 PM