Vignettes from a day out in The Hague (Photo-essay)

After spending a week in Amsterdam, I was raring to see other parts of the Netherlands.  So my German friend and I got an earlier start than usual one morning in order to spend a day out in The Hague.  Located 50 kilometers south of Amsterdam, the Netherlands' seat of government and third largest city feels both more stylish and quieter than the country's largest city and capital.

Blessed with wider avenues and less crowded streets than Amsterdam, strolling about The Hague's historical inner city was a real pleasure.  And even though we did do some more museum-going on this day trip, we also did spend time exploring the city itself and doing such as gazing into interesting shop fronts, occasionally venturing inside a few stores (including a wonderful-smelling bakery!), gaping at impressive old buildings and -- of course! -- posing a certain cute puppet plushy in some unlikely places! ;b 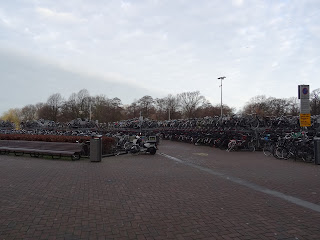 Just a small section of the bicycle park
outside The Hague's central railway station! 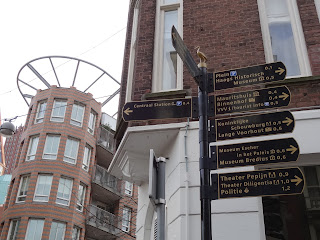 So many tempting attractions, so little time ;( 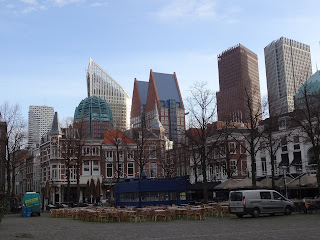 New and old architecture mix well together, as viewed from
the central square known simply as Plein (i.e. Square) 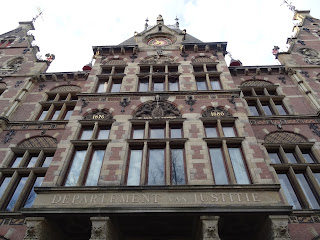 Among the buildings lining the Plein are ones that house cafes,
and also government departments like the Department of Justice! 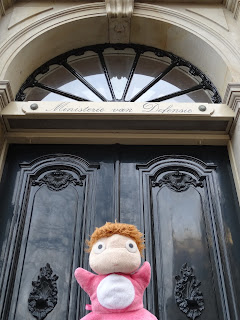 Unbelievably, Puppet Ponyo was able to get up close to,
and pose by, the main door of the Ministry of Defence! :O 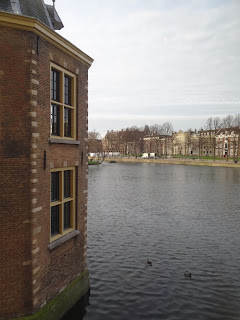 View from the Mauritshuis of a tower of the former castle that now
houses such as the Dutch prime minister's office and parliament,
part of the surrounding moat and nearby buildings 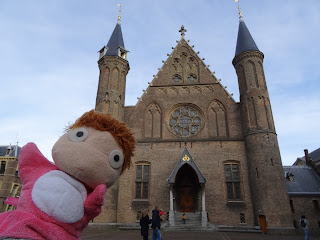 At the Binnenhof, Puppet Ponyo posed in front of the Ridderzaal
(Hall of Knights) that I had initially figured was a church or cathedral 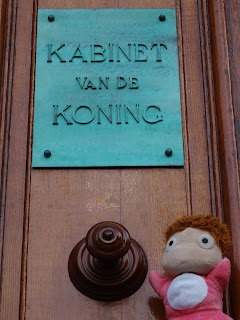 And here's the incorrigible one eyeing the doorknob
of the main door to the king's cabinet! :O
Posted by YTSL at 10:06 PM

Sound like your trip was a pleasure. I do love the brick work of the buildings.
Coffee is on

I did have a pleasurable time in Amsterdam -- thanks in no small part to the two good friends I met up with there. :)

This looks like an interesting day-trip away from Amsterdam...And Puppet Ponyo in three glorious poses, documenting what must have been a memorable day for her! The photo of her presenting the Ministry of Defense building is every bit as good as her classic poses in your Japan blogs. Well, at this point in her travel career, she has, in my eyes, transcended the mere cuteness-mascot-kawaii label to become a unique conscious entity.

Knowing what I do now, I'd actually have planned to stay a night or two in The Hague. As it was, I managed to pack in quite a bit into that day trip to that beautiful city -- so yes, if you wondered, I'm not done blogging about what I did there just yet!

As for Puppet Ponyo: I could almost hear her intone "I am the minister of defence" while she posed for that photo... Like I stated previously, she can be quite the incorrigible one! ;b