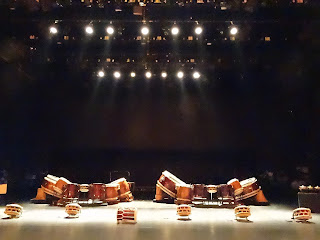 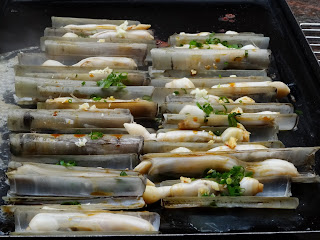 Barbecued razor clams were on the menu at
my favorite meal of last year :b


Best Boat Trip: In 2015, I managed to achieve one of my lifetime dreams: that of going on a Scandinavian cruise during which I'd get to see the famous fjords.  Norway's Hurtigruten may not be a conventional cruise line but my mother and I -- and many others of our fellow passengers -- reckon that it's all the better for being so.  Oh, and would you believe that I didn't realize, until after I got aboard the boat, that we'd be crossing the Arctic Circle while on it?! ;b

Best Book (Series): Shortly before my September 2015 trip to Japan, I bought my first book written by Jeffrey Archer in decades.  The day after I injured my toe in Takamatsu, I spent some time resting in bed and thanked my lucky stars that I had a copy of Only Time Will Tell to devour; only to curse like hell upon reaching the book's end and realizing that it was actually the first of a series of seven books, four others of which I promptly blazed through after returning to Hong Kong!  After finishing book five of The Clifton Chronicles, I nearly blew up with frustration upon discovering that book six will only be out in February 2016: for the fact of the matter is that the English novelist has got me seriously hooked once more, and anticipating the future installments of this series in a way that I haven't for a book since -- and, actually, maybe more than -- the Harry Potter books!

Best Concert: I had heard of Japan's taiko drummers long before I moved to Hong Kong but it wasn't only until I moved to the Big Lychee that I've had the pleasure of hearing and seeing them perform live.  In 2011, my favorite concert had a taiko drumming master serving up what came across as part musical performance, part martial artistic demonstration.  This past October, I actually got to attend a concert by Kodo, the amazing troupe based on the remote Japanese island of Sado, during which 11 taiko drummers beat out powerfully rhythmic music together on the same stage.  The sounds they produced were well nigh amazing, as were -- okay, I admit! -- the sight of the men's muscular arms and shirtless bodies... ;b

Best Dance Performance: This past November, I attended a performance of Ablaze! at Ko Shan Theatre which usually plays host to Cantonese operas.  That evening, however, the entertainment was supplied by South Korea's superhot Jinjo Crew, comprising B-boys (AKA breakdancers) and one beatboxer (2TAK).  And yes, their exciting performances did threaten to set the venue alight while the audience's loud applause sounded at times like it'd raise the roof!

Best Drink: One evening at Sake Bar Ginn, a good buddy brought over a bottle of sake that he had been gifted by a couple he had dinner earlier that evening to share with a few selected friends (including yours truly). When the bar's proprietor saw that it was a bottle of the Dashichi Sake Brewery's Myouka Rangyoku, she looked like she was about to faint.  As she revealed to us, that bottle retails for around HK$10,000!  When drinking it, everyone of us realized that it's a truly special sake.  And while I wouldn't pay HK$10,000 for it (or, for that matter, any bottle of alcohol!), I also can say without a doubt that it's the best drink I've ever had in my life, and probably will ever do so.

Best Film: As the end credits rolled during the first screening of Hirokazu Kore-eda's Our Little Sister that I attended, I told myself that I had to view the movie one more time before its Hong Kong theatrical run came to an end.  That's how much -- and quickly I realized that -- I adore this heart-warming drama about three sisters who invite their young step-sister to go live with them in a lovely old house in Kamakura.  Oh, and its big-hearted main characters now top my list of fictional individuals I wish were real and that I could hang out with! :)


Best Hike: Early on during my hiking "career" in Hong Kong, I went on what I came to think of as "the hike from hell", one that involved a white-knuckle ascent and even scarier descent down Buffalo Hill.  While I have no plans to ever go up (and, more so, down) that 606-meter-high mountain again, I've long wanted to venture again into that scenic remote area of Hong Kong where it is located -- and finally did so again last March, on a hike that took a friend and I from urban Kowloon all the way to the green outskirts of Sai Kung town.  And the icing on the cake?  The fact that we had around 40 kilometer visibility in the Big Lychee that day. :)


Best Meal: A couple of years back, a friend hosted a barbecue party at his apartment complex which was a lot of fun.  One Sunday a few months back, he again gathered together a group of friends for fun times that involved a lot of drinking and eating.  On this occasion, there was again much laughter and quite a bit of quaffing of alcohol.  And with foodies (including a professional cook) in the group, the food was definitely pretty memorable too; in terms of the quality and also the multicultural assortment which included various types of kimchi (including those containing octopus, not just vegetables), Chinese panfried dumplings, South African boerewors, Wagyu beef, and juicy razor clams barbecued to perfection!

Best Museum: I visited more museums in 2015 than I've done in years.  Some of these, particularly those found in small Norwegian towns, were on the small and often amateurish side.  Then there was the Rijksmuseum, which was so big that after spending several hours there, I felt that I still had only managed to go through just 1/20th, if that, of its galleries!  And even in just my first hour there, I could already well see that this was a museological institution whose contents weren't only of a high quality but also its curation.  This is one art museum where one can see many beautiful things but also learn much about them, thanks to its informative panels, guided tours, etc.  A joy of a place to visit for an art lover, the pleasure is more than doubled when one's also a fan of museums in general!

Best Museum Garden: On a visit to Fukuoka back in 2006, I was introduced to the magnificent art of Yokoyama Taikan.  This past May, I visited a museum located on the outskirts of  a small city in Shimane Prefecture which is reckoned to have the largest -- and probably best -- collection of the master artist's works.  As amazing as it may seem, I may have been more blown away by the Adachi Museum of Art's garden; a picture of which in the first Japan travel guidebook I bought  had enticed me for years.  So incredible is it that I actually don't mind (too much!) the garden being out of bounds to visitors.  Put another way: it's wonderful enough to be able to feast one's eyes on it; it really is that beautiful. :)
Posted by YTSL at 11:25 PM

I looked up that Sake and found this tasting report (http://www.urbansake.com/sake-blog/the-worlds-best-sake.html). It is really a very expensive one. The article mentioned it was listed as USD460 back in the 2006. On the other hand the "Myouka Rangyoku" is an aged Dai Ginjo.

You were really lucky to have it.

Yes, I was very lucky indeed to get to drink that sake -- and for free too. It's like that writer said: it's an aged sake, yet light colored and considerably lighter tasting than one would expect an aged sake to be! :)