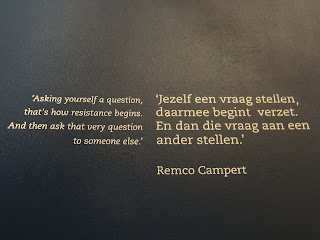 Words to live by at the Dutch Resistance Museum 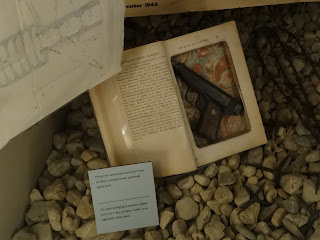 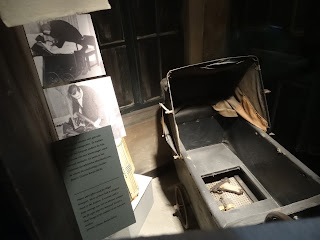 Given Amsterdam's reputation as a hedonistic city where recreational drugs can be easily procured and prostitution is legal, I can understand why people tend to react with disbelief when I tell them that the city's main attractions for me were its museums.  But that really was the case -- and thus it was that on my first full day in Amsterdam, I actually went and visited not just one but two of its more than 40 museological establishments!


Some folks may find it strange that I chose the Verzetsmuseum (AKA the Dutch Resistance Museum) to be the first museum I visited in the Netherlands but I thought it'd be a good place to go get contexualizing information prior to visiting the much more well known Anne Frank House (which my German friend and I had prebooked visits to for the day after).  And so it proved, with the Verzetsmuseum offering up a plethora of stories and facts about life in the Netherlands under Nazi occupation from May 1940 to May 1945.


Although its name might get one suspecting that it's going to be full of propaganda and tales of Dutch heroics, the Dutch Resistance Museum actually goes all out to give a more balanced picture of events -- and is all the better for this being so.  From the outset, it makes clear that after they found themselves under Nazi rule, people had the options of adapting or collaborating as well as resisting -- and that, in fact, resistance was actually the least popular option for many for the most part; with reasons being given for this ranging from it being by far the most difficult and dangerous option to many of the Nazis' directives and drives (such as the issuing of identity cards), at least initially, having appeared to be rather innocuous rather than obviously evil and wrong.


Something else that I greatly appreciate about this history museum was how it strives to put its visitors into the shoes of the people who lived under Nazi rule more than 70 years ago now.  One way it achieves this is by posing questions which come across as relevant today.  Another way it does so is to show how various individuals came to make the decisions they did (to adapt, collaborate or resist) using a combination of rational thought and emotion while thinking about themselves and/or others.


At the same time, even while making it understandable why some people opted to not actively resist against and oppose the Nazis, the museum's curators also have shown the societal results of people not having done so as much and earlier than would have been ideal.  The sending of some 140,000  Jews living in the Netherlands to concentration camps and their deaths, the sending of around 20,000 (other) Dutch nationals to labor camps in Germany, and the execution of some 2,000 members of the Dutch resistance are among the horrific statistics of the Second World War.

Still, what truly elevated the Dutch Resistance Museum for me is that its coverage actually extends beyond the Netherlands during World War II to also include the Dutch colonies -- and, in the case of what was known as the Dutch East Indies and now is Indonesia, through to 1949.  More specifically, as a special exhibition (which runs through to April 3rd) shows, after experiencing what it was like to be under foreign rule, the Dutch got to realizing that they were viewed as foreign oppressors by some people -- and that their own nationals were capable of atrocities and war crimes too.

Hailing as I do from neighboring Malaysia and having had more than one anthropology professor whose specialist area was in Indonesia, I had been acquainted with the dark side of Dutch colonialism before my visit to this museum.  But while I was not surprised to learn that Dutch colonialism was problematic, I did find it refreshing to see a Dutch museum openly acknowledge this and, along the way, deliver the universalist message that often we are all too fallibly human even when we'd prefer to be looked up to as righteous heroes, but that wrongs can be made right if we actively work to make it so.
Posted by YTSL at 11:59 PM

One of my favourite books 'Between Silk & Cyanide - a codemaker's story 1941-1945' by Leo Marks also have a few chapters talking about the Dutch Resistance. If you have not heard of this book, the public libraries have a few copies available (https://webcat.hkpl.gov.hk/lib/item?id=chamo:3016333&theme=WEB). Maybe it's just be, but I found this book a page turner.

I hadn't heard before of either "Between Silk & Cyanide" or "Peeping Tom" but you've made me curious about both of them now. Thanks!

A bit more information for a fellow film buff:

1. There is a special version of the 'Peeping Tom' DVD with an interview with Leo Marks. I had been looking for it but is unsuccessful so far;
2. There is an Associate Press article on the Net (http://www.powell-pressburger.org/Reviews/Leo/Leo.html) of an Interview of Marks a few years before he died;
3. Directer Martin Scorsese was so impressed with 'Peeping Tom' that he enlisted Marks to be the voice actor of the Devil in his movie 'Last Temptation of The Christ' (http://www.imdb.com/title/tt0095497/?ref_=nv_sr_1) in 1988;

Wow, you appear to know quite a bit about this subject! Sounds like "Peeping Tom" is a favorite film of yours! :O

I have not even watched 'Peeping Tom' yet. What I quoted came from IMDB and Wiki while reading 'Between Silk & Cyanide'. I am still trying to find the special version of DVD with Marks' interview as bonus material but it seem nobody is carrying it in Hong Kong. Would go to Broadway Movie Centre next time and see if their shop has it.

Good luck finding a DVD of the movie. The Kubrick store at the Broadway Cinematheque has a more limited selection than before, I fear. The last time I was there, I was told that the DVDs I was hoping to find there, including Ann Hui's "The Way We Are", are now out of stock! :(

If local store could not help I might have to go online for that. I have seen a Bluray version of Peeping Tom floating around, but that does not have the bonus interview. Or I would have bought it and think about getting a bluray player later.

I had also been trying to find this locally for quite a while (http://www.imdb.com/title/tt0088083/) but nobody seemed to be interested in old Polish movies these days.....

I first watched Seksmisja back in the mid 1980's during one of the then local Film Festivals. Anyway......

Good luck getting the DVD online. I've actually not ordered much online since I moved to Hong Kong. FYI, HMV seems willing to order DVDs for you if you're willing to prepay for them.