Walking from Tsuen Wan to Sham Tseng on an unusually cold day in Hong Kong! 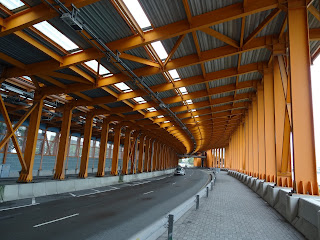 Is that a noise barrier in the above photo? 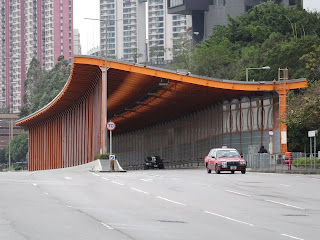 Whatever they are, these predominantly orange-colored
structures sure are eye-catching! 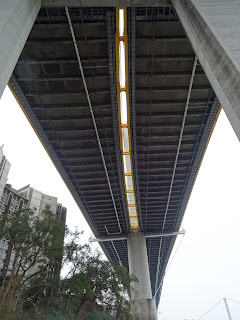 So too is the Ting Kau Bridge, whether viewed from
a vehicle passing along it or from down below! ;b


One summer afternoon some years back, I went and visited the Airport Core Programme Exhibition Centre at Ting Kau.  Because it was a pretty pleasant day, I decided to walk along the nearby roadside and do such as check out a few of the nearby beaches, including Lido Beach, from where one can get stunning views of the Ting Kau Bridge and Tsing Ma Bridge.


While strolling along what various signs got me realizing was a portion of the waterfront walkway between Tsuen Wan and Sham Tseng, I told myself that I'd return to walk the whole route on a cooler day.  Well, it finally happened today -- and it definitely was a cooler day.  Still, I have to admit that I never thought that it would be so much colder -- as in this turning out to be a day where certain parts of Hong Kong had subzero temperatures and frost, and temperatures were in the low single digits at sea level!


Although the Hong Kong Observatory had issued warnings earlier this week that this weekend would be on the cold side, I don't think even its weather forecasters realized that the chill would be record-breaking: i.e., today's temperatures are the coldest recorded in Hong Kong in close to 60 years!  Many "frost tourists" who had gone up to places like Tai Mo Shan, Hong Kong's highest mountain, were most definitely caught unawares by the icy conditions to be found on higher ground -- and needed to be rescued by firefighters from the cold (and, it would seem, their own stupidity).


Another way of getting a good gauge as to how cold it was -- and felt, with strong winds blowing and such -- today was that all my regular hiking buddies bailed on me!  Wanting to spend some time outdoors this Sunday rather than just freeze in my flat (with its thin, non-insulated walls, etc.), I ended up joining a meetup group for an afternoon stroll from Tsuen Wan to Sham Tseng, where we'd  visit the Garden bakery's plant (within which can be found a nice cafeteria and exhibit area as well as a store where one could buy its products).


Although the afternoon was predicted to be dry, it drizzled down for a good portion our walk.  In all honesty though, none of our party of eight appeared to mind too much about this.  Instead, we enjoyed the brisk air, cool sights (which, for me, at least, included views of noise barriers and bridges from angles that I don't normally get to see these structures) and fun conversations we engaged in as we strolled along the scenic waterfront walkway.

And for the record: I don't think I felt warmer at any point today then when we were in the Garden bakery cafeteria partaking of hot drinks and such as (in my case) a Cornish pasty which, given that it was made as well as consumed several thousands of kilometers and miles away from Cornwall, actually was not bad at all! ;b
Posted by YTSL at 11:26 PM

It doesn't look cold. I guess when I see snow I think of cold.
Coffee is on

When you bear in mind that Hong Kong has a sub-tropical climate, a day where frost and ice could be found in parts of the territory is incredibly cold indeed. By the way, yesterday (and today), Hong Kong's colder too than Amsterdam and London! :O