An enjoyable -- as well as non-touristy -- Peak area excursion 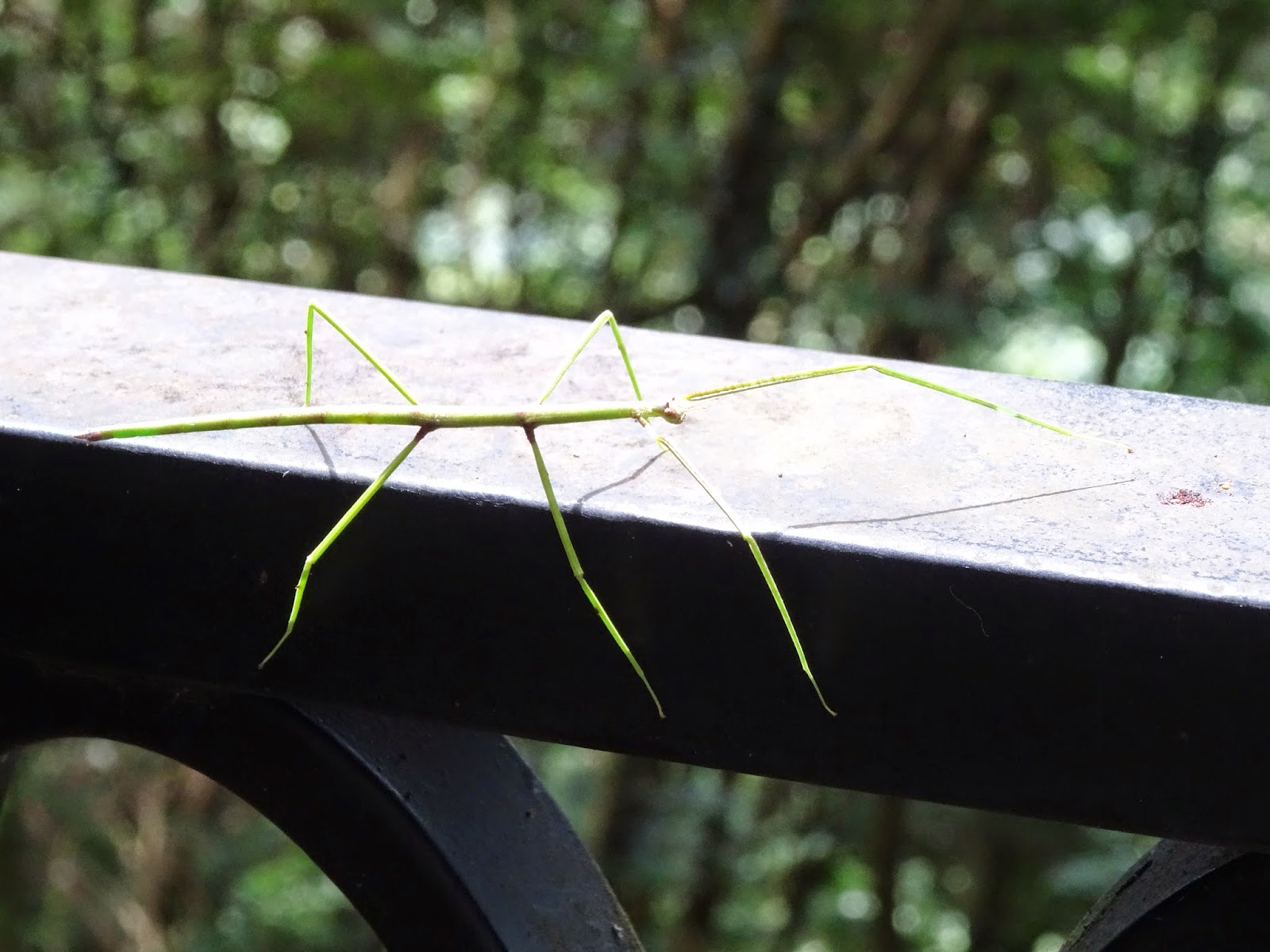 A green stick insect sure sticks out when atop a black railing! 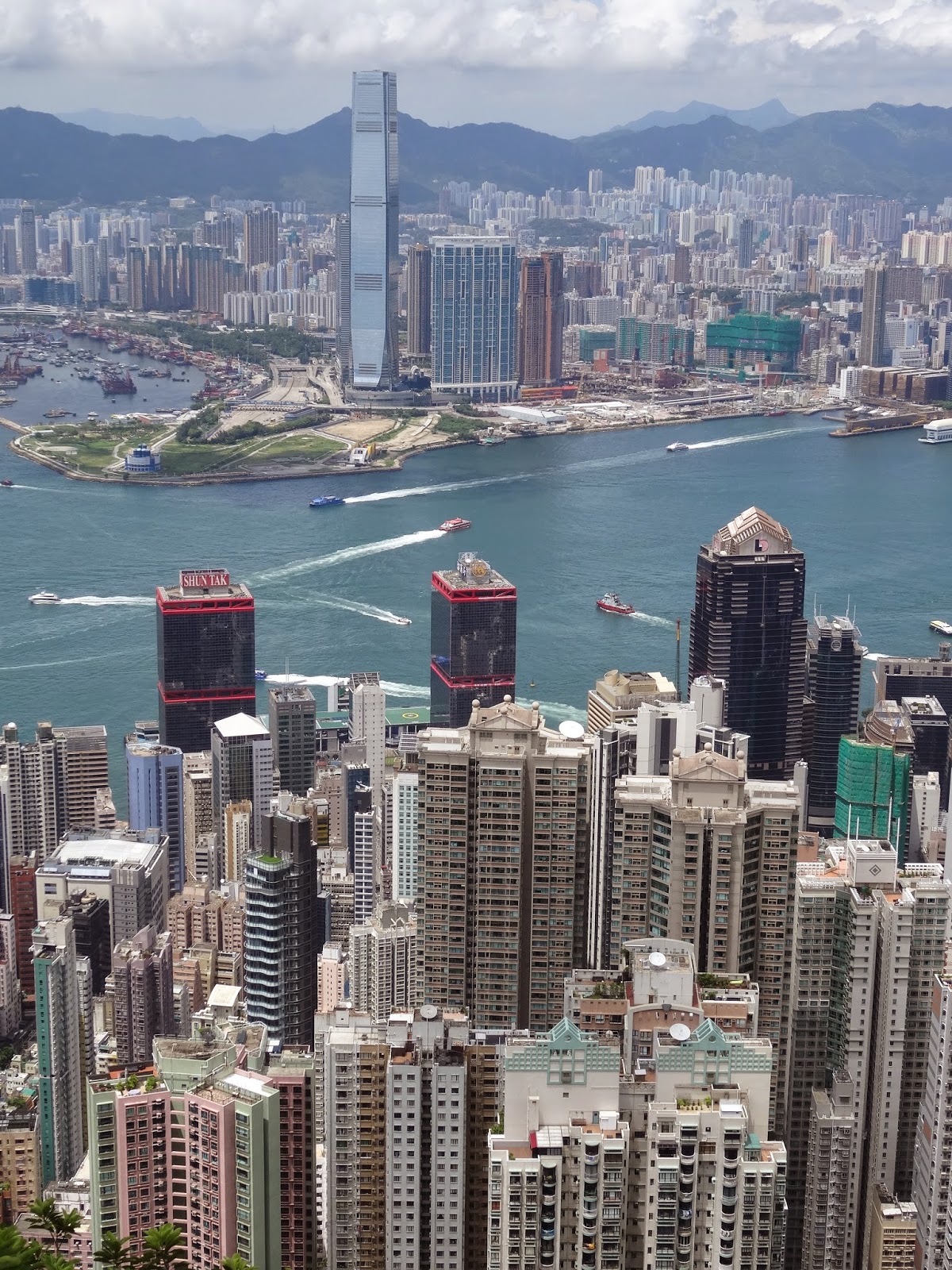 But for truly wonderful views, head up to High West!
(click on the photo to view an enlarged version :b)

To many Hong Kong residents, the Peak is where rich people live and foreign tourists visit, and a place they'll head up to themselves only when they have friends visiting from abroad.  In addition, many people -- local and foreign -- who head up to the Peak end up only visiting the section around the Peak Tower and Peak Galleria, unaware that that's not truly Victoria Peak but, instead, just Victoria Gap, some 150 meters below the top of Hong Kong Island's highest hill (but which still is only the 31st highest peak in the whole of Hong Kong!).
Because I know that the Peak is so much more than is popularly believed, I like hiking in the area -- and it's one of those places I make a point to visit in the hot summer months, not least because it is noticeably cooler up there than the lower lying sections of the Big Lychee.  Granted that the Peak Circuit Trail is so easy that going along it doesn't constitute a proper hike to hardcore hikers but it cannot be denied that the first few kilometers of the Hong Kong Trail does go along it.  And even better is how it leads and connects to a number of other interesting hiking trails in the area.
My favorite of these is undoubtedly the short but steep trail from the western end of the Peak Circuit that leads up to the top of neighboring High West.  When that's followed by a trek down to Aberdeen, with or without taking in the section of Hong Kong Trail that passes by Pok Fu Lam Reservoir, that can be quite a challenging hike on a hot and humid summer afternoon!
This afternoon, my hiking friend and I decided to give Aberdeen a miss after our High West excursion.  Instead, we went on a section of trail I had previously never been on -- one a bit more rugged than the more usual paved trails found in the area, that conveniently ended at a bus terminus on Pokfield Road up in what's often called the "western Mid-Levels" above Kennedy Town.

While visibility was not as superb as when I went up to the top of High West last year, it still was a darn sight better than the time I visited and got somewhat freaked out by how super misty it got up there.  So I really enjoyed the views -- and the splendid peace and quiet -- to be had up on that 494 meter high hill that is one of my favorite Hong Kong peaks once again.
And while the summit of High West was the highpoint -- literally and otherwise -- of this afternoon's hike, the rest of the excursion was pretty enjoyable too.  It's hard, really, to get blasé at the scenic views of Hong Kong that gets offered up along the northern section of the Peak Circuit Trail.  And when there also are a few critter spottings while strolling along there, I can't but end up feeling that it was yet another good -- and hardly typically touristy -- afternoon out up on the Peak! :)
Posted by YTSL at 8:10 PM

A photo-essay that vividly puts the reader right into your footsteps. Wow! That bottom photo is a stunner. Reminds me of a panoramic travelogue image from the old widescreen film format, Cinerama!

Glad you gave Ponyo on the Cliff by the Sea a 9.5 in your most recently viewed movies. Disney distributes Studio Gibli in North America, and thankfully they also put the Japanese language version on the disc. I also treasure my copies of Totoro and the great -Spirited Away.

I'm glad you liked that panoramic photo. I'm going to see about taking more of that kind in the future. :)

Re "Ponyo on the Cliff by the Sea": this Saturday was my second viewing of the film on a big screen. It really is lovely when viewed that way -- and yes, in its original Japanese. I heard the English dubbed trailer and that was already too much for me! ;(