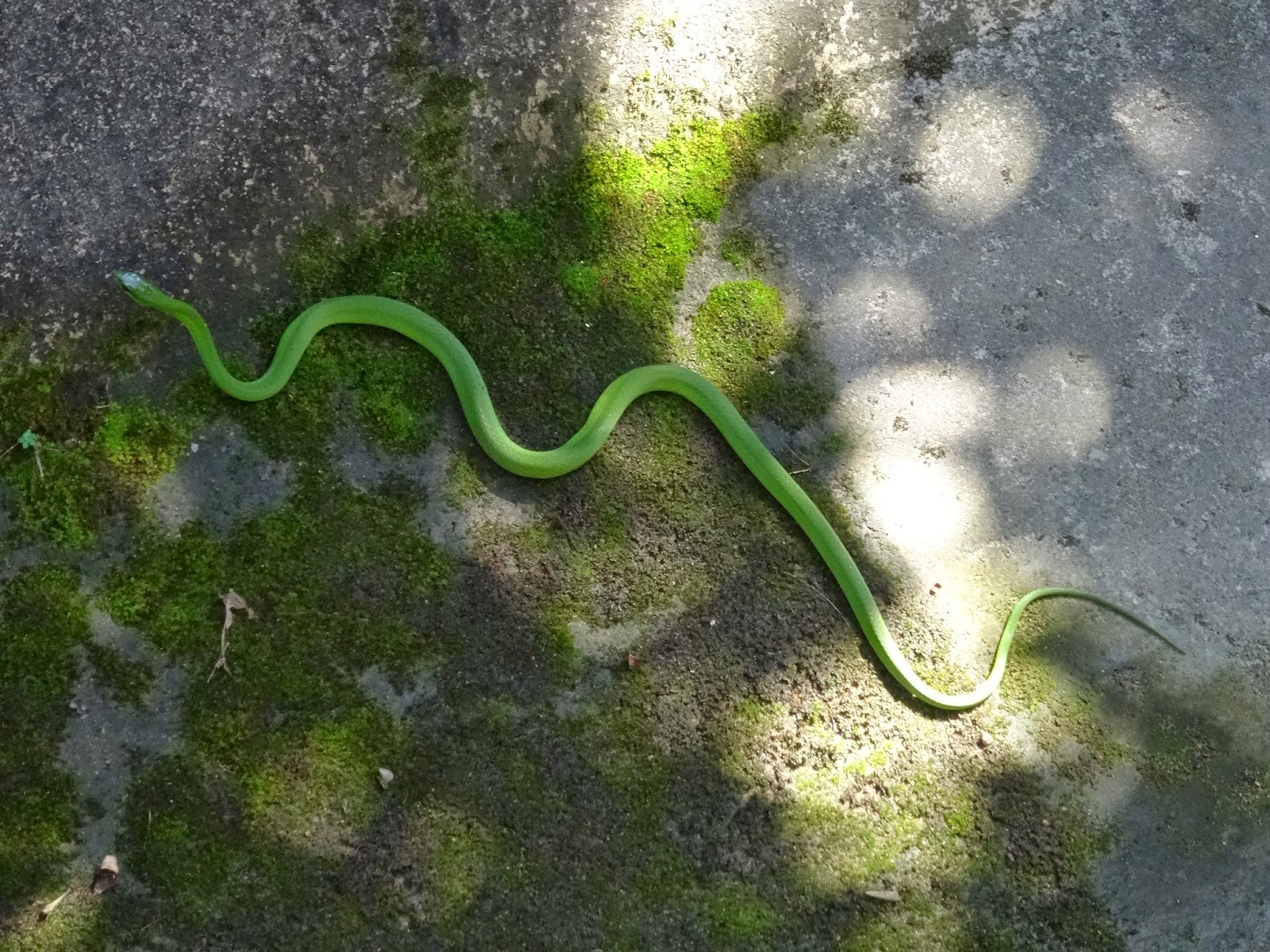 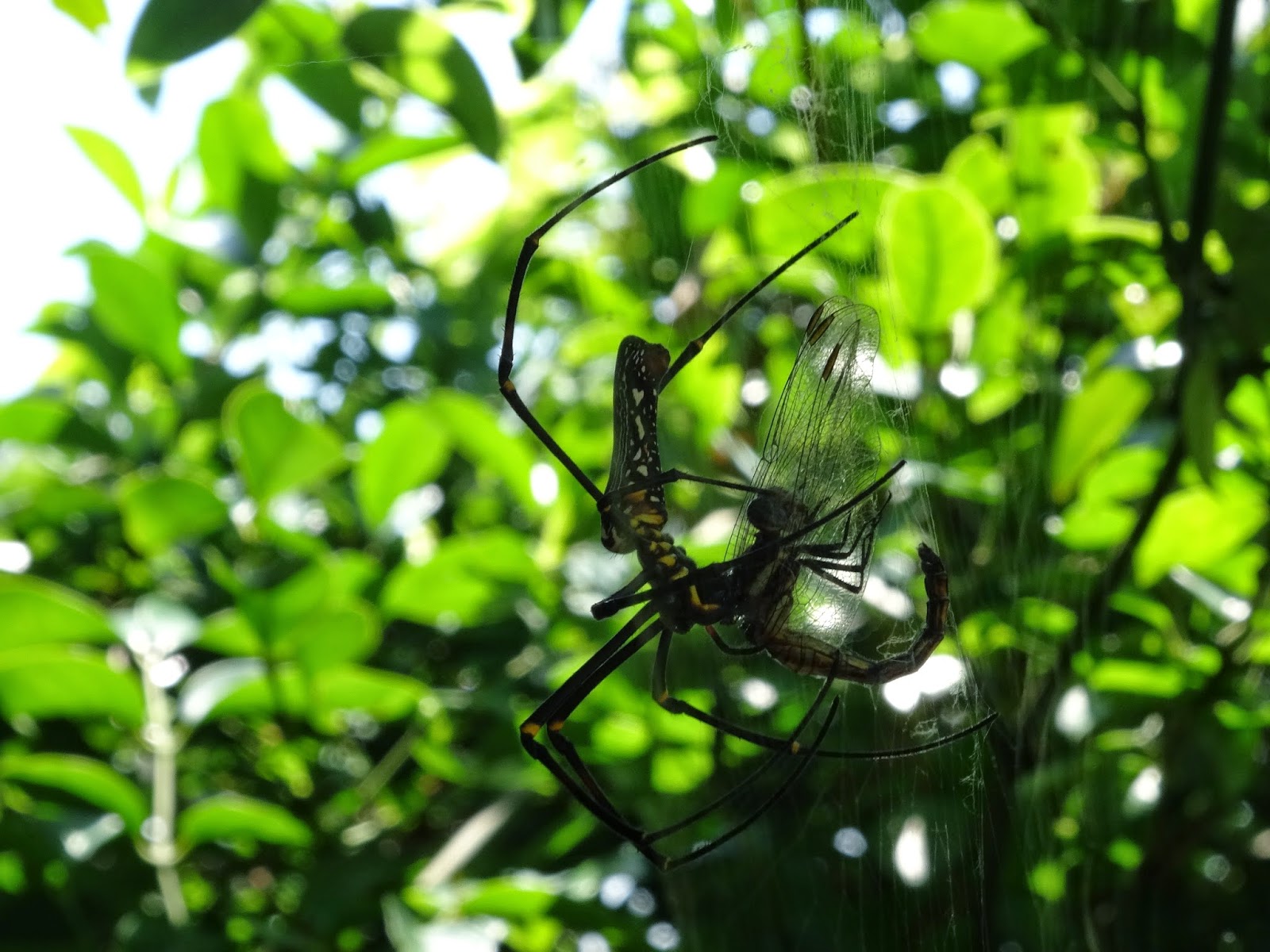 A Golden Orb Weaver spider and its poor dragonfly prey 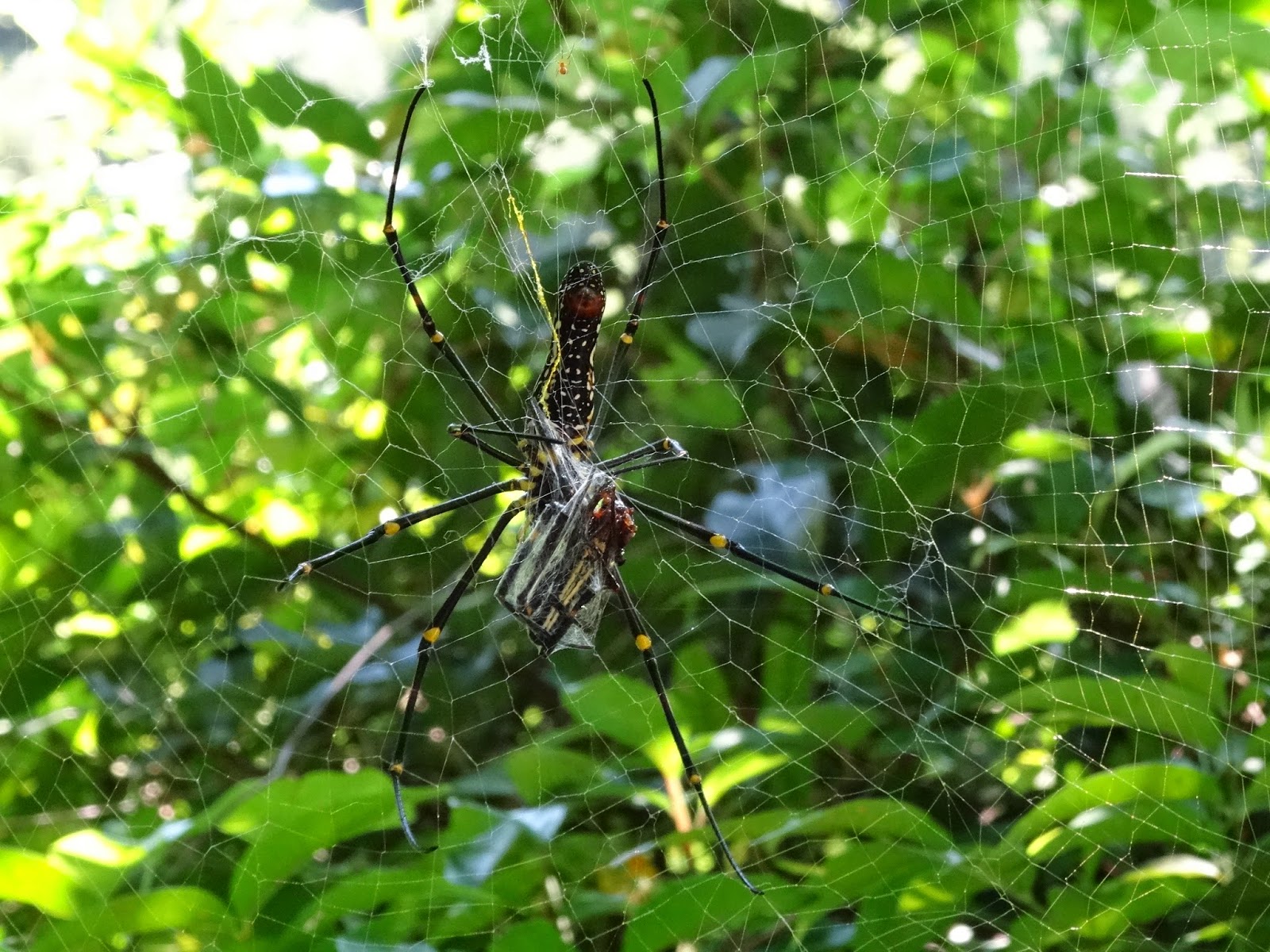 Spider cannibalism -- another Golden Orb Weaver
opted for a fellow spider to be its food! :O

Earlier today, I went on a hike with with three friends that took us from Wong Nai Chung up to Violet Hill's two highest peaks, then down to Tsin Shui Wan Au to connect with the portion of the Tsz Lo Lan Shan Path that led around the Twins down towards Stanley.


While hiking along Violet Hill, I mentioned to one of my friends that this particularly excursion had been rather thin on the ground in terms of critter spottings.  Little did we know then the veritable critter spotting explosion we'd experience in the latter section of the hike, pretty much once we passed Tsin Shui Wan Au!


On most other days, spotting a green snake -- regardless of whether it was a Greater Green Snake (as I'm inclined to think based on descriptions of its behavior), considerably more venomous Bamboo Snake (based on how it looked to me) or something else altogether -- would normally constitute the high point of the critter spotting portion of the hike for me.


But whereas we saw one live snake on our hike this afternoon (along with a partially decaying dead one that was giving off a distinctly strong smell), we must have seen as many as 50 spiders -- the vast majority of them Golden Orb Weavers -- over the course of less than two hours!  And adding to the experience was many of them having built their webs so close to the path that the tallest among us (who's around 6 feet 4 inches tall) had to hunch to avoid a number of them while another of our number ended up accidentally getting a large section of spiderweb stuck on her backpack courtesy of having veered a little too close to the path's edge at one point!

In addition, it was interesting to notice that a surprisingly high number of the spiders had caught themselves something to eat in their admittedly often pretty large webs.  On a Lantau Island hike a few years back, I had seen a Golden Orb Weaver with the remnants of a butterfly in its web. Today, I saw Golden Orb Weavers which had caught bees, dragonflies -- and most shockingly of all -- another Golden Orb Weaver in their webs and definitely looked like they were preparing these other creatures to be eaten!

Despite their venom being potent (but not lethal to humans) and their being capable of biting people, I have to admit to generally enjoying the presence of Golden Orb Weavers rather than being freaked out by them.  For one thing, I tell myself that they help keep the mosquito population down.  For another, I find them very beautiful and easy photography subjects (since they don't run away when I try to take snaps of them).

But I have to admit that I'll never quite look at them in the same light again after seeing today that they're capable of cannibalism!  Indeed, I might go so far as to say that I found the sight of the Golden Orb Weaver with another -- and definitely dead -- Golden Orb Weaver in its web to be creepier than that of the green snake spotted today; though it's true enough that if that snake hadn't decided to stay on the far side of the catchwater from us, that might have been an entirely different matter! ;b
Posted by YTSL at 8:47 PM

So... does this mean you'll never go hiking with me again? ;b

These photos are worthy of inclusion in your archive of insects and reptiles of Hong Kong. The green snake looks less frightening than the spiders. And yes, for true HK film fans, the snake might summon images of Hark's The Green Snake.

Two films I saw this week...Ronny Yu's Saving General Yang. If the screenwriter and director had given more background to the characters, the movie would have had a greater emotional impact. Still, the battles were well staged and it was worth seeing...I would like to recommend Locke (England, 2014), a film that has only one character, who drives at night to London, spending the entire time talking on the phone. And the film manages to tell a good story. If this makes it to HK, worth seeing.

Recently, a Japanese friend told me that in his culture, spotting a snake is considered good luck. I have to admit that I don't tend to think I'm blessed when I catch sight of a snake -- but it's also true enough that I often get a thrill out of spotting a snake while out on a hike, once I stop getting scared out of my wits by them, that is!

Re Ronny Yu's "Saving General Yang": I think the thing with that film is that there's an assumption that the vast majority of the people who'll see it already are very familiar with the story of that particular Yang family. And for my part, I was quite impressed by the movie -- and it did help to have viewed the film with a thoroughly receptive audience.

Re "Locke": Thanks for the recommendation. It'll be interesting to see if it makes it out to Hong Kong...

A further comment about Saving General Yang. I watched it a second time, and as often happens with me, I liked it better. I then watched my copies of Eight Diagram Pole Fighter and 14 Amazons. I guess Hong Kong film fans should be thankful for something like General Yang which does recall the heroic themes of past films, especially Shaw Brothers films.

It's cool that you gave "Saving General Yang" a second chance -- and great that you liked it more the second time around!

It's actually a pretty rare event these days for me to re-watch a film. Too many movies, too little time, etc.! ;D