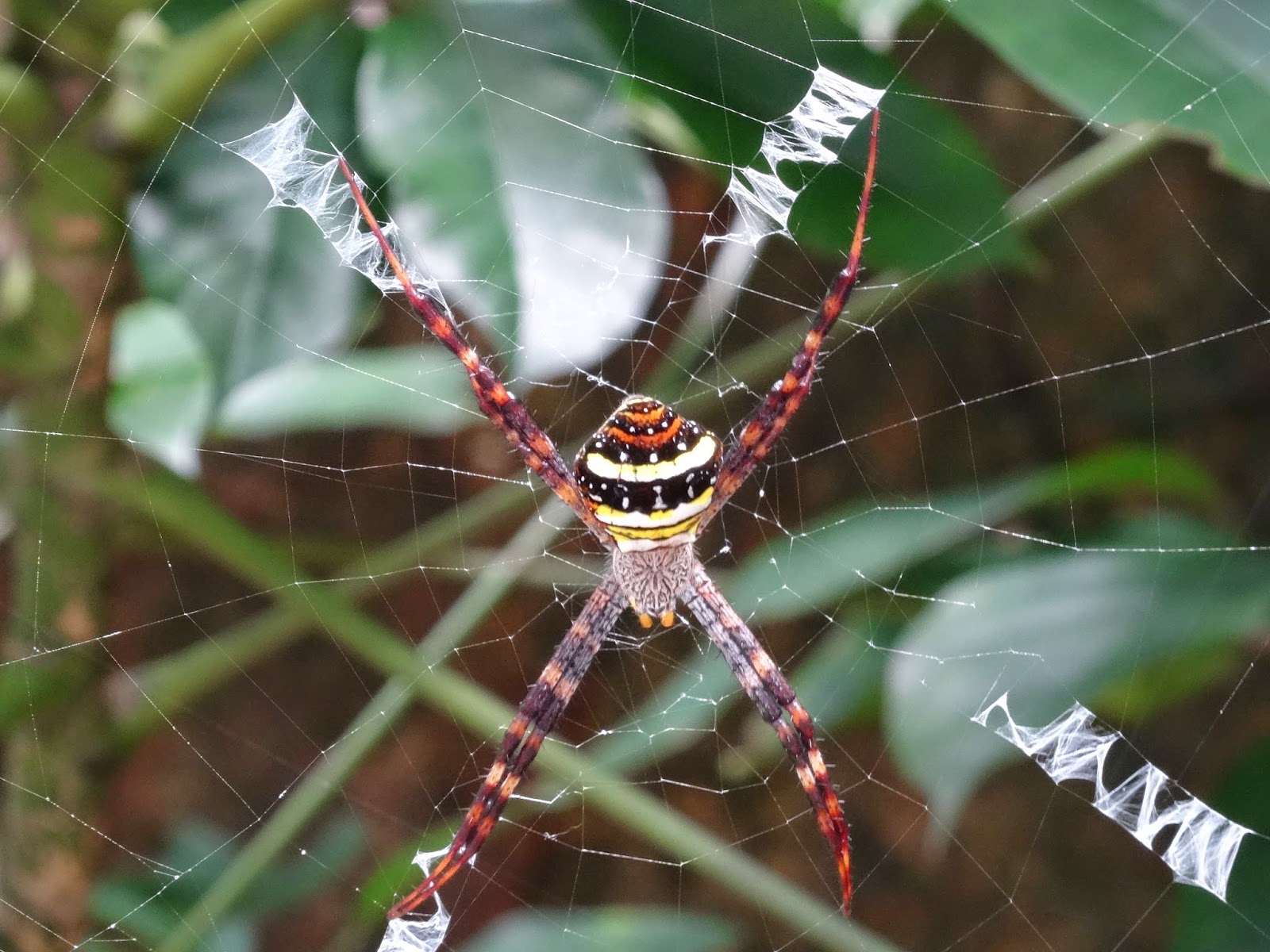 Arachnophobes, look away -- but to others,
isn't this spider a beauty as well as unusual looking?! 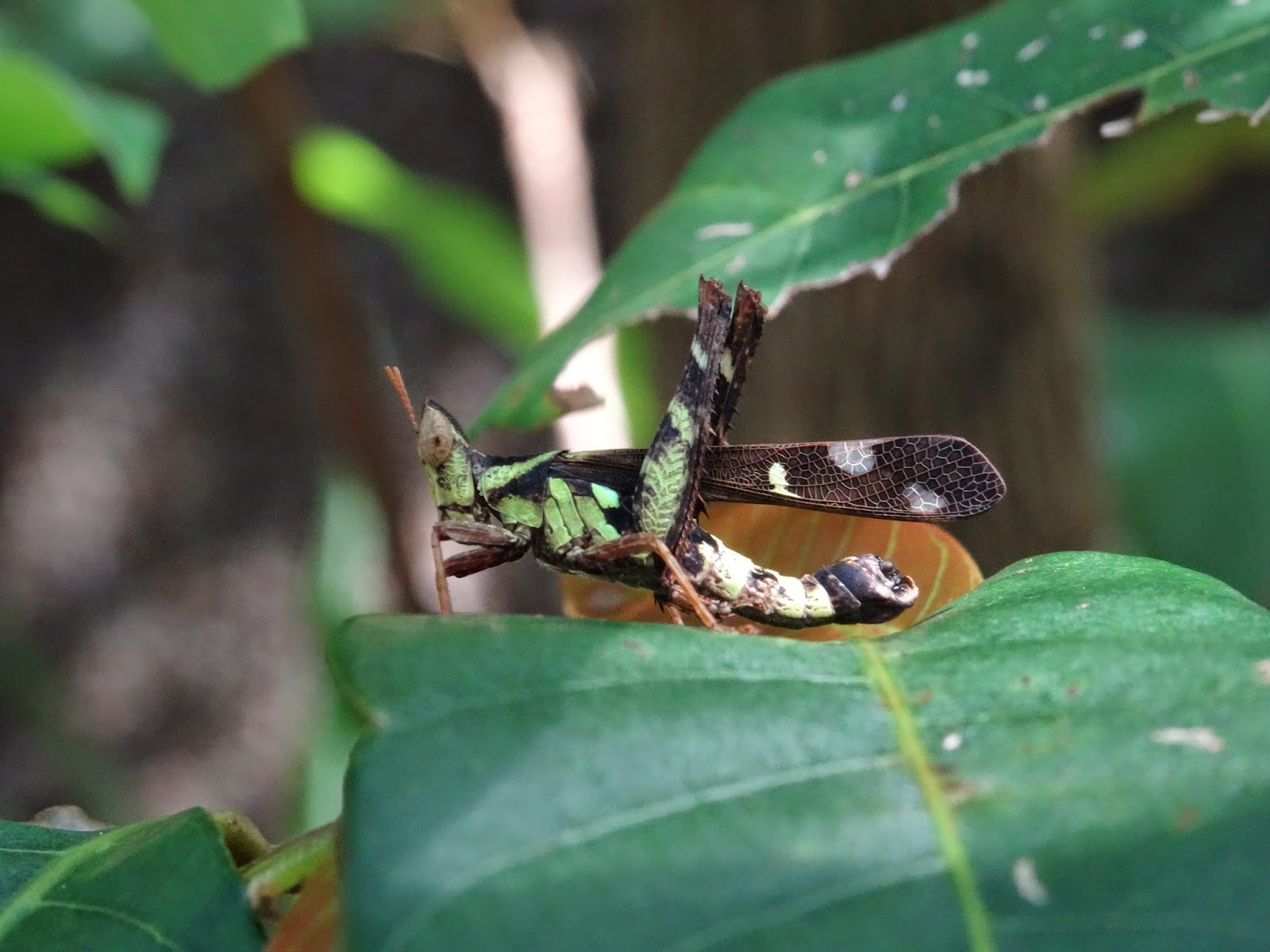 Is that a grasshopper or cricket -- or something else
altogether (e.g., an alien creature) -- in the photo? :O 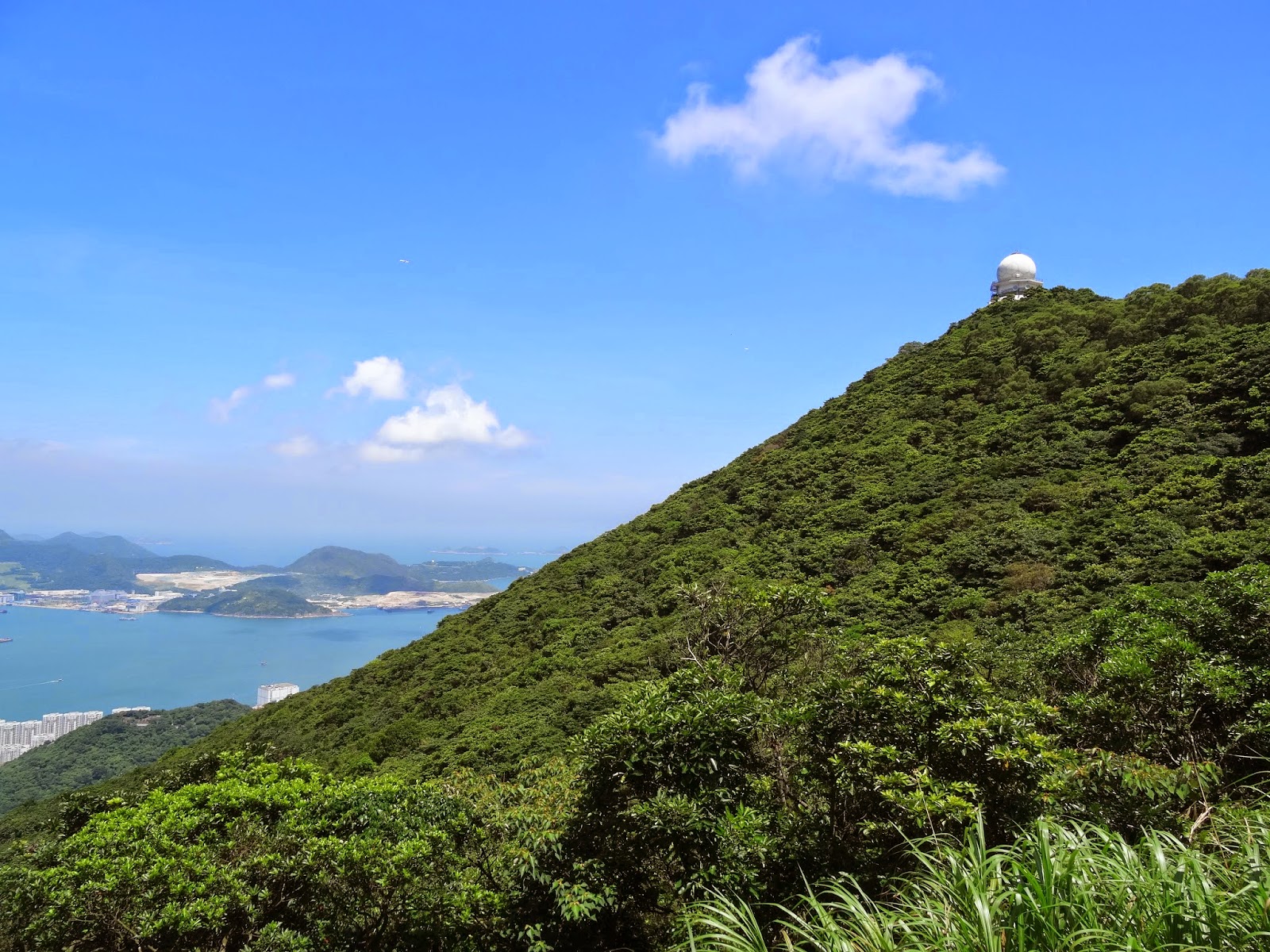 The plan for this hot summer afternoon was to go on a short hike -- one that would take a friend visiting from Singapore and I partially up Mount Parker Road and then along the Hong Pak Country Trail that goes around the valley at the northwestern slope of Mount Parker.  But as we ascended the lower section of Mount Parker Road, the wireless signal station atop the 532-meter-high hill looked so inviting that I couldn't resist the siren call -- and fortunately was able to persuade my friend that it'd be cool to head up there instead.
One of the attractions today of heading up to that high ground was that the high visibility conditions would mean that we'd be able to see far from up there -- and so it proved, with our being able to see many kilometers further into the distance this afternoon when I previously visited (with a different friend), on a cloudy day.  It's not often that one can see Ma On Shan, the Ninepins and the islands south of Po Toi that belong to China from Hong Kong Island -- but such was the case this afternoon from atop Mount Parker!

I have to be honest though and say that what I liked even more about the section of today's hike that saw us go beyond Quarry Gap (aka Tai Fung Au) was how much more bereft of other people -- and therefore more peaceful and idylic -- the upper section of the trail was.  And I don't think it coincidental that we made way more critter spottings on the section of trail between Quarry Gap and the top of Mount Parker than the lower section of Mount Parker Road that led us from sea level (or thereabouts) King's Road up to Quarry Gap.
Among the cool critter spottings made this afternoon were of four different blue-tailed skinks -- two adults and two babies, all wandering about separately.  Then there was the beautiful gold-colored dragonfly that obligingly perched for several minutes for us to take its photo!
Rather than put their photos on this blog entry though, I've opted instead to showcase a couple of critters that I had never seen before -- or, rather, with the particular coloring and patterning that I saw this afternoon.  The first of these I am pretty certain is a type of spider.  However, I'm not sure whether the other is a cricket, grasshopper or something else altogether -- and in both cases, I reckon they'd be the kind of creatures that could well serve as pretty good inspirations for film aliens! ;b
Posted by YTSL at 11:20 PM

That spider is colourful. But it also looks mean.

Since I can't see its face, I can't judge its expression! For my part, I reckon that the spider looks like it's wearing a woolly knit cap -- and somehow I feel that it'd not be all that great to touch!