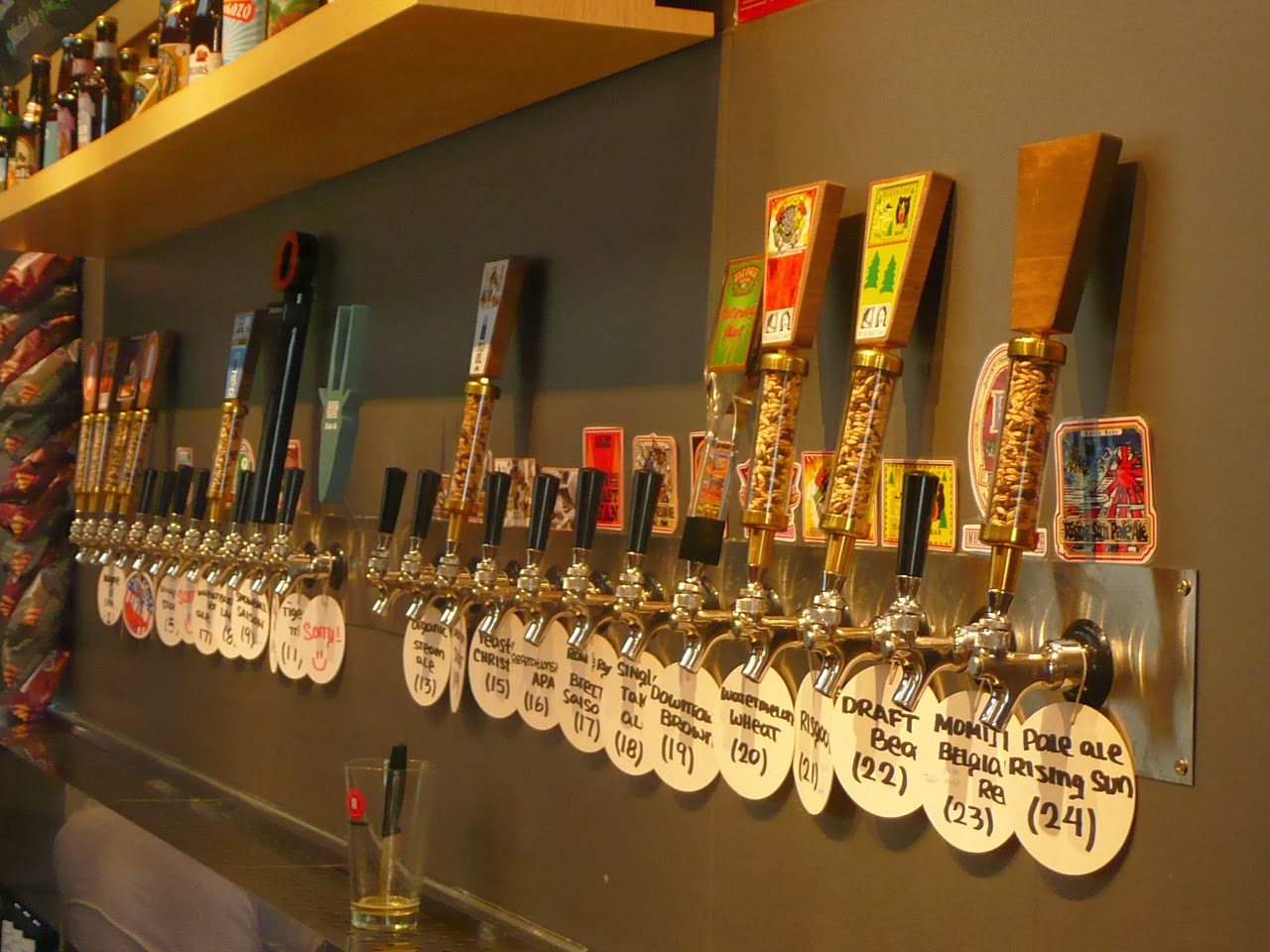 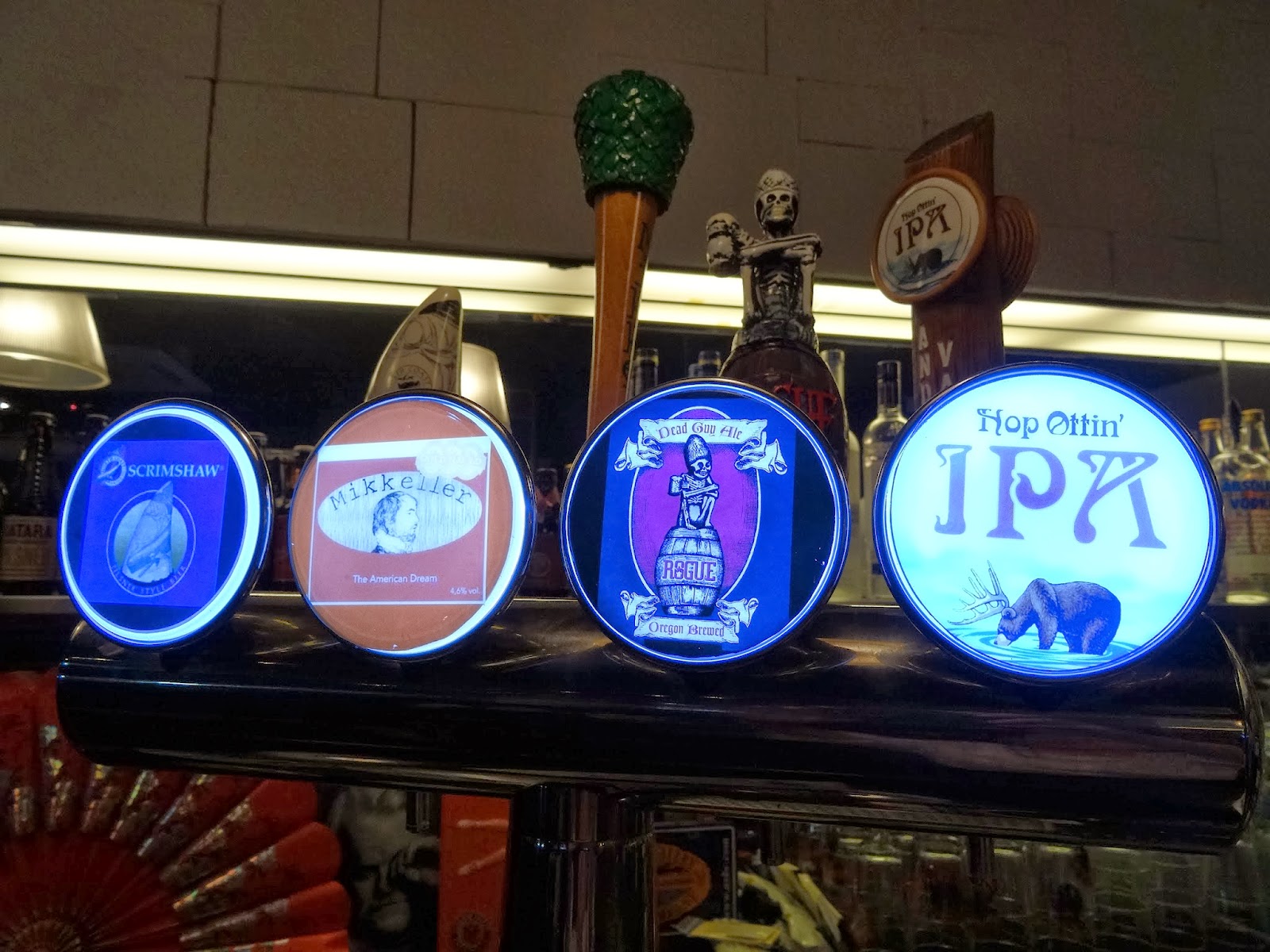 There may be only four taps at Stone's but
they're always only for microbrews! 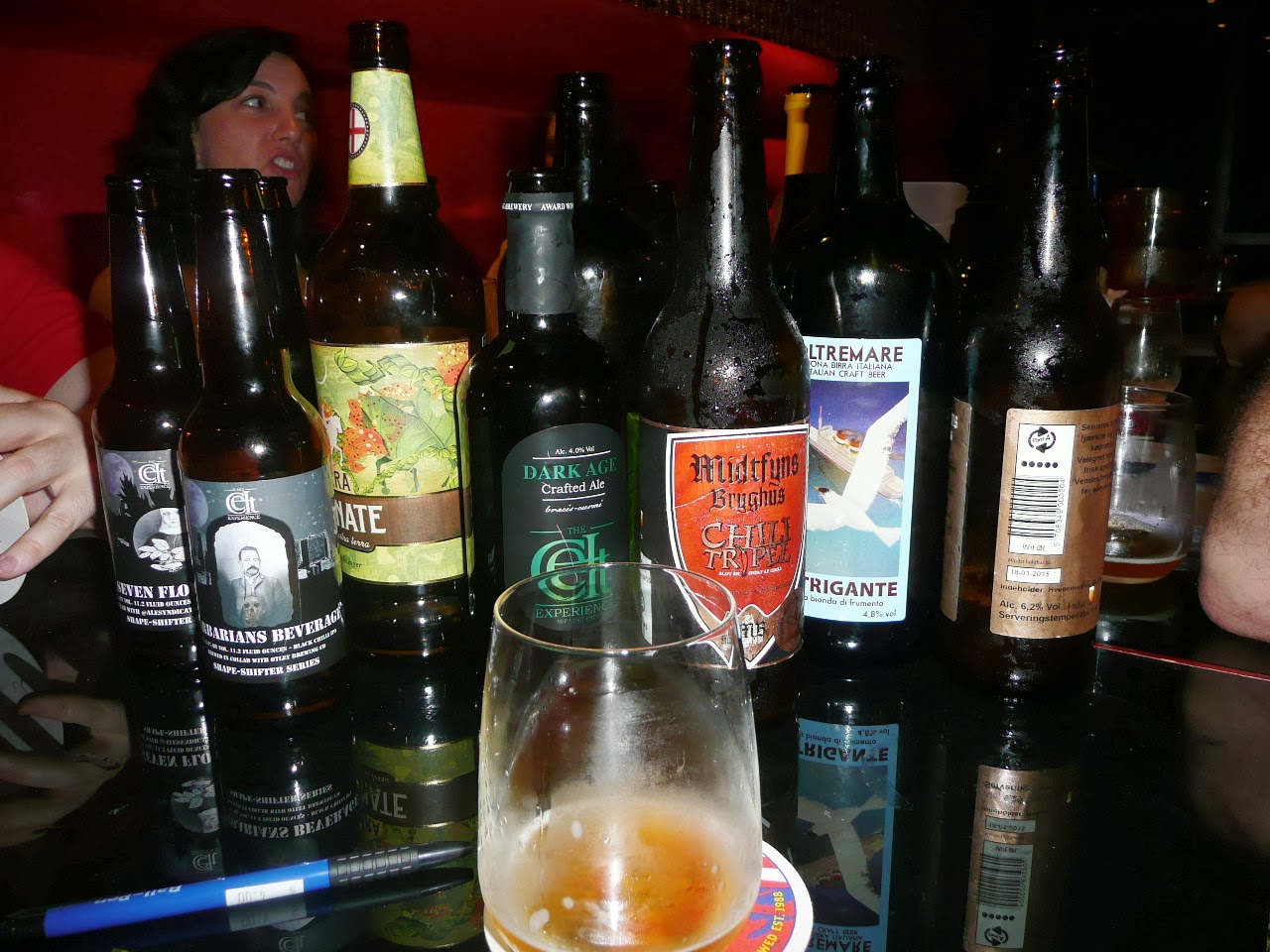 On my first visit to Stone's, I got invited to take part in
a mega beer tasting session! :O

It all started with my finding the Nogne O Imperial Stout available on tap at the Excelsior's Dickens Bar last November.  Until then, I had assumed that I wouldn't get to taste an imperial stout on draft unless I flew back to Britain (the home of the amazing Sam Smith Imperial Stout that I'm pretty partial to) or the USA (where I had imbibed the Victory Storm King Imperial Stout on draft and dreamnt of one day being able to drink the North Coast's Old Rasputin Imperial Stout on draft rather than just from a bottle).

And although I've since learnt that imperial stouts are indeed thin on the ground on Hong Kong due in part to local tastes not being partial to this particular category of beer, I also have more happily found out that the Big Lychee has developed a taste for microbrews (which tend to get referred to more as "craft beers" over here) -- and that several establishments and companies exist to cater to the territory's growing group of beer geeks.

One evening a few months ago, a friend invited me to go with her to The Roundhouse over in Soho for barbecue and beer.  If truth be told, she was more interested in the barbecue while I was more excited by the beer selection I found there!  For while I didn't see any imperial stouts on tap that evening, I did get to renew my acquaintance with some old American microbrew "friends", including those from the Anderson Valley Brewing Company whose beers I had enjoyed when I lived in Philadelphia so many years ago now.

Feeling emboldened by the experience, I decided to check out another establishment that only has microbrews on draft, and is located closer to my neighborhood. Thus it was that one Saturday afternoon, I walked into Stone's over in Tai Hang and up to the bar. As luck would have it, boss man Joel was manning the bar and after I told him that I really liked microbrew beers, he scored me an invite to a private beer tasting session going on in the bar's other room that was hosted by Hop Leaf's Jeff.

After tasting some 15 (maybe 20?) different beers and giving my input on them, I left Stone's... without having paid a single dime for anything!  Of course, I felt I had to go back again after that.  As it turns out, my second visit to that bar-restaurant was also pretty memorable because Joel got me drinking whiskey shots as well as microbrews -- and consequently way drunker than I would like, and have been for at least six years!

The next time I saw him, I told Joel very firmly that I would be sticking to drinking beer -- and this even though he offered to buy me whiskey shots at least three times that evening.  Sticking to that policy, I've subsequently had many enjoyable afternoons and evenings at Stone's -- with the latest being two nights ago when I found Anderson Valley's Hop Ottin' IPA newly on tap there.

Emboldened by these experiences, I've gone ahead and signed up for a session at Beertopia this year.  Scanning the event's impressive beer list, I've spotted a few favorites along with other microbrew beers I've heard of/read about but have yet to try.  In particular, I look forward to renewing my acquaintance with Cherry Hill, New Jersey's Flying Fish XPA and the tipples from Philadelphia's Yards Brewing Company.

Incidentally, although I've yet to find my microbrew holy grail (i.e., the North Coast Old Rasputin Imperial Stout on tap), I've found another imperial stout that's very much to my liking this winter -- and believe it or not, it's from a microbrewery (called Boxing Cat) that's located in... Shanghai! ;O
Posted by YTSL at 9:57 PM

HI YTSL -- Hope some bars are reading your blog post and getting ideas of which microbrews to stock up on!!!

That means I have to visit the Tap Room sometime.

I'd love it if some of those bars read my post -- actually, I'd love it for them to hear my please re the North Coast Rasputin Imperial Stout too!

You mean the Tap Room at the Roundhouse? For sure! ;b

Even though I'm not a big beer fan I found your post not only informative but interesting and fun too. Lucky you to have these places near you.

So what do you think or have you had a shot of soju poured in a glass then the beer....saw this done in a K-drama I'm watching. My uncle used to drink boilermakers but he always drank the shot first then the beer as a chaser.

Re soju boilermakers: yikes! Not for me, thanks. I think they'd be too deadly!! :D