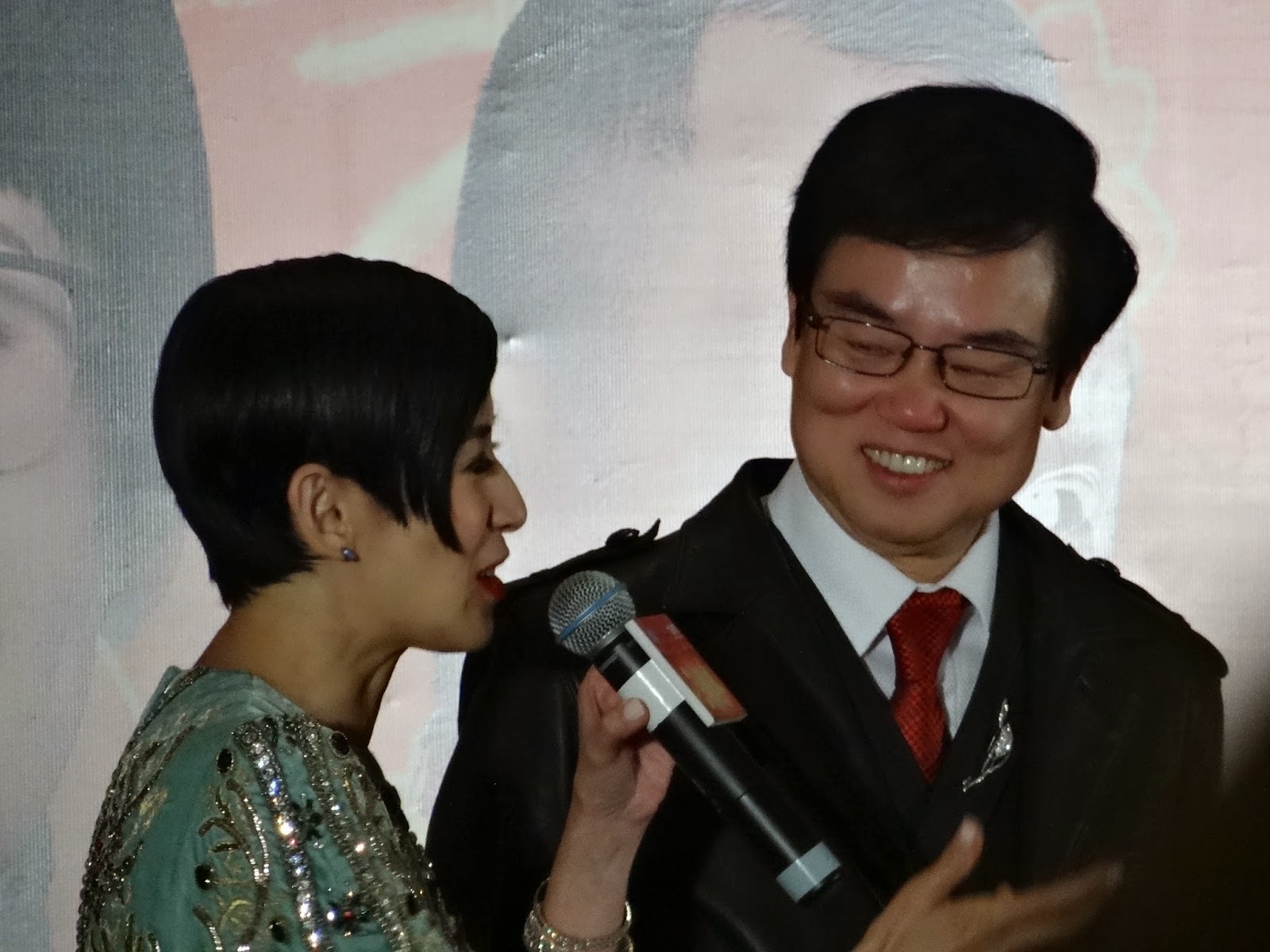 "Sorry Raymond, but the film I produced is better than
the baby you produced this year!" 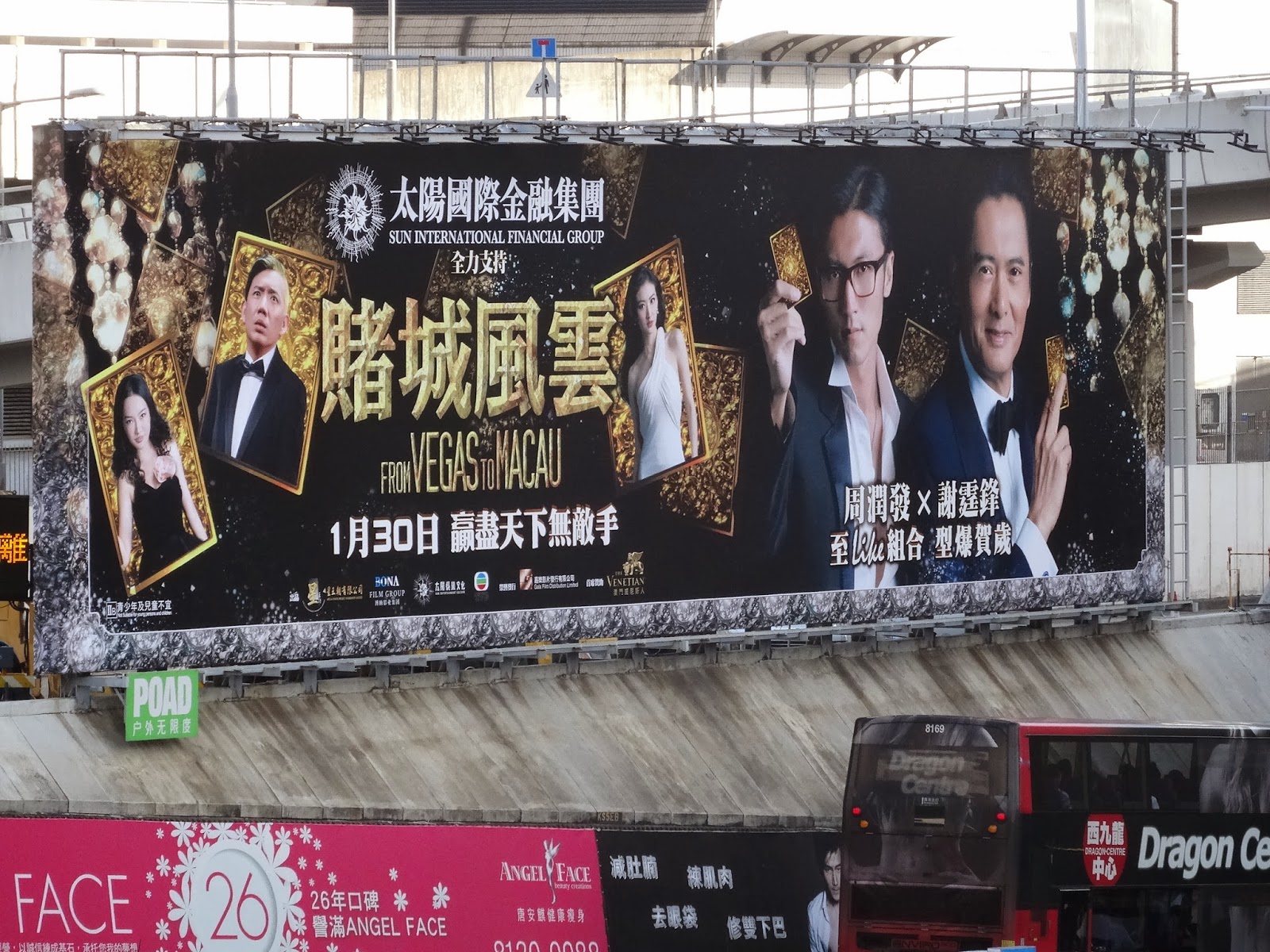 Golden Chickensss
Director: Matt Chow
Starring: Sandra Ng, Nick Cheung, Ivana Wong, Eason Chan, Wyman Wong, Ronald Cheng, Louis Koo, Tony Leung Ka Fai, etc., etc.!
In the first year after I moved to Hong Kong, I had the good fortune to interview filmmaker Peter Chan Ho Sun. Even more wonderfully for me, after the interview came to an end and I switched off the tape recorder, he carried on talking with me for a further one and a half hours about the movies he had directed and produced up until then (i.e., shortly before the release of The Warlords).

Among the things I remember him proudly telling me was how he had channeled the profits he made from making Pan-Asian films like Three into producing the very Hong Kong -- as well as much loved -- Golden Chicken. That 2002 dramedy starring Peter Chan's real-life partner, Sandra Ng, as a prostitute with a heart of gold known as Ah Kam spawned a sequel in 2003, but it's only in 2014 that the third Golden Chicken film has come into being.
More than a decade on, Ah Kam is no longer a prostitute but a mamasan -- and one who's expertly "books appointments" for her clients using mobile phone applications and skillfully provides a variety of services at that. And, as she proceeds to have to point out to ex-Triad boss Gordon Ko (Nick Cheung) upon his release from prison after serving a multi-year sentence, Hong Kong has changed a lot during that time too.
But while Golden Chickensss has Sandra Ng herself as the credited producer (rather than Peter Chan) and Matt Chow at the helm (rather than Samson Chiu, as was the case with the previous two installments), some things never change with regards to this particular franchise.  Among them are this latest film being cameo-filled like the two older Golden Chicken movies.  In addition, there's this production having both comic and dramatic moments, and its makers trying to generate laughs one minute, then patho the next, before thickly laying on a message that's suppose to be inspirational to Hong Kongers who may feel like the future's not looking so golden anymore.

Given the nature of the beast, there's no denying that Sandra Ng and her Ah Kam character are the heart of Golden Chickensss.  However, Nick Cheung is given a surprising amount of screen time, and the likes of singer-songwriter Ivana Wong (playing a prostitute who, like Ah Kam before her, is more hardworking and funny than beautiful or sexy in her feature film debut), Wyman Wong (as a Japanese man who's an oral sex expert!) and Ronald Cheng (as a top gigolo who'd do anything to make his clients happy) have scene-stealing roles that are more layered and multi-dimensional than one would expect.
After a startling start (with a silent scene set in the Stone Age which illustrates the food for sex theory being quickly followed by a highly amusing Tang Dynasty scene in which flowery language is shown to a discussion of different sexual service, including bargaining over their prices, before we get to the present day), Golden Chickensss runs along pretty well before sagging a bit during a middle section in which Sandra Ng cedes centre-stage to Nick Cheung.  Fortunately, however, the film soon gets back on track, ensuring that its viewers (including former Chinese New Year movie virgin, The Fragrant Harbour) will come away from checking it out feeling satisfied and in a good mood!
My rating for the film: 7.5

It's hard to find a Hong Kong movie fan who doesn't love Chow Yun Fat.  Rather, the dispute tends to be more along the lines of whether one likes the cool Chow Yun Fat (found in many a John Woo movie, like The Killer or Hard Boiled) more or the comedic Chow Yun Fat (who can be seen in movies like 100 Ways to Murder Your Wife, Diary of a Big Man, and Now You See Love... Now You Don't!)

As someone who is in the latter camp, I was really glad to see Chow Yun Fat's comic side coming to the fore in From Vegas to Macau, a gambling action comedy which sees Wong Jing and Chow Yun Fat renewing their commercially successful partnership once again.  The movie also nominally stars Nicholas Tse, perhaps the most heavyweight of the Hong Kong actors who now are in their 30s.  But in all truth, once the man from Lamma's character appears on the scene, there's no question who this film's one true luminary is.

Bespectacled and fairly subdued for much of the film, Nic Tse plays a conman named Cool who, together with his father (the ever reliable Hui Shiu Hung) and cousin Karl (Chapman To -- whose over-the-top schtick really has gotten old and lame), cheat rich bad guys to fund the medical treatment of his seriously ill mother. Meanwhile, Cool's brother, Lionel (Philip Ng, in a small but eye-catching action role), is an undercover cop -- who gets into major trouble after his cover is blown during an operation to get evidence to nail major mainland bad guy Ko (Gao Hu).
Because of a giant teddy bear, Cool and Lionel's father's friendship with a top gambler turned Macau casino security chief (Chow Yun Fat), and Chow's character's daughter (Jing Tiang) falling for Cool, all of these parties get targeted by Ko and, in turn, team up to get the better of Ko.  This being a gambling movie, several gambling scenes also take place -- all of which involve the kind of abilities that are fantastic but also often are amusing too.
More than any of the four Chinese New Year movies out this year, From Vegas to Macau's ability to entertain rests on the shoulders of a single individual.  Fortunately, Chow Yun Fat is more than up to the task.  Although close-ups do show that he's someone who is, as his character points out, nearing the age of 60, he still can be charming and suave as well as super funny.
So I really do hope that he'll have more roles like this -- because as much as it's cool to see Chow Yun Fat striking masterful poses in guest-starring parts like the one he had in The Monkey King, the fact of the matter is that Hong Kong cinema's favorite son is way too good still to be used that sparingly or, worse, outright retire any time soon!
My rating for the film: 7
Posted by YTSL at 10:42 PM

Great reviews, YTSL! Judging by the box office results of the films in Hong Kong, it certainly looks like the HK people are choosing to buy tickets based on the scores you gave to each film. That's why Golden Chickensss is coming first and From Vegas to Macau is second! : )

Thanks fo reading and appreciating. And oh wow re the news that the HK people appear to be in agreement with me regards to the films! :)

I think the HK people trust what you say about films. And I suspect that The Way We Dance wouldn't have been the surprise hit that it became if it weren't for your very positive review! ; )

You way over-estimate my influence! But I have to say that I'm glad that my tastes seem to jive with that of Hong Kong moviegoers! :)