I spent the bulk of my final day in Vietnam in Hanoi's Old Quarter.  On my previous days in the Vietnamese capital city, I always had spent some time there -- because that's where the Serenade Hotel where I had chosen to lodge is located.  But in the final hours of my Vietnam vacation, I made a point to check out a number of attractions and stroll along the streets within this bustling section of Hanoi as well as do some last minute shopping in the area.

Something else I made a point to do was to take photos of what had fascinated me from day one of my time in the country: the motorcycle and scooter laden streets, the sidewalks that are invariably filled with wares spilling out of shops located in narrow buildings, people seated on small stools minding their wares but also just watching life go by, and the interplay among them all.

A note on the traffic: it's not just foreigners who can find it intimidating.  On morning while my mother and I were waiting to cross a street, an elderly Vietnamese woman appeared from seemingly out of nowhere, grabbed my mother's hand and made clear that she wanted my mother to lead her across the street!  After that, I started noticing anxious-looking elderly women standing on the side of streets and made a point to guide them across the street -- and was always rewarded with flashing grateful smiles afterwards! :D 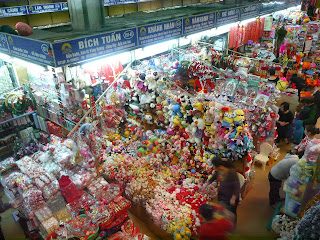 A section of the cavernous Dong Xuan market where
one can find foodstuffs, shoes... and plushies galore! 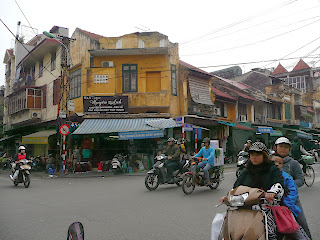 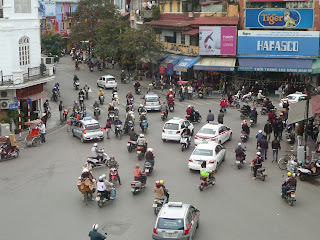 Believe it or not, this snap wasn't taken on a
particularly busy or chaotic time of the day! 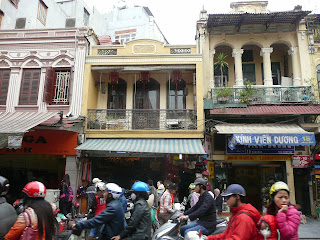 The Old Quarter's photogenic buildings fascinated me
almost as much as its street traffic ;) 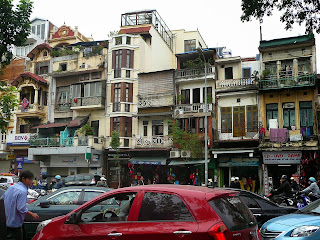 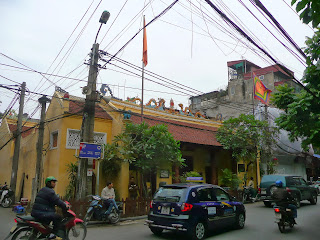 Hanoi's oldest temple, the Bach Ma Temple is modest in size
and doesn't look that old but has its origins in the 11th century 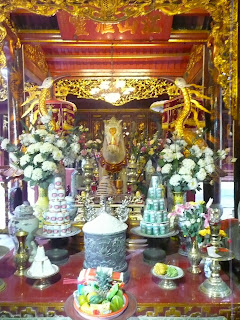 The Vietnamese bach ma sounds like the Cantonese pak ma --
meaning white horse -- and sure enough, the temple honors a
white horse thought to be the incarnation of a local river god! 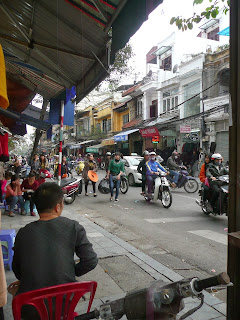 The Old Quarter is crowded but it's actually not
difficult to find a place to sit and chill for a bit :)
Posted by YTSL at 9:29 PM

I truly get a rush from this photo-essay. The photos really capture the dynamism of life on these streets. The different viewpoints of the photos, including overhead shots, give me the feel of being on these bustling streets.

I like the fourth photo from the top because it recalls the shop houses of SE Asia and even recalls the exteriors of Peranakan houses of Singapore and Malaysia...After this photo-essay, I'll put Hanoi on my wish list of destinations I might make it to one of these days.

I'm glad you enjoyed this photo-essay. And yes, there are some Vietnamese buildings that did remind me of old shop houses in Malaysia and Singapore.

Re the narrow Hanoi "tube houses": I've been in houses in Penang that are long and narrow too. And the "eel houses" of Kyoto are similar in that regard!