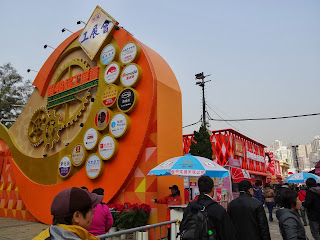 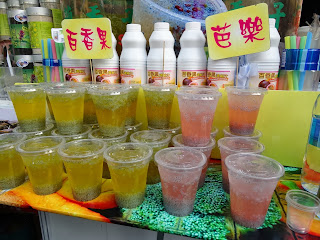 The colorful sweet basil seed drinks on sale there
were hard to resist! 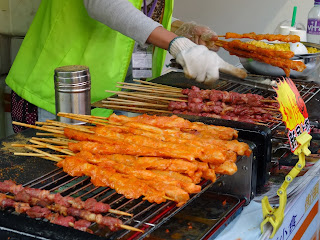 If I hadn't gone to the expo straight after lunch, I'd have
gone for one of these sticks of skewered meat too!!


A few weeks ago, The Fragrant Harbour blogged about chaotic scenes at the Hong Kong Brands and Products Expo.  Although I had been to it in previous years, that post had me wondering if I should give it a miss this year.  But when I passed Victoria Park yesterday afternoon and saw that the crowds for the expo didn't look so bad, I decided it'd be okay to do some bargain hunting there -- and so it proved as the place wasn't super packed, and definitely was less so than when the Chinese New Year Flower Market is held at the same venue.

Something else that has this expo comparing favorably to the Chinese New Year Flower Market is that I find more items that I want to buy there.  In particular, I find the food and beverage stalls to be attractive to me as a consumer as well as to photograph.  So after going and stocking up on the multivitamins that I take daily which were selling at a discount at the expo (like was the case last year and the year before that too), I made a beeline for the edibles sections.


This year, it was interesting to see a significant Malaysian food and drink contingent -- with Malaysian coffee looking to be pretty popular, to judge by the number of booths dedicated to that product and people milling around them.  In contrast, the one stall offering up Spanish ham that I saw at the expo didn't look to be attracting many people.  Perhaps people found its products overly expensive -- but, then, pricey Chinese edible products such as abalone, bird nest and aged Pu Erh tea looked to be popular buys for many shoppers.

Rather than going for any of those items though, I opted instead for just a modest bag of preserved plums and a refreshing pink colored drink with sweet basil seeds in it. I had thought the latter was going to be a rose water drink but it actually tasted more like a fruit -- albeit one that I am not familiar with!  No matter though -- I'm just glad it was pleasant and helped take away the awful taste of a honey olive lozenge I had been given and foolishly popped into my mouth to try!

Looking at the array of cooked food available at the expo, I rued having visited immediately after having had a pretty substantial lunch.  But since this event runs through to January 6 next year, I still have time to return for another visit -- and just might! :b
Posted by YTSL at 7:07 PM

Usual you can;t go wrong in a celebration with food.

Seasons greetings to you and thanks for the visit. :)

ooohh....I am thinking it must have been quite a treat to walk through there testing different foods. Yum.

I had to look up the meaning of Gooner.

Mind, I was testing the food just mentally for the most part as my stomach was too full to do any major physical testing! ;b

Teehee -- hope you found the correct meaning of it! :)