When I mentioned to a Malaysian friend that I was thinking of visiting Vietnam, she told me to expect to see lots of buildings and scenery that would look familiar -- and by that, she didn't just mean "international" (i.e., late 20th century Western) style buildings but also ones that wouldn't look out of place both in Malaysia and also where Chinese communities have historically existed.

But, as I told my mother while were there, much of Hanoi, the countryside between it and Ha Long Bay, and the small towns we passed along the way to Ha Long Bay actually got me thinking more of the parts of Africa I had lived in as well as visited decades ago.  Part of this is due to Vietnam's level of economic development.  Another, probably related factor comes from it being the dustiest part of Asia I've ever been to -- with its dustiness on par with the drier parts of East and Southern Africa that I've been to and in.

At Hanoi's Temple of Literature though, I did see architecture that definitely showed a Chinese influence -- not all that surprising, really, when it's modeled on the temple at Confucius' birthplace in Qufu, China, and is dedicated to Confucius along with homegrown sages and scholars.  Originally established in 1070 and home to the Imperial Academy that is looked upon as Vietnam's first university, much of what one sees today doesn't date back further than the 19th century -- which makes those portions that do particularly special and interesting... 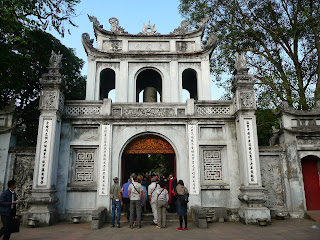 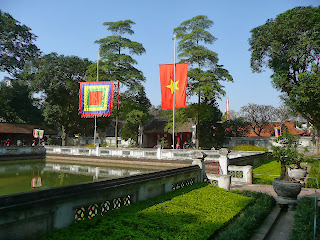 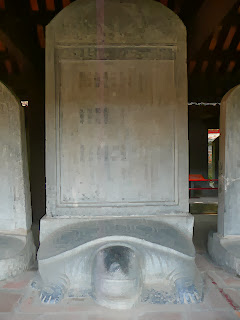 In the third courtyard can be found
82 stone stelae, each mounted atop large
stone tortoises -- see the example above 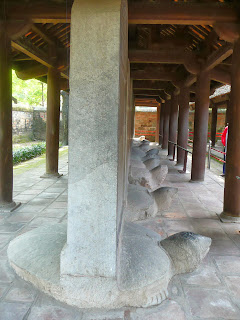 Each of the stone stelae is inscribed with
the names of scholars, and some of these
stelae date back to 1442 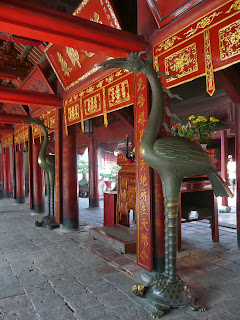 More turtles, this time propping up large birds
inside the sanctuary where Confucius is worshipped 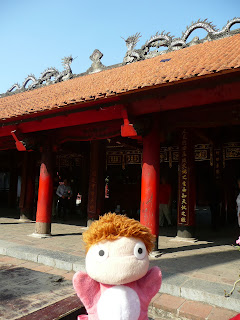 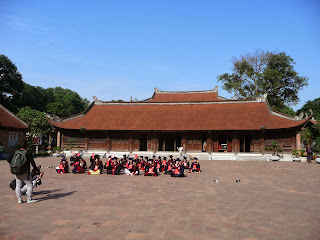 In the Thai Hoc Courtyard, we came across yet more happy
graduates -- some of whom had literally kicked off their
shoes to be more comfortable when posing for the camera! :) 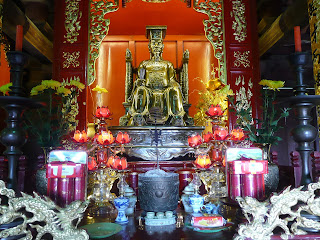 Despite his stern demeanor, I still think that this sage
would give those newly minted graduates his blessing though ;b
Posted by YTSL at 8:58 PM

It seems that everywhere one travels in Asia, they will encounter some aspect of Chinese culture which may become a memorable part of their journey. The Temple of Literature, as depicted in your photo-essay, seems like one of these memorable places. I especially like the bottom photo of the "sage" and the richly ornamental shrine.

Since Ms Ponyo has literary origins herself, no wonder she's beaming with pride in the sunlight, posing by a temple on the grounds of the Temple of Literature. In this complex of Confucius, sages and scholars - Ponyo does indeed have a scholarly and sagacious aura about her...

Ponyo, your face would even make a manic depressive smile...Ponyo, if the treacherous and wretched Siamese twins in The Bride With White Hair had seen your face, they would have been transformed into model ethical Confucians!

You may detect a scholarly air to Puppet Ponyo in this photo but don't think you would in other photos of her at the Temple of Literature that I took... that include one of her sitting atop a brass (bronze?) tortoise... and in the company of some lion dog type creatures... ;D