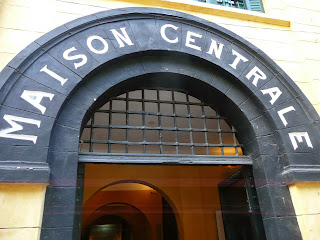 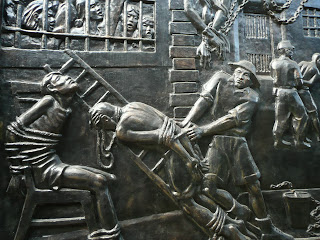 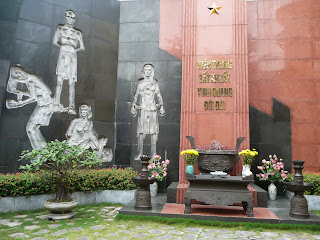 Within its grounds now lies a memorial monument to the
female as well as male Vietnamese patriots and revolutionary
figures who were incarcerated, tortured and killed there

On the fourth day of my visit to Vietnam, I visited two places established during the French colonial period of the country's history.  The first was St Joseph's Cathedral, where I imagine there's much talk of heaven and good things.  In stark contrast, the second was hell on earth for many of the inmates who spend time there.


Although Hoa Lo Prison gained infamy during the Vietnam War (or, as the Vietnamese call it, the American War) as the Hanoi Hilton, where American pilots who survived being shot down while on bombing raids over Communist-ruled Vietnam were sent, its history goes all the way back to the late 19th century.


I'm sure there are people who might wonder what I get out of visiting places like South Korea's Seodaemun Prison and Hanoi's Hoa Lo Prison.  On the negative side, I get reminded of the evil that humans are capable of and how institutionalized evil can be.  At the same time, it's in places like this where one also frequently come across tales of previously unimaginable courage, bravery, daring and also the ability for the human spirit to prevail and triumph against incredible odds. And talk of propaganda aside, you know those tales are real -- with the evidence often there for you to still see.

At Hoa Lo Prison, there is a guillotine that actually saw service for several years -- along with photos of people executed in that manner and, in one case, the heads of beheaded Vietnamese revolutionary leaders. Some cells, including window-less ones used for solitary confinement whose walls, floors and ceilings were painted black to make them truly dark (and frankly terrifying), also remain for people to see. On display on site as well are two underground sewer gates through which prisoners managed to escape in one of several successful escape attempts out of the prison during colonial French rule.

Maybe my memory's playing tricks on me but when thinking back to my visit to Hao Lo Prison, it seems like it was the least frequented of the places I went to in Hanoi.  At the same time as I can understand why this would be so though, I do think that this is a space that's worth keeping as is and visiting -- not least because, as the likes of George Santayana have stressed, those who don't remember the past are condemned to repeat it.
Posted by YTSL at 8:39 PM

Hi YTSL, I remember hearing stories about Hanoi Hilton. This is a thought provoking post. I believe that no matter how evil some of our past history was, I agree that we should not forget and those actions should never be repeated.

The very anti-war Imperial War Museum in London (which is located in the former Bedlam, no less) has a great motto: "That the past may serve". Add to that a lot of bad people liking to cover their tracks and one has an even greater imperative to make sure we don't forget the evil.