Is a Vietnam return on the cards? 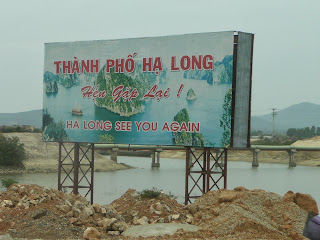 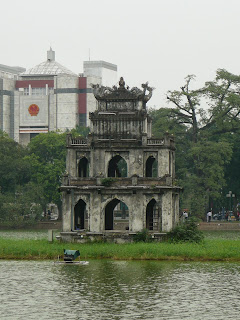 Like the modest-looking Thap Rua has done for
the denizens of Hanoi, Vietnam can grow on you 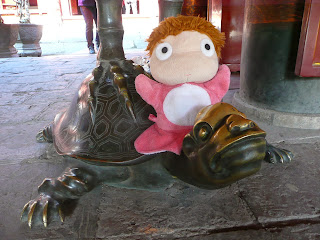 Puppet Ponyo -- seen sitting atop a bronze tortoise at the
Temple of Literature -- says she'd be game to visit Vietnam again!

While we were still in Vietnam, my mother -- whose second visit to the country it was -- and I discussed whether we'd be up to visit Vietnam again.  Over the course of our conversation, she talked about how she had enjoyed this trip so much more than her first one which she had gone on with her sister and family friends.
For one thing, she said, the food she had on this second trip had been so much better than what her party had had in Hue, Danang and Hoi An.  For another, she had been spared this time around from such sad sights as what she had witnessed on the way to the royal tombs of Hue -- specifically, she recounts, a number of women seated by the road with deformed and disabled children and infants, begging for change from passing tourist vans and buses.

Accounts like my mother's re Hue are what put me off visiting Vietnam for a long time.  And obviously, many of them are rooted in fact.  Hence her surprise along with mine re how we had been spared seeing and experiencing much of what made being in the country unpleasant for a number of people on this recent trip.
To be sure, there's no hiding the fact that Vietnam is still a low income country that's Third World, including in the way that many people use that description.  "You'll feel like a millionaire when you're in Vietnam," a Hong Kong-based friend of mine had told me -- and it isn't just because 1 million Vietnamese Dong is just HK$367 (or US$47) but because so much cost so very little there.  For example, a very large set meal at the incredible value for money New Day Restaurant cost just 120,000 Dong (less than US$5), and I bought a souvenir T-shirt for only 50,000 Dong while a cap cost just 20,000 Dong.
With prices like that, I frankly had no heart to bargain with the people selling those goods.  And this especially since I know that what's just a few cents, never mind dollars, to me still means quite a bit to many of the Vietnamese people that I came into contact with.
And that's the rub -- because the truth of the matter is that I really would prefer to holiday in places where I don't have to daily confront the fact full on that the world is so very unequal and unfair, and this especially where and when I frequently don't feel like I can do all that much to change things.  Hence my opting to spend my vacation more in, frankly, more well off countries like Japan, South Korea and Germany rather than Vietnam.
At the same time, at no point during my Vietnam vacation did I feel like I was being truly cheated.  And let's face it: there's a big difference between being on holiday in a place where people want your money but aim to come by it fairly and those kinds of places where people want your money so badly they think nothing of ripping you off, or even outright stealing from you, never mind just plain begging for any amount of a handout.

On a lighter note: I have to admit to having hankered more than once for some bun cha in the past couple of weeks and after searching for it in vain on the menus of Vietnmese restaurants I've eaten at since my return to Hong Kong, I am thinking I may need to return to Vietnam just so I can eat that wonderful grilled pork noodle salad dish once again! Still, I don't know when that'll be so -- yes, this will be my final Vietnam blog entry for a while... ;(
Posted by YTSL at 9:56 PM

It's fitting that your visually and historically informative Vietnam blog ends on a positive note with the possibility of returning there one day...

I detect a bit of unease on the face of the normally blissful Ponyo. She might have been frightened by the tortoise, which has the kind of anthropomorphic face that could give anyone nightmares...Well Ponyo, you've returned home safely to your siblings, to whom you can proudly relate your travel experiences - and then possibly dream about where your next travel adventure will be.

Actually, I thought Puppet Ponyo looked rather proud of being able to balance as well as she did on the tortoise! BTW, you may notice how shiny the tortoise's head is -- it's because the Vietnamese believe that touching it brings good luck. :)