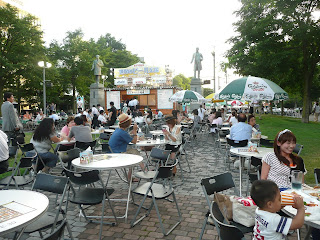 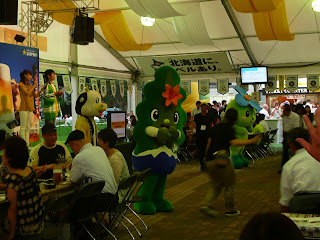 It also is a place where people have fun that generally
looks pretty good and clean (and, yes, kawaii!) 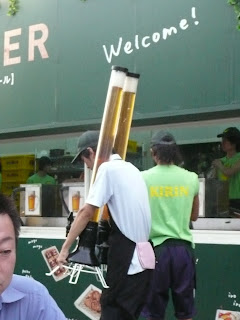 Let's not kid ourselves though about the main event
being the beer drinking -- and lest there be
any doubt, check out those Kirin beer towers! 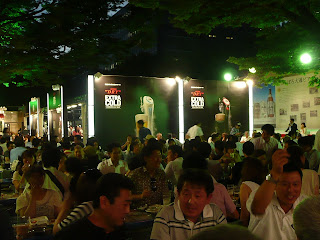 My favorite libations at the fest were the Asahi "Super Dry"
Extra Cold beers I had on consecutive nights at Odori Park! :b

In yesterday's blog entry, I mentioned how happy I had been to find out that the beery Sapporo Summer Festival would be on during my Hokkaido trip.  I didn't mention though that I went to Hokkaido with my mother -- and that this would be the first vacation we'd be on together since our 2009 South Korea trip.  Also that, unlike me, she most emphatically is not a lover of beer.

Prior to our heading over to Hokkaido, I had warned her that I planned to spend some time drinking beer in Odori Park.  Her response then was, "It's okay, I'll order soft drinks there", but when we got to Odori Park on the first evening of our vacation, she proceeded to tell me that she planned to sit in the non-beer garden area of the park while I spent time in the beer gardens, and only relented because I told her that I planned to be there for at leas a couple of hours and effectively made her walk through the beer gardens section to see: a) how vast it was; and b) how much fun one could have from people watching there.

Although I had not been to a Japanese beer garden prior to this recent Japan trip, the time I spent at German biergartens in Speyer and Berlin got me inclined to suspect that it'd be a pretty enjoyable place to spend some time in.  And so it proved -- with an added bonus being how family friendly the beer gardens set up in Odori Park are.

Admittedly, there's nicotine smoking allowed -- and no separate non-smoking versus smoking areas.  Also, I definitely saw signs stating that people under 20 years of age are not allowed to drink alcohol in Japan.  But, truly, there were many family groups about, with some of the kids present being of an age where they still were pushed around in strollers!  In addition, I honestly didn't see a single person among what what must have been thousands present who had descended from being post-work mellow or happily buzzed to unpleasantly drunk.

To be sure, certain beer gardens were quieter -- particularly the one serving non-Japanese beers -- and others -- notably those belonging to the Kirin, Asahi and Sapporo Breweries -- more lively.  But I uniformly saw females and males of various ages having a good time with friends and/or family while sipping their drinks and also snacking quite a bit (on such as edamame and takoyaki).


All in all, I have to say that I really love how nama biru (draft beer) is so readily available in Japan -- and also how fresh and smooth so much of the beer I've drank in Japan has tasted.  But on this visit, it only was at Odori Park that I had the added pleasure of drinking super cold -- with a frozen foam head even in one instance (Kirin), and served at a temperature around freezing in another (Asahi) -- beer.

And I am sincere when I use the word "pleasure" because, even though I tend to prefer my ales served at room temperature, I do enjoy very cold lagers, especially during the summer... and lest one needs reminding, the Sapporo beer festival does happen to officially be known as the Sapporo Summer Festival after all! ;b
Posted by YTSL at 11:45 PM

Although not a beet aficionado, I have learned to appreciate this delightful beverage in the past two years.

The beer gardens look great and even though Japanese tend to get drunk rather more easily than any other nationalities I have seen, they are pleasant and inclined towards either having fun or quietly passing out.

Cool to learn that you've come to appreciate beer. :)

Re the Japanese getting drunk more easily than other nationalities: I think you're mainly referring to their "Asian flush". But agree with you that they do tend to be pleasant drunks -- have never seen any aggressively drunk Japanese ever!

oh it is not the Asian flush. I have had the chance (?) to drink and get drunk at a few Asian countries and I truly think Japanese have the lowest alcohol tolerance. Their local drinks are also the most mild :)

I wish I was there at the beer gardens though, the atmosphere looks so mellow in the photos.

I have to say I'm not agree with your views of the Japanese as having the lowest alcohol tolerance -- not least because I see them regularly drinking quite a bit more alcohol than many other people, including Malaysians! And yes, before you ask: I'm an atypical Malaysian in that regard -- and an atypical Malaysian female especially... ;b