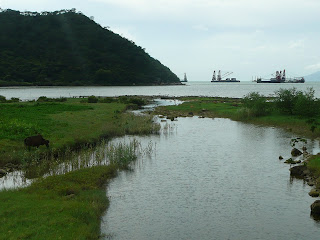 A cow grazes on the edge of Sham Wat Wan, oblivious to
the construction work on the Hong Kong-Zhuhai-Macau
Bridge which will radically change the landscape 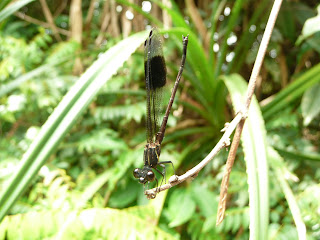 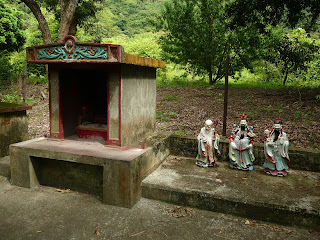 The village shrine looks old but that trio of figurines of
the Gods of Longevity, Wealth and Good Fortune weren't there
when I previously hiked along from Tung Chung to Tai O!

Earlier today, I hiked for the third time from Tung Chung to Tai O.  (Photo-essays chronicling the first time I did so -- back in 2007! -- can be found here, here and here!)  The two previous hikes along this circa 16 kilometer trail were undertaken during autumn months rather than in high summer as was the case today.  Yet I found the going much less difficult and tiring this time around -- and am going to credit this to my increased fitness over the years due to my walking and hiking more and more regularly.

When one's not so tired, one's ability to observe and appreciate more of one's surroundings increases significantly.  And while the friend I was with and I didn't stop to smell the roses (or any of the wild flowers spotted along the way), we definitely did stop every once in a while to take photos of the surrounding landscape and other interesting sights including cool critters that deigned to pose for me!

I wish other creatures such as the blue-tailed skink and butterflies of various colors and sizes I also spotted on the hike had been as willing to pose for me as the damselflies and many giant golden orb weaver spiders whose (particular) patch this part of Hong Kong is.  But if truth be told, even without them, there were ample choice of photographic subjects along this hike.

More specifically, since the trail from Tung Chung to Tai O is largely located outside any of Hong Kong's country parks, there are a number of cultural sights along the way.  For example, close to the start of the hike can be found the largest Hau Wong Temple on Lantau -- one which also happens to be home to a bell that dates back to the 30th year of Qing dynasty emperor Chien Lung's reign (i.e., 1765 AD).  Also, on sections of the path that go by villages (a number of which are still inhabited rather than (largely) abandoned, as is the case in such as northeastern Hong Kong), there also can be spotted a number of earth god shrines.

About midway along the hike, I additionally came across figurines of the Gods of Longevity, Wealth and Good Fortune by the side of the path. While I acknowledge that I was more fatigued and may have been less observant when hiking through this area of Hong Kong previously, I really can't recall having passed by these particular Fu Lu Shou on my previous Tung Chung to Tai O excursions.  So I have to conclude that they've been installed there only fairly recently -- a feeling that's made all the more stronger by the porcelain figurines still looking very clean as well as being in very good condition.

I wish I knew the why as well as when of this particular occurrence.  At the same time, it's also true enough that I've also seen many other porcelain figurines of gods (and goddesses) having been erected in what may seem to be unlikely places in Hong Kong -- including inside Tai Tam Country Park and at Waterfall Bay Park. So, if nothing else, I know that it does seem like a Hong Kong thing!
Posted by YTSL at 10:52 PM

Looks like an interesting hike. Your photo of the trio of figurines is enchanting.

Yes, it was an interesting hike -- and I wouldn't mind going on that trail for a fourth time at some point! ;b

Did you stop by the tuck shops in Sham Wat Village for replenishment? If not, next time, go and see if there are locally grown bananas, star fruit, and/or herbal tea. They also have noodles and green bean soup. If the season is right they might have local Artocarpus heterophyllus (大樹菠蘿)﹐ which is not as stinky as those from Thailand.

We stopped at one of the cafes at Sham Wat Village -- but only for drinks. It was so hot that day we weren't too hungry, just very thirsty!

Saw the bananas and herb tea for sale though. But they didn't have any green bean soup -- "just" a savoury red bean option.

Re Artocarpus heterophyllus: aah, yes, jackfruit! It's in season alright... ;b