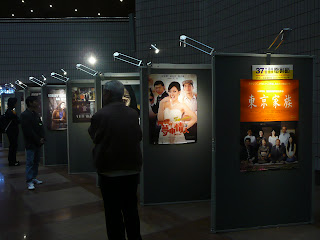 This week, I've viewed a grand total of eight movies -- one of them close to 4 hours long! -- of which five were Hong Kong International Film Festival offerings. But my "Most recently viewed movies" widget hasn't been updated since four movies ago due to a technical glitch that appears to be affecting other blogs besides this one.  So it's just as well that I'm writing about the films I've viewed at the HKIFF -- including three in this entry alone:-

The director some consider to be Japan's greatest ever filmmaker, Yasujiro Ozu, was born on December 12, 1903, and died 60 years to that day. This year thus marks the 110th anniversary of his birth and the 50th of his death.  And it also happens to be the 60th anniversary of Tokyo Story, the cinematic masterpiece considered to be Ozu's best.

As a tribute to Ozu, the 81-year-old filmmaker who may well be Japan's best living director, Yoji Yamada, decided to make a film inspired by Tokyo Story and with a similar storyline involving an elderly couple from a rural part of southern Japan journeying to visit their grown up children in Tokyo, only to find that the children are too busy to spend much time with their parents, never mind show them around the Japanese capital city.  However, the resulting work, Tokyo Family, has not received the most positive of critical receptions -- with more than one critic comparing it unfavorably to not just Tokyo Story but also Yoji Yamada's other films.

Perhaps it's because I went in to a viewing of the film with fairly low expectations because of what I had read about it.  Or maybe it's because I generally am a fan of all of Yoji Yamada's particular style and approach.  In any case, I did enjoy viewing this drama and consider it to have several touching moments -- notably those that saw the elderly parents (Isao Hashizume and Kaxuko Yoshiyuki) sensitively interacting with their youngest son's beloved (Yu Aoi).  In addition, this being a Yoji Yamada film, there also are some amusing touches -- and rather than consider them out of place in this film, I liked that within this one work could be found moments that alternately were loving, thought-provoking, sad and also laughter-inducing.

Chilean director Pablo Larrain's latest cinematic offering is unusual in many ways.  For one thing, there are the grainy, dated looking visuals that stem from his choice of u-matic camera and 4:3 aspect ratio for the film.  For another, there's the subject matter: i.e., the story of how an advertising executive came up with a plan for a successfully 'sell' a political campaign.

Amazingly, this thriller's story is actually based on actual occurences: more specifically, it depicts how a confident young man by the name of Rene Saavedra (essayed in this film by Gael Garcia Bernal) managed to influence a majority of Chileans to vote "No" against then ruling dictator, Augusto Pinochet, staying in power by getting them to 'buy' into the idea and concept of a happier future without Pinochet in charge.

Like with another thriller that came out last year, Argo, this Chile-France-USA co-production has an ending that people already know (or would if they knew about the historical events in question).  So it's a film in which what we're concerned is the process and the journey to the known conclusion.  The fact that No still can thrill and involve despite people knowing the outcome of the 1988 referendum is consequently quite the achievement.  Ditto re Pablo Larrain having managed to create a "feel good" work with a protagonist who could be said to cynically make use of what he knows about not only advertising techniques but, also, human nature!

Two HKIFFs ago, I had the unforgettable experience of sitting through 5 1/2 hours of Olivier Assayas' masterful Carlos. This year around, the Hong Kong International Film Festival gave me the opportunity to view a 227 minute (close to 4 hour) long film that was first released in 1962 -- and I eagerly seized the opportunity to do just that.

The winner of seven Oscars (including Best Picture, Director, and so very deservingly Best Cinematography, Color (for Freddie Young) and Best Music, Score - Substantially Original (for Maurice Jarre)), Lawrence of Arabia is one of those cinematic works with a gigantic reputation -- and, after finally getting to view it (and so ideally on a super big screen t the Hong Kong Cultural Centre's Grand Theatre), I can't but add myself to this amazing film's legion of admirers.

Truly an epic with what can look like a cast of thousands (or, at least, hundreds of extras), this historical drama centering on T.E. Lawrence (Peter O'Toole), the eccentric Englishman who united disparate Arab tribes and got them to do battle against the Ottoman Empire, is a grand cinematic work that is visually amazing, aurally mesmerizing and dramatically involving. Filmed on 70 mm, its incredible desert scenes absolutely astound -- and, to be honest, even while the film's cast is impressive, the real star of this work really has to be the desert itself, with David Lean's decision to film on location seeming like a no brainer in retrospect even while being quite the daring risk at the time.

Hahahaha! There's so much I could write about "Lawrence of Arabia" but I decided to limit myself to 3 paragraphs on the blog entry.

Still, now that you've mentioned it: yes, I was really surprised to see him wearing eyeliner -- something that seeing the film projected on a super big screen really made noticeable. :D

Would have loved to watch Lawrence of Arabia on the big screen! I guess the best I can do is with the Blu-Ray :(

Do you think there's any prospect of "Lawrence of Arabia" getting a big screen showing in Singapore? If so, I'd advise you to hold out for that. This is one of those films that truly is meant to be seen on a big screen.

I have only seen Lawrence of Arabia on the small screen but I can definitely agree with you that the desert stole the spotlight in many scenes. But I always had a problem with that film because I just never felt like the torture scene was convincing enough to make him change so drastically. I always wondered if something was cut from the film.

I would love to see it on the big screen though, lucky you!

When you watched "Lawrence of Arabia" on the small screen, was the screen blank during the overture performances or...?

Re the torture scene: I think there's a lot implied rather than actually shown there. Do an internet search re what happened to T.E. Lawrence in Deraa -- and you'll see what I mean.

Yes, blank screen for overture, at least on the dvd. I am sure I saw it on tv first, not sure what they did, probably filled up part of the time with commercials.

I remember I purposely rented the vhs (so it has been a long time now) to see if the tv version had edited that scene because it had puzzled me. But as far as I could tell was the same. I guess it was just too subtle for me. I don't need things to be spelled out generally and I am not a fan of torture scenes but both times I saw it I was left unconvinced. Whether he really went through what he said he did has been in dispute I guess but still the film is what I am going by and I needed more.

I know that sometimes filmmakers feel that when their film is about a historical figure that they can expect the audience to fill in the gaps themselves but I personally find that to be a bit presumptuous on their part. Especially if they think in the long term, this film is 50 years old, most people only know Lawrence because of this film. Or maybe I am just being stereotypically American on this point.

I don't think it was (merely) a case of David Lean having been presumptuous in expecting the audience to be able to fill in the gaps because "Lawrence of Arabia" tells the story of a historical figure. Rather, I think that he understood that in that particular case, less is/was more.

And I consider it a real pity that he appeared to have forgotten that maxim when making his final film, "A Passage to India" which I really disliked for it having not left the conclusion open to interpretation like I felt that E.M. Forster had done in his novel.

I haven't seen A Passage From India yet so I can't comment on that.

True, often less is more but I know for a fact that I am not alone in my perspective on Lawrence of Arabia, but I also know others like you who think we are blind (for lack of a better word). But that is okay, I still think it is a great film, I don't let that one thing spoil it for me.

FWIW, E.M. Forster is one of my favorite authors of all time so I think I'm a bit more sensitive than most people re film adaptations of his novels...

Back to Lawrence of Arabia: Different strokes for different folks. But yeah, I have to say that I don't need things to be spelled out all the time for me -- and that's one gripe I have about a lot of Hollywood movies vis a vis ones from other parts of the world.