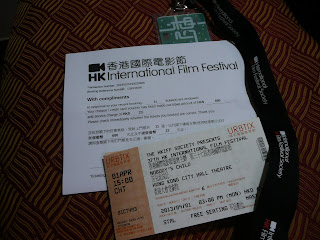 Yes, it's that time of the year again!


This evening, the 37th Hong Kong International Film Festival (HKIFF) officially got underway with two screenings of the fest's opening film -- Herman Yau's Ip Man - The Final Fight.  Rather than attend one of those screenings, I'm at home recovering from an exhausting but enjoyable hike I went on in northeast Hong Kong earlier today.


Before those of this blog's readers who are Hong Kong film buffs howl in frustration over my choice, here's pointing out that I already viewed this particular movie -- which has Anthony Wong Chau-sang portraying Ip Man, and very creditably too -- a few weeks back (and yes, I do like it a lot).


And for the record, I've also viewed Ronny Yu's Saving General Yang (which, like with Herman Yau's film, is officially getting its world premiere at the Hong Kong International Film Festival), Jacques Audiard's Rust and Bone, and  Sean Baker's Starlet (which is having its Asian premiere at the Hong Kong film fest).  So theirs too are not among the 11 HKIFF screenings that I've got tickets for this year.


Something else that people might find unusual is the relatively paltry number of tickets to HKIFF screenings that I've bought this year.  (For a comparison, I bought 16 tickets to last year's HKIFF -- and 21 to the 2011 edition along with another six to the extended portion of that year's unusually lengthy festival that ended up running through to May).

One reason for my having purchased fewer tickets for this year's HKIFF is that since September, I've got a job that requires me to often work on weeknights as well as during the day -- so I don't want to buy too many tickets to screenings that I might end up not being able to attend.  Conversely, I also may end up getting to view certain movies in the HKIFF program even without purchasing tickets for the screenings -- so/but the 11 films that I've bought tickets for are the films I really am hoping that I catch at the fest.

Another reason is my current job involves watching a good share of movies as it is (I'm now averaging about five film screenings a week even without the HKIFF taking place).  So I am trying to pace myself and not get "movie-ed out" any time soon!


One other consequence of my current work situation is that I won't be able to write as lengthily and promptly as I've done in recent years about the films I view at the Hong Kong International Film Festival.  At the same time though, I do intend to write something about them at some point -- because I find that doing so helps me to better remember the films I view as well as reckon that there is an audience for this that I do appreciate, however small in number it may be!

And should people wonder: the first screening on my HKIFF schedule this year is tomorrow evening's screening of Evan Leong's Linsanity, and the final HKIFF screening I am hoping to attend is of Jafar Panahi and Kamboziya Partovi's Closed Curtain (the fest's official closing film).  So I've indeed once again gone for a mixed bag of cinematic offerings -- though it also is the case that five (i.e., close to half) of my choices of movies to watch have Hong Kong directors at their helm, including a few from The Cinematic Matrix of Golden Harvest program that will continue after the HKIFF officially closes on April 2 and run through to June 30 at the Hong Kong Film Archive. :)
Posted by YTSL at 10:29 PM

I hope to make it to the Fest one of these years. I've only been back home from HK for 2 months and I miss it terribly :(

I'm glad you had a good time in Hong Kong. And yes, attending the HKIFF is something I'd recommend to Hong Kong movie fans. (And I'm writing here as someone who would fly from Malaysia to Hong Kong to attend the HKIFF -- though it's true that I thought it too far to do from the US... ;b)

Hi YTSL, I would have been there now had it not been for my illness, so very frustrating! It's now five years since I last visited the fragrant harbour and I too miss it terribly.

Have you got a ticket for Drug War by any chance? I hope you enjoy the screenings you do attend.

Sorry to hear about your illness and it preventing from making a return visit to Hong Kong in recent years. Hope you're better now and will be able to visit again before too long.

Nope re "Drug War". I probably will watch it outside of the HKIFF -- know that it's getting a commercial release in Hong Kong soon. :)