Spring day hike up and over Kai Kung Shan :) 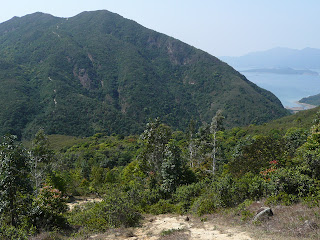 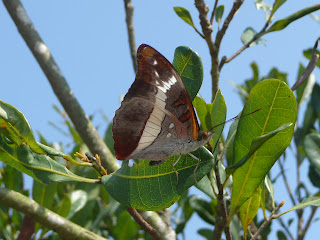 Strange but true: I've noticed this particular species of butterfly
posing comfortably atop more than one Hong Kong peak 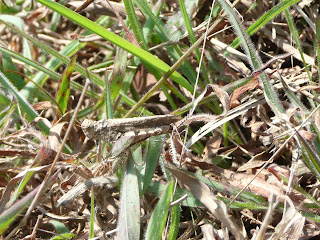 Also out this afternoon -- though harder to spot on account
of its camouflage -- was this mud colored grasshopper! :b

Another Sunday, another hike -- and another Hong Kong peak conquered!  Whereas last week, it was 465 meter high Lo Fu Tau on Lantau Island, this week, it was 399 meter high Kai Kung Shan (Cantonese for Rooster Hill) in Sai Kung West Country Park.  And whereas the maximum temperature last week was around 21 degrees Celsius, today's high has been reported on the Weather Underground of Hong Kong website as a considerably warmer 29.3 degrees Celsius!

Although there's no denying that last week's hike from Discovery Bay to Mui Wo via Lo Fu Tau was more challenging than today's (on account of it involving a steep climb up the 465 meter high hill from sea level Discovery Bay), this afternoon's hike also was no picnic -- this despite our trail having begun in the vicinity of Lady Maclehose Holiday Village rather than further away at the official starting point of Maclehose Trail Stage 3.  One big reason for this was that it's warmed up considerably this week compared to previous weeks -- though, thankfully, it's not become super humid yet.

Many hikers rue the onset of warm weather and some even stop hiking completely during the hotter months in Hong Kong.  I can understand why they think this way but, at the same time, I've also noticed (as has Hidden Hong Kong (and Macau)'s Phil) that it's when Hong Kong has warmer weather that the sky tends to be noticeably bluer and the air discernibly less polluted.  And for the record: it was indeed the case that this afternoon was considerably brighter as well as warmer than last Sunday's.

Something else to look forward to while out hiking during the warmer months is that the hills and the rest of the countryside once again come alive with all manners of critters.  And this afternoon, I lucked out in that my hiking buddy and I didn't come across any snakes on our trek (and didn't come away with any mosquito bites) but we spotted quite a few butterflies out and about, and I also spotted -- and managed to take photos -- of at least one grasshopper and several spiders that were considerably smaller than the Golden Orb Weaver but whose webs appear to be made out of more reams of spider silk.


I also appreciated that today's hike was generally more colorful than last week's -- and not just because of the different species of beautiful butterflies that were flitting about this afternoon.  For one thing, the sky was so bright blue in places that it seemed as it was sparkling.  For another, the bright sunshine and clear air helped accentuate the green of the leaves and other fauna that covered much of the countryside we passed through today.  For a third, a number of flowers have bloomed in the area.  Add the sightings of birds as well as the sounds of them singing away -- and I have proof and am happy that spring's indeed here! :)
Posted by YTSL at 9:49 PM