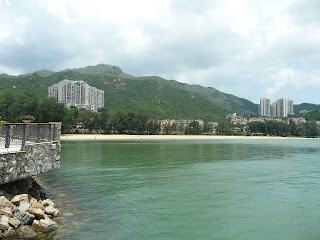 See that steep trail leading pretty much straight up
the hill in the foreground and visible again
close to the rock face in the distance? 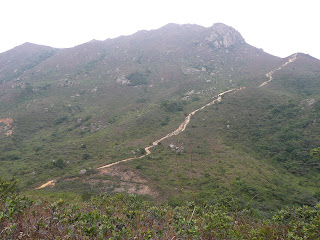 The upper part of the trail in both pictures above
are one and the same! :) 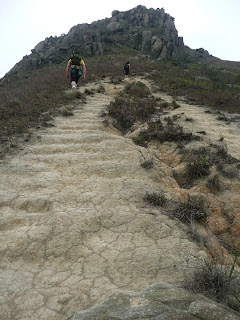 Guess where two hiking buddies and I trekked up today! :b

One hot July afternoon a couple of years ago, my then regular hiking companion (who -- sadly for me -- moved back to Canada two Februaries ago now) hiked from Discovery Bay to Mui Wo along a route that took us past the Trappist Haven Monastery.  Earlier today, two other hiking buddies and I went on a much more difficult trail that took us from Discovery Bay to Mui Wo via 465 meter high Lo Fu Tau (Tiger Head in Cantonese).
Earlier in the week, the daytime temperatures rose as high as 25 degrees Celsius.  So when I saw that the temperatures today were forecast to be only in the upper teens instead, I got to thinking that we might have our last cool weekend for a while -- as in maybe not again until November -- and that we should go for the last hard hike for the season today.
After getting okays from two friends (but not a third who decided that the proposed hike would be too much for her), we headed in the early afternoon to Discovery Bay, with the hike proper beginning pretty much at sea level just a few minutes walk away from its ferry pier.  We almost lost one of our party early on when she saw how steep the start of the hike was -- up at least over 600 steps until we got to a level area again.  But after she got her second wind, she ended up leading the way later on in the hike up to that Lantau Island peak!

For my part, I was okay with the early part of the hike but found the climb up Lo Fu Tau to be more challenging!  Heck, I even found some photographs I found of it online to be on the intimidating side!!  But am I glad that I went up it today -- and yes, I do feel quite a sense of achievement from doing so!!
This is not least because many years ago, I had bailed out early on from a Roz's group hike that began in Discovery Bay and I latterly got to realizing was one that went up Lo Fu Tau before descending to Mui Wo.  My needing to abandon the hike early on as we went up a steep trail had filled me with a sense of shame and inadequacy -- at least until I went to see a doctor the next day and was told that I had bronchitis!  Still, it was nice to finally do the hike I had meant done in my first year of living in Hong Kong -- for as the proverbial "they" say, "Better late than never!" :b
Posted by YTSL at 10:18 PM

That beach area in the first photo looks nice! Did you check that out?

Haven't checked the beach area in much depth but my sense is that it's not as nice as the beach at Mui Wo, never mind Cheung Sha. You tempted? ;b

Quite an accomplishment--hiking up a trail like that can seem like climbing a very long ladder before you are half way done. You and your hiking companions must be in good shape for a trek like that.

I have to say that I really did feel a sense of accomplishment upon getting to the top of Lo Fu Tau. After that, even though the actual geographic distance down was longer, it was easier -- especially since the way down that we took was way less steep too! :)