Five films viewed over the past five days 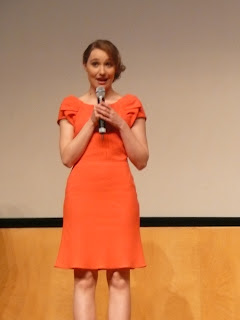 For those who haven't yet noticed: I have a Most recently viewed movies section on this blog's sidebar that lists the five most recent movies I've viewed.  As I write this entry, all five films on the list are ones that I've viewed in the days since the 37th Hong Kong International Film Festival (HKIFF) got going this past Sunday -- and are indeed films that are part of the fest's program.


Since I'm planning to view another three movies this weekend (at least one of which will be a Hong Kong production!), some of those entries will soon be replaced by others.  So I figure I might as well note down the five films currently on the list, and add a few comments re them of my own for posterity's sake. So, here we go, without further ado...


So many characters in this spy thriller that's set in Berlin -- but has mainly Korean (North as well as South) protagonists -- get introduced into the picture in the first 20 minutes or so of the film that it can feel well nigh overwhelming.  But once things settle down -- at least in terms of it getting more obvious who are the key personalities in the work -- the movie becomes one with a number of involving and intriguing stories and sub-plots.

Well-acted, as might be expected from it boasting several star thespians (at least one of whom -- i.e., Jun Jyi Hun -- I actually failed to recognize because the character plays in this offering is significantly different from her My Sassy Girl (and The Thieves) personae), the film also benefits from being well paced.  And while it does get too overly melodramatic for its own good towards the end, I, for one, still am looking forward to a sequel that looks to have been planned right from the start!

For the record: this documentary about Jeremy Lin that its director (who was present at the screening I attended) described as "a legacy film" was actually the first work I viewed at this year's HKIFF (since I viewed The Berlin Files at Filmart), and I consider this offering that had its world premiere at Sundance and was given its international premiere at the HKIFF to be a solid enough work with which to begin my film festing this year.

If truth be told though, I was hoping for something more magical -- considering that the Jeremy Lin story can't help but be a great subject, and that this film's makers had had access to the basketball player who's currently the only Harvard University graduate as well as Asian-American playing in the NBA from before he turned pro as well as burst into the limelight and caused the term Linsanity to get coined.  Greater depth of coverage and analysis also would have been appreciated -- including in looking at the racism that Jeremy Lin has had to face.  Also, what was with the insertion of the Gangnam Style music into this documentary's mix?!

On a more positive note: it was cool to see the film footage of Jeremy Lin from before he went to college -- and of the young man who comes across as pretty likeable indeed outside of the basketball court.  And even though we've seen the highlights of Linsanity (many times) before, it still was pretty cool to watch again those incredible moments such as that shot in the game versus the Toronto Raptors (which probably still ranks as my favorite Jeremy Lin sporting moment thus far). :)

A few weeks ago, I viewed another France-Belgium co-production in Rust and Bone that's as heavy as Populaire is light. A breezy period romantic comedy revolving around a young secretary with super fast typing abilities (and her boss who coaches and enters her for speed-typing competitions), this film that's set back in 1959 has a generally fun fantasy feel to it.

A work whose makers looked to have aimed for it to be loved (and, yes, popular), there's also no denying its nationalist (in particular, a "rah rah France") overtone.  When coupled with its overall picture being pretty white (despite the 1950s having seen waves of immigrant arrivals to France), it can feel like this was one of those movies that was intended to travel far from its homeland(s).

Still, it's easy to not think too much about such matters when viewing the film and be charmed instead by its charismatic lead actor and actress.  More than incidentally, Deborah Francois also proved to be quite the charmer when making an appearance at the screening I attended -- so much so that she made the post-screening Q&A quite enjoyable despite others who participated in it.

The kind of work that definitely falls into the art house film (and even "strictly (film) festival fare"), this Mohsen Makhmalbaf offering is a discussion of the pros and cons of religion that largely takes place in the garden of the Baha'i faith's Haifa headquarters.  In a novel development, the film's makers also are the main people on screen -- with their being filmed filming as well as debating, with the film's director looking at the positive side of religion and his son Maysam focusing on its negative side.

A rare Iranian film that was shot in Israel, it also is notable for the international quality of the people featured in the work -- with such as a Papua New Guinean man (Eona Ririva is the titular character, in fact), a woman with an African-American mother and a Namibian father, and a number of American accented individuals -- all of them Baha'is -- being profiled in it.  In addition, some mention is given to the historical leaders of this religion that was founded in Iran less than 200 years ago -- but even with that, the distinct sense one gets is that the filmmakers are actually less interested in making a film about Baha'is and more about religion in general (and its role(s) in the world).

An Episode in the Life of an Iron Picker (Bosnia and Herzogovina-France-Slovenia-Italy, 2013)
- From the Global Vision program
- Danis Tanovic, director
- Starring Senada Alimanovic and Nazif Mujic

Back when I was living in Philadelphia, I viewed -- and was blown away -- by a war drama called No Man's Land, so much so that the name of its director was etched in my memory. So when I saw that there was a film by Danis Tanovic screening at this year's HKIFF, I decided to check it out -- all the more so upon learning that this particular work had won some awards at this year's Berlin International Film Festival.

A documentary-like work with people playing themselves (and essentially re-enacting some events that had happened in their lives), it is a powerful depiction of impoverished, lower class life and plight in Bosnia and Herzogovina. Early on in the film, it's really noticeable how the adults in it still do so many things manually and so much of what the men do involves -- nay, requires -- sheer brute force.  All in all, the work serves as a valuable reminder of how terribly unequal the world is, and how (having or not having) a little money can be the difference between life and death for some.