An evening to remember at Sasagin 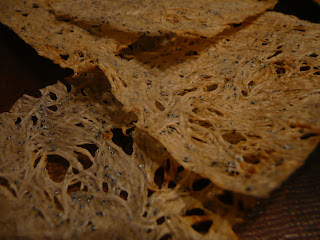 Tatami iwashi -- i.e., dried sardine crackers (and yes,
I think the shiny bits are the eyes of the sardines...) 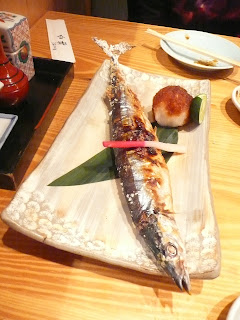 Grilled sanma (Pacific saury) also was on the menu 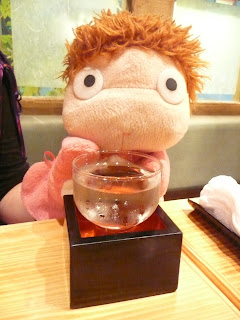 But as Puppet Ponyo would attest, the main draw
at Sasagin is the extensive range of junmai,
junmai ginjo and junmai daiginjo sake on offer there!


Before I left for my Japan vacation last month, a friendly colleague who had lived in Tokyo for a number of years asked me if I loved sake.  I told her that although I'm hardly a sake expert, I do have a fondness for junmai sake (AKA junmai-shu).  If that's the case, was her response, then you should make it a point to go one evening to Sasagin, a sake bar-izakaya that she had gone to review for Metropolis Tokyo and subsequently become a regular at.

After discussing it with her, a friend who lives in Tokyo told me she'd like to go and try it too. So one evening, off we went to that drinking-dining establishment in the Yoyogi-Uehara section of the Japanese capital city that appears to be off the beaten tourist track but has a selection of interesting eateries and drinking holes.

As we looked at the super extensive (and interesting!) sake menu, I suggested a plan that involved our ordering three cups of sake each and taking a sip from the other's cups -- so that we could come away with having tried six different types of sake by the end of the evening. My friend readily agreed to the proposal and we proceeded to order our first round of sake along with a few dishes of food (including a standard sashimi platter but, also, more unusual food like tatami iwashi (see this blog entry's top photo and its caption), grilled sanma and a really delicious agedashi (deep fried foods in dashi stock) assortment that included a variety of vegetables as well as the more usual tofu).

After the sake arrived and we tasted it, however, we realized that we were in trouble -- because the sake we had ordered and drank was so very good in a thoroughly revelatory way that we couldn't settle for just 3 cups of sake each!  And a couple of hours later, I realized that I was on the soused side -- even though I had taken care to drink fairly slowly and make sure that I did not drink on an empty stomach.

Fortunately, I was not so far gone that I didn't know that we would have to stop some time (soon) -- and before the trains stopped running (because I most definitely did not want to pay for a taxi in Tokyo!).  At the same time though, soused or not, the truth of the matter was that I really was having such a good time at Sasagin that, as I wailed aloud to my friend, there was a part of me that didn't want to ever leave the place!!

By the time we finally said our goodbyes (in my case) and see you soons (in the case of my friend, who thanked me for having introduced me to a place that she could see becoming a favorite and regular drinking-dining spot) to Sasagin and its genial host-owner, Narita-san, my friend and I had tried Junmai, Junmai Ginjo and Junmai Daiginjo sakes -- and had decided that we liked the middle range Junmai Ginjo best (because the Junmai Daiginjo we had ordered had been -- as strange it sounds -- too pure and refined for our palates even while our palates could appreciate that the Junmai Ginjo we had drank was noticeably smoother, and consequently more pleasant, than the straight Junmai we had sampled).

It was a toss up though as to which of the Junmai Ginjo we liked best of the ones we had tried.  All I can say is that we sampled regular, dry, extra-dry, unpasteurized (nama-zake) and cloudy (nigori-zake) Junmai Ginjo -- and we loved them all, with not a single sake having disappointed in the taste department!

All in all, by far the biggest regret of my recent Japan trip is that time constraints made it so that I didn't get to pay one more visit to Sasagin before it was time for me to return to Hong Kong.  If only it was open on Sunday (which was the first night my friend had tried to make a reservation for, only to discover that Narita-san's establishment is closed that day)... but, then, it probably was good for my liver and wallet things turned out as they did!! ;b
Posted by YTSL at 10:34 PM

What a big glass of sake Puppet Ponyo has in front of her. What was her favorite?

To be honest, I didn't allow Puppet Ponyo to drink any sake -- she's underage after all! So her favorite must be the one she's cradling in the photo since that's the closest she got to any of the sake at Sasagin! ;b

I have a fondness for nigori...when I want a clear liquor, I drink gin!

On the subject of nigori: I just tried sparkling cloudy sake for the first time last night -- and liked it a lot!

Re gin: I quite like it too -- although not on its own! Instead, I like gin and tonics, and Tom Collins... but for martinis, I prefer vodka!:b

How can little Ponyo eat grilled sanma???!!! He is eating his own breed! Oh no!

*Scream* Little Ponyo did not eat sanma! *She* most certainly would not do something like that!!!