The joy of eating in Japan 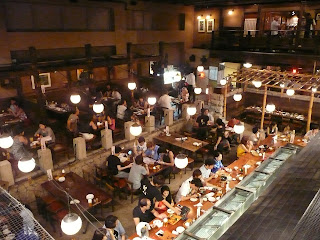 The main area of the Nishi-Azabu branch of Gonpachi 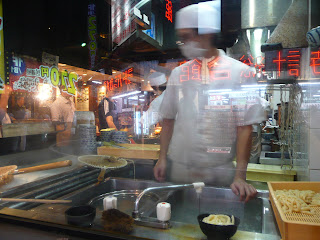 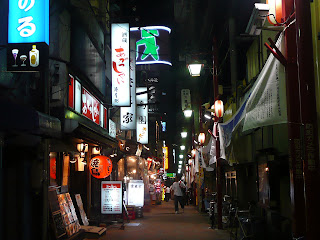 Earlier today, I was talking with a friend about how one reason why I like Japanese restaurants is that they are places where single diners are welcomed and can feel very comfortable.  While we were talking specifically within the context of Hong Kong, I have found this state of affairs to be the case in Japan itself as well.

Alternatively put, I really have no problems dining alone in Japan -- be it for dinner or lunch.  In addition, my long standing love of Japanese food has vested me with an adequate Japanese food vocabulary that I've found it fairly easy to order food in Japan even in restaurants that do not have a non-Japanese menu.  Which is just as well since on my recent Japan vacation, the majority of the meals I had involved my dining alone in restaurants whose menus didn't have any English or other non-Japanese wording or characters on them!

Somewhat ironically, the two meals that I had with a friend who lives in Tokyo were at eateries that had bi-lingual Japanese and English menus!  And while I'd expect it of Gonpachi since it was recommended in the Frommers' Guide (that's one of two Japan guidebooks I utilize a lot), both my friend and I were surprised to find that Sasagin, a specialist junmai sake bar-restaurant located in a not particularly touristy neighborhood that had been recommended by another friend (who now is Hong Kong-based but had previously lived in Tokyo) also did have English language sake and food menus.

Although I ate plenty of sushi (including sushi for breakfast twice at Tsukiji!) on my recent Japan trip, I did eat plenty of other Japanese food over the course of my vacation.  A number of my meals were at izakaya (of which Gonpachi is a particular atmospheric example) -- so involved eating a variety of dishes along with imbibing significant amounts of alcohol.  At other times, however, I sought out places that specialized in a particular type of Japanese food -- like udon (the thick, white colored wheat flour noodles that I got particularly into after viewing the movie entitled Udon!), soba (brown buckwheat noodles), tempura or yakitori.

One of my fondest memories of a previous Japan vacation involved eating yakitori (and drinking draft beer) under the train tracks at Ueno.  One evening on this most recent trip, I decided to try eating yakitori and drinking draft beer at West Shinjuku's Shoben Yokocho/Omoide Yokocho -- which is located by (rather than under) the Shinjuku Station train tracks. Because it was a hot (temperature wise) evening, I opted for an air-conditioned eatery -- and, in the process, went a bit more upscale than had been the case at Ueno.  Accordingly, the eatery I had dinner at in West Shinjuku had a quieter and more sedate atmosphere than the Ueno yakitori-ya I had previously gone to.

The food, however, remained pretty rustic fare -- especially since I ordered some sticks of chicken "innards" as well as shitake mushroom and gingko nuts.  As it so happened, I also inadvertently ordered -- yes, it was one of those places that didn't have an English menu and also no waitstaff who could speak English... -- what's best described as "innards stew" which, thankfully, turned out to be pretty tasty as well as substantial!

In all honesty, I've never eaten anything really bad tasting in Japan -- even with my sometimes having taken a chance when ordering something or having inadvertently ordered something different from what I had planned to do!  Indeed, so much of what I've eaten there has been very delicious! And that's one reason why it's one of the places in the world that I really could happily go primarily to eat -- though I actually have yet to do this since there's so much else that I like to check out whenever I find myself in that East Asian country that truly has come to be a favorite part of the world to visit!!
Posted by YTSL at 10:25 PM

Many of my friends have good memories of Japan and its food while holidaying there. I have yet to go but looking forward to my first trip. Thanks for the tips.

I highly recommend Japan as a place to visit. It's got lots of splendid, interesting and unique sights -- and the people are amazingly courteous and also can often be surprisingly friendly and funny. :)

I'm going to take that as a compliment! Also, no problem -- there are plenty of Japanese restaurants in the city you're currently living in! :b