A Tale of Two Tombs at Ueno Park 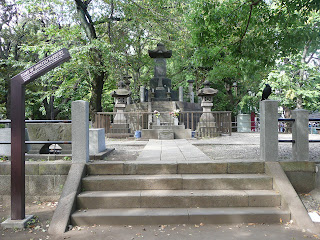 The Tomb of Shogitai Warriors in Ueno Park 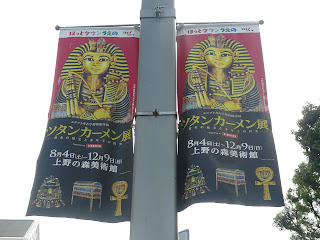 When I was a good deal younger than I am now, I dreamnt of becoming an archeologist and going to Egypt and doing such as discovering the final resting place of an Egyptian pharoah like Tutankhamun or Hatshepsut.  Although those dreams have been long since abandoned, I have retained a fascination with Ancient Egypt -- and continue to yearn to visit Egypt (in particular the Valley of the Kings and Cairo's Museum of Egyptian Antiquities) some day.

Meantime, although it may seem like a poor substitute to those who have had the good fortune to go to those legendary locations, I've also treasured the visits I've made to those museological institutions that are rich in ancient Egyptian material culture such as the British Museum (which is home to the Rosetta Stone) and Berlin's Egyptian Museum (which is home to a beautiful bust of Nefertiti).  Still, if truth be told, my Holy Grail -- so to speak -- actually was the famous tomb treasures of Tutankhamun that Howard Carter discovered in the Valley of Tombs one November day in 1922.

So imagine my excitement upon discovering on my recent Japan visit that the Ueno Royal Museum was playing host to the Tutankhamun and the Golden Age of the Pharoahs exhibition of more than 120 artefacts from Pharoanic tombs, including 50 from the tomb of Tutanhkamun himself!  And of course I had to go check out the exhibition -- even if the price of admission to it was a whopping 2,700 Yen -- frankly, the most I've paid to visit any exhibition or museum ever!!

Upon arriving at the museum in Ueno, I found that many other people were undeterred by the high admission price and, frankly, worried that it'd be a zoo inside the Tokyo museum the way it had been in a couple of the galleries of the Picasso exhibition at the Hong Kong Heritage Museum.  Fortunately, things were quite a bit better organized; so even while there were a lot of people intent on viewing the exhibition, the exhibition area was not uncomfortably over-crowded.

I also was impressed by the way that the objects on exhibit were arranged, and the general thematic structure of the exhibition.  At the same time, it's true too that the stars of the shows were the items on display themselves -- all of which were thousands of years old and some of which appeared to be in amazingly good condition, considering their age.  And while the glittering gold artefacts obviously grabbed people's attention, I found myself intrigued once again -- like I had been as a child visiting the British Museum -- by how it was that people who lived thousands of years ago availed themselves of such as perfume (as witnessed by a polychrome perfume bottle that was on display as part of the exhibition).

More than incidentally, while waiting in line (and what a long line it was) to enter the Ueno Royal Museum to view the ancient Egyptian tomb treasures, I found myself at one point near what a sign pointed out was the Tomb of the Shogitai Warriors who had perished in a battle fought in 1868 in the very area where Ueno Park now lies.  Although physically quite impressive, that particular tomb didn't seem to merit more than a glance, if that, as far as most people in the queue for the Tutankhamun exhibition were concerned.

Still, my curiosity was aroused and after I had toured the Tutankhamun exhibition, I went over to the Tomb of the Shogitai Warriors to take a closer look at it.  While doing so, I came across a plaque put up in the vicinity that stated that the Shogitai were a Shogunate army that had been organized to fight against the Emperor at the end of the Edo period (1608-1807) and that many of its members had died in a battle so fierce that many temples and pagodas that previously had stood in the area where the fighting had taken place were destroyed with little trace.  I also learnt that there actually were two tombstones erected: one by a temple priest one year after the Battle of Ueno and another by a survivor of that battle.

Thus it was that I went to Ueno Park to view treasures from a tomb halfway across the world from Japan -- and, along the way, came to know about another, much less heralded tomb; one with an interesting story of its own -- involving those who perished in a battle and whose side lost the war won by the forces of none other than Emperor Meiji, the ruler credited with having brought Japan into the modern age and set it on its way to becoming a major world power.
Posted by YTSL at 11:35 PM