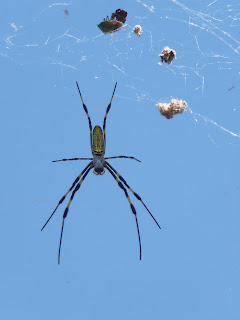 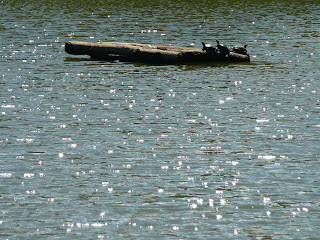 At Sankeien Garden, the pond surface was downright glittery
at times -- but the terrapins that were among the pond's
regular residents didn't seem to mind ;) 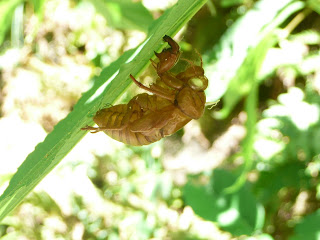 I'm not certain if it's an insect or just its exoskeleton but
I definitely did spot plenty of such while wandering and
looking about in that Yokohama stroll garden! 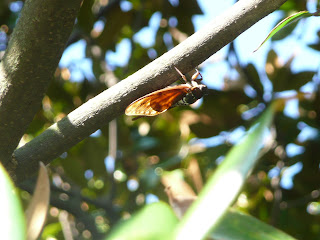 I didn't actually see that many cicadas at Sankeien but I sure
did hear them while visiting the garden (and, for that matter,
pretty much everywhere with any modicum of greenery)

28,932.  That was the total number of steps registered on my pedometer on the first full day of my recent Japan vacation.  For although the weather most certainly was on the hot side during my visit, I was determined to not let it deter me from moving about and making my way to (and around) a whole host of different destinations that I had on my "want to visit" list.

At the same time, I decided that I wasn't going to over-rush things and would allow myself to dally in a particular nice place if I came across locales where this was worth doing.  Thus it was that on the second full day of my recent Japan trip, I ended up spending the bulk of the afternoon strolling around the beautiful Sankeien Garden in Yokohama.

For those who're wondering: yes, I did take plenty of photos of its landscapes -- and my next planned blog entry will feature a selection of those images.  But as I walked along the 170,000 square meter park's paths, I automatically went into the observational mode that I go into while out hiking: i.e., one that involved my scanning for intriguing-looking critters as well as generally enjoying larger views and vistas!

Perhaps not too surprisingly, the bulk of the bugs I spotted while doing such as strolling about gardens and park areas in Japan were of the same types -- e.g., butterflies, spiders and dragonflies -- as those I commonly see in Hong Kong.  However, the majority of the species of the bugs I caught sight of in Japan were unlike any I had cast my eyes on in Hong Kong.  In addition, I've not heard the sounds made by cicadas as regularly in Hong Kong as I did in Japan on this most recent trip there.

Funny but true: I think that after this recent vacation, when I hear the sounds of cicadas, I'll get to thinking of Japan.  Actually, it may not be that funny-weird -- because upon Googling "cicadas + Japan", I found articles and blog entries with titles like Japan's cicadas -- loud enough to split rocks and thus have come to realize that cicadas are strongly associated with summer in that country! ;b
Posted by YTSL at 10:31 PM

That was indeed cool post! Indeed a great feature although I am not a fan of spiders. Nice share.

Thanks for reading and commenting. I'm not quite sure why shed sellers seem to be suddenly visiting and commenting on my blog but in all honesty, if you're here because you like what you see fine and if you're here for free advertising, please note that I really doubt that many of my readers are on the look out for sheds, cheap or otherwise!