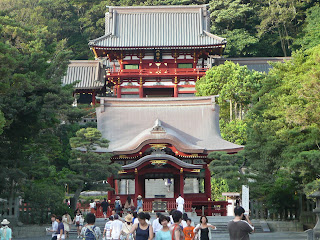 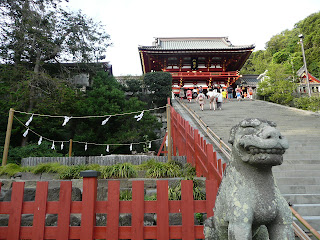 Gone but not forgotten: a large gingko tree that
predated the shrine stood in the area delineated
by the roped off circle -- until March 2010


On my first trip to Kamakura (back in September of last year), I visited five temples and shrines over the course of a single day.  Although that may not sound like much to some people, I have to admit that it all threatened to be a bit too much for me -- with one consequence being that I wasn't able to appreciate my visit to the Tsurugaoka Hachimangu shrine that's considered to be the most important of all of the town's shrines as much as I would have liked.

Although I actually hadn't planned to re-visit the Tsurugaoka Hachimangu shrine, its central location meant that I ended up walking by it twice on my trip last month to the coastal town that's located some 50 kilometers southwest of Tokyo.  And what with its opening hours being longer than many of Kamakura's other shrines and temples, it once again ended up being the final religious establishment in whose grounds I spent time on a day trip to "the Kyoto of Eastern Japan".

This time around, my impressions of this very popular Kamkura spot compared very favorably with the other places I went to that day.  One reason is that, on an aesthetic level, its buildings have a noticeably brighter color scheme than the other religious establishments I went to that day (including Eastern Kamakura's Hokokuji and Sugimoto-dera).


A second reason for my more positive reaction on this second visit is because I had re-read and remembered stories associated with the shrine -- such as that which involved Lady Shizuka being forced to dance on the Tsurugaoka Hachimangu shrine's ritual dance stage for the shogun, and an assassination of another shogun by his nephew who hid behind the gingko tree that had stood for centuries next to the flight of stairs up to shrine's main hall.  All of which goes to show that knowledge really can enrich one's experience -- along with a (relatively) less tired pair of eyes! ;b
Posted by YTSL at 11:42 PM