Tora-san, Yagiri no Watashi and more in Shibamata 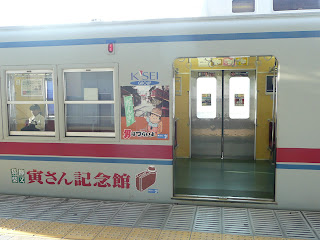 The image on the train tells you that it's taking you
into Tora-san territory :) 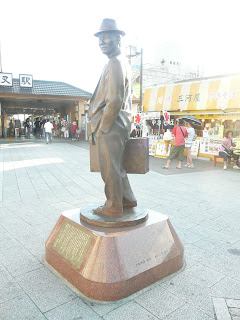 Further proof, if needed, that Shibamata is proud
of its association with the comic celluloid character 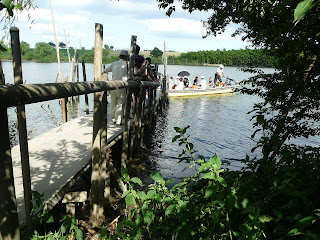 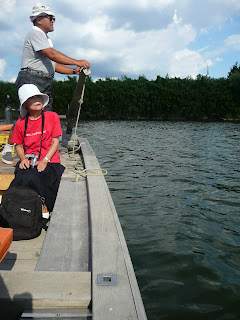 The ride on Tokyo's sole remaining human-powered ferry
lasted only a few minutes but felt like it transported
me to an earlier, simpler and more peaceful time

Before anything else: my thanks to A Hero Never Dies for organizing a "top ten favorite Hong Kong movies" poll, inviting me to submit my list and then beautifully illustrating my selection with choice images (as well as writing very nice things about my blog).  To those who are visiting by way of the link from that blog entry: welcome -- and do please feel free to look around for more Hong Kong (movie) specific entries.

However, this entry is going to focus more on some of the things I saw and did on my most recent vacation to the land which is home to my second favorite national cinema. And for those who were wondering: yes, I went and holidayed in Japan for the third time in a year!  More specifically, I returned to the Tokyo area after also rendezvousing in Okinawa with two friends in January of this year.

On the afternoon of the first full day of my week-long visit, I paid a visit to the "Edo-style" neighborhood of Shibamata out in northeast Tokyo. Described by a Tokyo-based blogger as "Asakusa only without the insane crowds", it is indeed home to an impressive temple (the Shibamata Taisahakuten) and a street leading up to it that's lined with shops selling tempting bites and interesting trinkets. At the same time, the distinct impression I got is that Shibamata looms in the imagination of its (predominantly local Japanese) visitors largely because of the great Yoji Yamada's 48 film Otoko wa Tsurai yo (It's Tough Being a Man) series whose main character is a comic anti-heroic travelling salesman who calls Shibamata home.

Although I have enjoyed the handful of Tora-san films that I've seen, I must admit to having eschewed a visit to the Tora-san Museum in Shibamata.  And while I did check out the Shibamata Taishakuten (and bathed and scrubbed the statue of the protective deity in its grounds -- in the hope that doing so will help ease one's physical ailments!) and also did go look around Yamamato-tei, a private residence built during the late Taisho Era (1912-1926) that harmoniously combines Western and Japanese architectural elements, the area's main draw for me really was the Yagiri no Watashi that has been celebrated in song (and sung by Teresa Teng, among others) and also written about in a novel.

Those whose image of Tokyo is along the lines of a Blade Runner-type futuristic metropolis might find it hard to believe but there really are sections of the Japanese capital city that are on the retro, and even bucolic, side -- and yes, they are among the very sections that I find interesting and checking out.  In the case of Yagiri no Watashi, what we have here is Tokyo's last remaining human-powered ferry ride -- one that first began operations close to 400 years ago and was long the primary way to get across this particular section of the Edogawa (Edo River).

Granted that these days, the ferry's main riders are (domestic) tourists rather than farmers like in previous centuries.  And it's also true enough that the ferry ride is on the short side.  But there really is something very attractive about the experience.  Maybe it's because I generally enjoy being out on a ferry boat -- be it out on Victoria Harbour, the Edogawa or elsewhere altogether. But the special touch to the Yagiri no Watashi ride was how quiet and peaceful it was -- and how during it, the imagination could so easily be free to fly and soar!

All in all, my feeling is that the ferry ride, and also the trip to and from Shibamata itself from the more central parts of Tokyo where I had been earlier in the day and would return to, well illustrate the idea that the journey is part of the experience.  And they are indeed the kind of experiences I look back on several days after the end of a vacation and find myself treasuring as being part of a wonderful time had in a country that really is a delight to visit.
Posted by YTSL at 12:31 PM