100 Must-See Hong Kong Movies - How many have you seen? 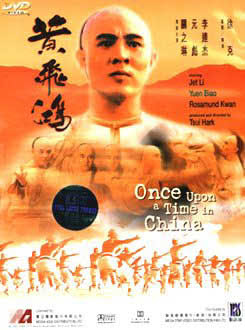 One of the 100 "Must See" Hong Kong Movies
according to the Hong Kong Film Archive experts
(and, for what it's worth, me too! ;b)
A few months ago, the Hong Kong Film Archive announced a screening program of 100 Must See Hong Kong Movies (that will go on through 2014 according to an official spokeswoman). Upon looking at the list compiled by six people (Hong Kong cinema experts, for sure, but still just six of them!), this Hong Kong film fan could not help but be shocked to discover that certain movies she considers great are missing as well as raise her eyebrows upon noticing the inclusion of other movies she doesn't consider all that wonderful.

Granted that it turns out that this list actually specifically only covers the years 1916 to 1999 (hence the exclusion of such cinematic gems as Toe Yuen's My Life as McDull (2001), Andrew Lau and Alan Mak's Infernal Affairs (2002), and Ann Hui's The Way We Are (2008)). But two of my favorite films of all time -- in the form of Peking Opera Blues (1986) and Peter Chan's He's a Woman, She's a Man (1994) -- are missing as well as a number of other movies I would put in my Hong Kong cinema pantheon!

Rather than quibble and gripe some more about it all, however, I'm going to invite the (Hong Kong) film fans among this blog's readers to consider doing -- on their own blogs or in this entry's comments thread -- what I've done on this entry: i.e., bold the titles of the films that you've seen on the Hong Kong Film Archive's list. (And no, I'm not challenging for bragging rights. Rather, I just thought it'd be interesting to see what one has seen -- and not -- to date of the works that acknowledged experts consider "must see" films originating from my favorite cinematic territory!)

And if anyone's counting, the total's a rather respectable -- I reckon -- 60 1/3 (since Family is counted as merely one third on account of it being one part of a film trilogy) for me! ;b

I think I've only seen 3 of the movies from the list. (Once Upon A Time In China, Fong Sai Yuk, Drunken Master.) I have a copy of Swordsman II, but I think I only saw the first one.

I'd love to see your version of this list, YTSL! And maybe without the constraint that the movies were made before 2000. Even more, I'd love to see a list of your top 10 or top 20. That way I could aspire to see them. (Because when would I find time to watch 100 movies?)

I have seen 33 of the movies on the list and while I will see a few more not that many will make it to the top of the stack.

Since part of my real introduction to Hong Kong movies came from YTSL's reviews on "Hong Kong Cinema: View from Brooklyn Bridge" I would value a list by her more than the six experts at HKFA.

Interesting that all 3 of the movies on the list that you've seen are action films. Re "Swordsman II": hope you have the one in which the main character's name is translated as "Asia the Invincible" in the English subtitles (rather than "Invincible Dawn")!

As for a top 10 list: I wrote the following one years ago and it needs updating but it's a good start:-
http://brns.com/top10/top1.html

33's not bad at all -- especially since I get the feeling that you're restricted to seeing works that are available on home video with English subtitles!

And *blush* re your high valuation of my recommendations... so much so that you are indeed tempting me to come up with a 100 "Must See" Hong Kong movies list of my own at some point. :)

30 for me YTSL, I'd like to be able to see more, particularly of the older films. Of the more recent ones I haven't seen, they're ones I'm not that interested in seeing. I too would love to see an updated list of your picks.

I think I've seen about 35 of the films on the list.

Here, Here! Like alejna and ewaffle I too would like to see a list of your top 100 films. They would have more meaning for me as part/most of my introduction to Hong Kong movies was your reviews on "Hong Kong Cinema: View from Brooklyn Bridge". And I'll bet ewaffle and my viewing numbers will be higher on your list.

Hi YTSL! You and I are just about even. The big gap for me are the pre-60s films, although I have been fortunate to catch a few of them at HKFA screenings.

But otherwise our viewing overlaps quite a bit, with a little more emphasis on my end towards films from the 60s.

These kind of committee-generated lists are always a little lackluster because they lack the odd favorites that make a personal list so interesting.

And I must also confess that I too used your reviews at View from the Brooklyn Bridge as a kind of check list when I was first exploring HK cinema.

Whoa you sure know lots about movies! I can't even recall if I have watched any of those listed :)

"Of the more recent ones I haven't seen, they're ones I'm not that interested in seeing."

Can you name a few of those? In any case, what puts you off them -- the genre, a particular director, actor or actress?

"I'll bet ewaffle and my viewing numbers will be higher on your list".

Hehe -- that's an interesting thought! And okay, I will think of my list... just give me some time, okay? ;b

Have to say that I'm surprised that there are so many films from the 1950s on the list -- more than any other decade, actually. Someone at the Hong Kong Film Archive seems to be quite the major fan of Union Films...

Re "Boat People": I guess it's one of those films I somehow have never got to seeing.

"An Autumn's Tale", OTOH, I've sort of avoided because I'm not a big fan of romantic dramas and I also have found that I generally don't like Hong Kong films with an overseas -- especially Western -- component.

Re "Autumn Moon": I feel like kicking myself over that. It was one of the few Hong Kong dramas that was available at my regular -- as opposed to Chinatown -- Philadelphia video rental store. I guess I just never got to it and now I don't find it all that easily available. Ah well, will just have to catch a screening of it at the Hong Kong Film Archive some time! ;b

No way you haven't seen ANY of these movies so guess it's just that you can't recall! ;b

The two I was thinking of in particular were Autumn tale and C'est La Vie, Mon Cherie, this is purely based on genre. I'd like to see Made in Hong Kong but can't seem to find it anywhere.

As you know, I've thus far steered clear of "An Autumn's Tale" too. But if you love Hong Kong, you simply have to watch "C'est la Vie, Mon Cherie" -- it's one of those movies I often have in my mind (and feel like I'm in) when I walk around Hong Kong, particularly the Yau Ma Tei area.

While most of the HK movies I have seen have been on home video with subtitles (including almost all of the 434 I have reviewed on the HKMDB) there are a few watched without either subtitles or dubbing, generally to an error in an order (mine) on discs purchased from HK vendors.

Sigh re the chop sockies. It used to upset me quite a bit when I was living in the US and whenever I told someone I loved Hong Kong movies, find that those movies -- and my movie passion -- often were dismissed as (a love of) chop sockies.

At the same time, it does seem that those works -- however badly edited, dubbed, etc. -- did turn on quite a few people to Hong Kong cinema... including people who then were able to make the jump to enjoying "real" Hong Kong films. And that can't be all that bad, I guess.

One thing that puzzled me in the list is that A Touch of Zen is considered a Hong Kong film. I wonder why that is.. It is just that it never felt like a Hong Kong film to me (and it is not only one of my all time fave films, it is actually one I consider a masterpiece of cinema)

Re "A Touch of Zen": well, its director is King Hu -- who's considered a doyen of Hong Kong cinema -- and Roy Chiao is in the cast... I know what you mean though about it feeling less of a Hong Kong film than something else.

(BTW, thanks for making me re-consider leaving out "A Touch of Zen" from my own 100 must-see Hong Kong movies list. I had initially thought of having "Come Drink with Me" there instead of it but, after further thought, changed my mind!)