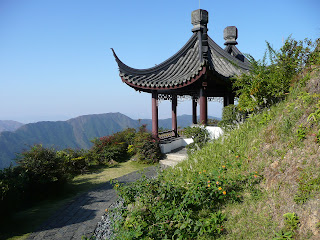 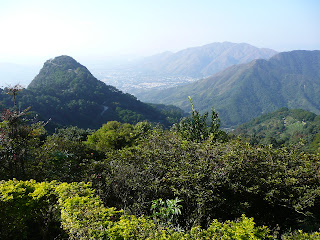 View of Kwun Yam Shan (elevation 552 meters)
and the surrounding countryside from the
Kadoorie Brothers' Memorial Pavilion
In a week when Beijing has been covered with "fog" (or, more probably, smog), here's going ahead and offering up visual proof that: a) the bad visibility currently affecting the capital city fortunately isn't to be found everywhere in China; and b) Hong Kong really does have some beautiful blue sky days -- and in the cooler, not just summer, months to boot. (N.B. the whiter bits in the second photo actually are the result of glare from the sun rather than gray bits of pollution.)

On a personal note: It was lovely to breathe in air that felt fresh as my two hiking companions and I headed up Kwun Yam Sham (whose height is given as 546 meters -- rather than 552 meters like Victoria Peak, as is the case on the Kadoorie Farm and Botanic Garden's official map -- in this Wikipedia entry on Hong Kong's highest mountains, peaks and hills) on foot -- rather than shuttle bus, as many are apt to do -- and then further up to the memorial pavilion erected in honor of the facilities' two founder-benefactors that stands as high above sea level as Hong Kong's 18th highest mountain, Kowloon Peak (AKA Fei Ngo Shan) last Sunday.

On a personal fitness note: around this time last year, I had a health scare -- and actually ended up taking one month off from work as a result. These days though, I'm feeling in better shape -- and consider it a positive sign indeed that the afternoon's exertions actually left me feeling more rejuvenated than tired. Indeed, I'll take it as a genuinely good indicator that as I hiked up to those two upper reaches of Kadoorie Farm and Botanic Garden (the upper portion of which is dedicated to conservation more than actually used for farming these days), the most pain I felt came from breathing significant amounts of cold air into my lungs pretty quickly -- that is, the kind of pain that doesn't last for long and also doesn't seem to do much harm at all, touch wood!

Put another way: I reckon that all the hiking I've been doing has done me a world of good -- physically as well as mentally. So lest there be any doubt, I truly do recommend this activity to people -- to boost fitness as well as generally have a fun time outdoors in the company of friends -- and am ever so grateful that Hong Kong has as many cool places to hike about and to as it does. :)

I am so glad that you are in good health, especially after that scare you had last year, thanks for the update.

Sounds like a great place to hike! And I agree fresh air and exercise can do a world of good for health. Happy you are feeling good!

Hiking, walking, whatever you call it, I always feel great after I do it. Love this post.

Such beautiful places you have for hiking. I always feel better when I can get moving and agree so much about it helping mentally and physically.

You're welcome re the update -- and good to hear from you again. :)

Hong Kong really is a great place to hike -- and unlikely as it may seem, Kadoorie Farm and Botanic Garden really does have its share of cool uphill hikes. :)

I'm glad you like this best. Was wondering if it was too "me" oriented -- but I wanted to share the photos and the joy of feeling in good health! :)

I like moving and getting adrenaline -- and even more so when doing it in scenic surroundings. :)

That looks like a wonderful place to walk. I really must get back into hiking, it is very rejuvenating as you said.

Thanks for visiting this weekend despite my not doing Photo Hunt. Re hiking: I've got nice memories of doing so in the UK -- though there we talked more about rambling and such. :)

Such beautiful places you have for hiking. I always feel better when I can get moving and agree so much about it helping mentally and physically.

Thanks for your comment. BTW, notice that your link leads to a commercial site -- but since your comment does pertain to the post subject, am going to let it stand. :)