Old and new in Penang 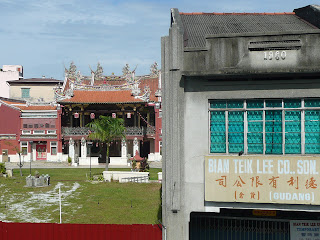 View in George Town that takes in a clan house as well as
a newer (i.e., dating back only to 1960) building 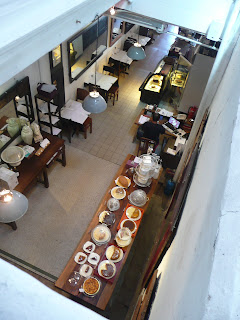 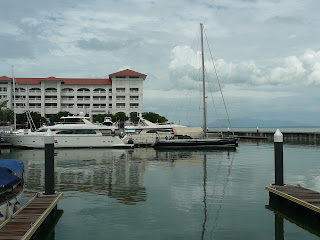 View that takes in part of the marina at Straits Quay
out in the Sri Tanjung Pinang section of Penang
This time last week, I was back in my nominal home state of Penang. Over the course of my flying visit (which totaled just five days even if one were to count the days that I flew into and out of the place), I revisited old haunts but also checked out parts of the territory that I had hitherto not ventured into -- not least because at least one of them had not yet opened when I last visited in September and the other also had not existed the last time I actually lived in that part of the world.

When I was a child, we had family friends visit from Singapore annually. On each of their visits, at least one of them would remark that it seemed like Penang never changed even while Singapore was rapidly changing (and -- it went unspoken but nonetheless was clearly implied -- getting more and more developed).

In the years and decades that have passed since then, there is no doubt that Penang too has changed and developed. Among other things, where previously we would pass by paddy fields on the way to and from the airport, there now is a not so new satellite town and free trade zone that is home to miles and miles of factories and whereas in my youth, trishaws often had schoolchildren (including myself) as passengers, these days one is far more likely to find tourists seated in their carriages.

Ironically, in recent years, it seems that a lot of change has actually come in the wake -- and, indeed, as a result -- of George Town having been inscribed (together with Malacca) onto UNESCO's World Heritage List in 2008 (i.e., one year after I moved to Hong Kong). And it really is the case that each time I've gone back to Penang this year, I feel like I'm seeing more and more signs and indicators that Penang -- particularly the historic inner city area of George Town -- is attracting more tourists and also having an increased number of facilities that cater to tourists but are reaping cultural as well as economic dividends for the locals too.

As an example, the China House cafe, restaurant and art gallery may have been established by non-native Penangites with an eye to attractive international visitors but when a Penangite friend and I went there for breakfast last Sunday, it seemed like all of the clientele present at the time were locals. And while Straits Quay had a vibe that made it feel --as I remarked to the person who took me there and whom I hung out in an Irish(!) bar with there for a couple of hours -- like I wasn't actually in Penang, its clientele also consisted of locals as well as (obvious) foreigners.

In any event, these two places look like nice and cool additions to the Penang landscape. Still, I definitely do hope that much of Penang's older sections will escape the wrecker's ball for a time to come and also not get renovated beyond recognition -- something that, touch wood, George Town's UNESCO world heritage listing will help ensure, together with a greater general appreciation by local people and the government of its cultural and historical attractions and attributes.

oh thx for introducing the china house! looks like such a nice place to hang out! will check out soon! ;)

Oh, you didn't know about it yet? Guess it *is* pretty new. Hope you enjoy hanging out there. :)

Nice to read about a place I've been to, even if it was a long time ago. I have happy memories and who knows, I may just come back again!

I wonder whether if you return to Penang you'll feel it has changed since your first visit. Have a feeling that will indeed be the case -- even while a lot of your favorite places should still be around. :)