From Lin Fa Shan down to Tsuen Wan (photo-essay)

For those who wondered: I'm okay, thanks. It's just that I was busier than usual this past weekend -- having a full day of work on Saturday, among other things -- as well as was away from Hong Kong between Friday and most of yesterday. And then when I got back yesterday, I was so tired that I called it a day several hours earlier than usual; so delayed putting up a new blog entry today...

But now I'm back on line and blogging again... so here's putting up another photo-essay that covers the hike I went on that took me from the Twisk Management Centre to Lin Fa Shan... and further along via the Yuen Tuen Ancient Trail down to Ha Fa Shan, from where my regular hiking companion and I descended a large number of stairs to Allway Gardens, one of Tsuen Wan's earliest and largest private housing estates.

Alternatively put: this hike through Tai Lam Country Park ended on the edge of a super busy market town -- conveniently all right yet posing a shock of sorts to the psyche by way of hammering home that one really wasn't all that far away from crowds of humanity after all even though it might have felt that way for much of the afternoon's excursion! ;b 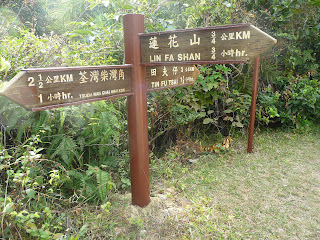 As one of these signs shows, the ruins of the
abandoned school at Lin Fa Shan are just around
2 1/2 kilometers away from the outskirts of Tsuen Wan... 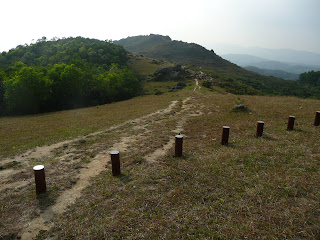 ...yet in this hilly countryside, one also would be
right in presuming that there are acres of
uninhabited countryside nearby and about the area 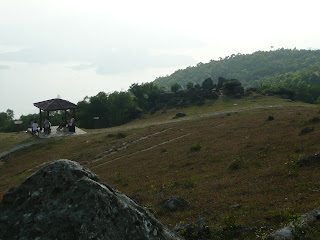 Admittedly, the views from Shek Lung Kong could have been
clearer when we visited but, if truth be told, it still was
pretty splendid -- seeing as it was one of those days where
the human eye could see more than the camera capture well 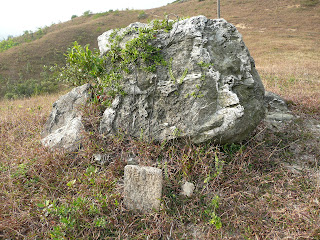 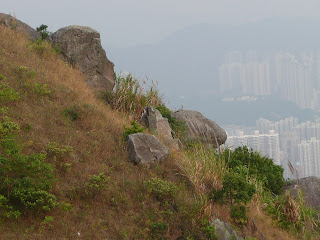 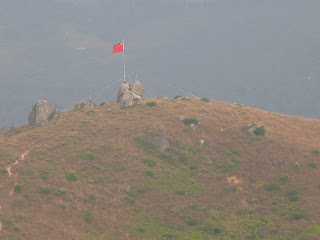 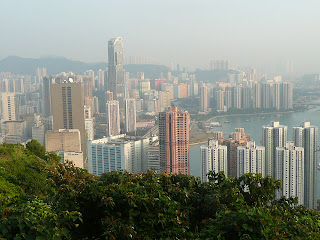 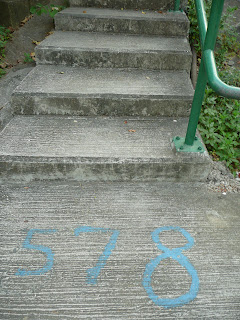 As someone kindly wrote down at the bottom of the
flight of stairs leading from Allway Gardens up to near
the official start of the Yuen Tsuen Country Trail, there are
578 steps to climb to get up there -- and for the record,
I have ascended as well as descended those 578 steps! :)

This photo (https://2.bp.blogspot.com/-npoqzqJfJpM/Tui8bdEuZwI/AAAAAAAAJzI/fjh1yJFytDs/s1600/P1090470.JPG) showed a marker alright. The engraving could bearly be read. But the two characters aligned vertically at the bottom appeared to be 后土. If this is the case, it would seem to be a boundary marker of a grave or a tomb close by.

These are quite common in the New Territories.

I wondered whether the marker was for a grave. A tomb would be interesting!

If you were standing before and facing the stone marker, the respective grave should be a bit behind you. Usually. From my observation these markers usually come in pairs.

I don't know much about these markers except they are usually around graves. If you have friends well read into the Feng Shui discipline, you might as well ask them.

I did find at least one grave on that hill. Sometimes it really can feel like grave spottings are an inevitable part of hiking in Hong Kong!

The Lands Department would usually mark country side graves during their surveys. Previously the Geoinfo Map (http://www2.map.gov.hk/gih3/view/index.jsp) would show such graves with a G in their on-line maps. But they seemed to have disappeared very recently.

But I found these G markers on a Government Mobile App called HKGeology. I know you do not have any smartphone or tablets, but if someday, while you are still in town when you decided to own one, you might like to take a look of the HKGeology App (http://www.cedd.gov.hk/eng/mobileapp/)

Despite the mobile app nature, the maps within is actually old school topographical maps with contours. Quite useful sometimes.

Most times, it seems, one doesn't need maps to locate/spot graves in the Hong Kong countryside. In my case, I'm not out to specifically look out for them. But it's true enough the old ones do fascinate me, as do the elaborate newer ones. :b

I have to admit I have been putting the HKGeology app into misuse for at least half a year. It was meant to be a map showing the Geology, rock formation in town but I keep on using the contour map for other purpose like researching Hiking routes, buildings, streets or locating ruins.

Believe it or not, the maps is already updated to show the MTR South Island Line.

Teehee re yur "misusing"the HKGeology app. Just wondering: do you have hard copies of the Survey and Lands Department countryside maps? I (still) am of the opinion that they're a "must" to have with you when hiking in Hong Kong!

That, I do have a full set. They are not of the most up to date versions though. All in my hiking backpack.

Good for you! Must say that it does concern me that lots of new hikers seem to think that Google Maps, etc. suffices without realizing that there are lots of places in Hong Kong that don't have phone reception, etc.!

Referring to phone network reception, that was why I always carry a spare phone using a China Mobile prepaid 2G SIM card. This way at least I would have one usable phone for voice communication when needed. This SIM card would usually work (except I was deep in a valley or blocked by ridge) under roaming where my other CSL\PCCW Sim didn't.

The issues for kids and young adults in town today is that many of them neglected the need of how to use a compass and have the knowledge of basic map reading. Some of they rely of their smartphone with GPS for guidance but that doesn't always work, especially if they did not have basic hiking training before. Some of them neglected other things like bring along sufficient water and snacks, wearing inappropriate attire, footwear, etc.

I would usually bring along my handheld GPS unit while hiking, but I only use it for track logging instead of navigation. You'd probably read about drivers driving their vehicles into the water by blindly following the GPS Navigation? I'd rather trust my own eyesight and paper map instead of a computer while I am out there.

You sound well-equipped when out hiking! I agree re many neophyte hikers in Hong Kong not being sufficiently prepared when heading out into the countryside. As I've often commented to friends, it seems like those people don't realize how wild Hong Kong's countryside really can be and, instead, think that a hike in a country park won't be too different from a walk in an urban one!

I had had sort of a heat stroke scare when I took up hiking again some 13 years ago. Since that silly incident I'd always bring lots of water and sufficient snacks with me. On hot days I would usually carry at least six litres of water with me. Just another reason I tend to go on a steady but slower speed.

Wow, six liters! I think I would injure my back if I carried as much water with me while out hiking! So it's probably just as well that the hikes I go on are easier and shorter than the ones it sounds like you still go on from time to time! ;b

My 36L hiking day pack are usually just about half full even with all the water. I have a 3L water bag. The rest are bottled water. Plus my maps, batteries, and other gears, I guess my usual hiking burden would be around 10-14 Kg. But water would always be depreciating so it would get lighter in the long run. If I still do wild camping I think it would probably double up, and then some.

Thankfully the backpack I'm still using could distribute the burden evenly to my waist. Yes, I tend to do 7-10 hour hikes a bit more. But I do shorter hikes (say four hour ones) from time to time.

I tend to go on 3-5 hour hikes rather than longer ones here in Hong Kong. The longest I've hiked time-wise is probably around 6.5 hours. That's happened about three times and each time, I took longer than expected because the terrain was so beautiful that I ended up spending far more time stopping to take photos and just enjoying the scenery than I should have... ;b