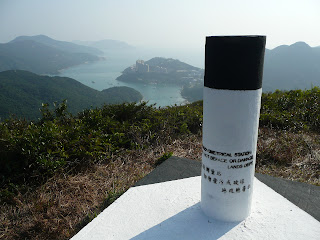 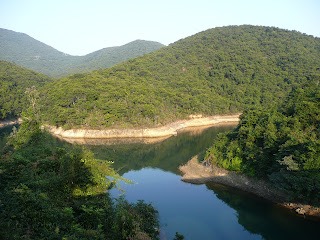 View from later along the same hike that includes
Boa Vista (i.e., the hill on the right in the background
of the photo), from a bridge over Tai Tam Tuk Reservoir

In my final years in the US, I would regularly fly over to Los Angeles to spend the Christmas holidays with a good friend -- whom I got to know through our mutual admiration of Michelle Yeoh -- and her family. As might be expected when one's hostess is the webmaster of the Michelle Yeoh Web Theatre, we'd spend a number of hours of our vacation time re-watching movies starring Michelle Yeoh together. At the same time, it became like a yearly ritual for her, her family and I to go on at least one hike together each time I visited.

The first year, we hiked in the mountains east of Santa Barbara. Another year, we did a hike in the Mojave Desert. Another time, we trekked around the memorably named Devil's Punchbowl. In addition, there was the year that we hiked up so high up the mountains overlooking Los Angeles that we were wading through snow several inches deep for part of the way! So you could say that, for a time there, I was getting boa vista aplenty during the Christmas period.

Although I've gone on my share of hikes since moving to Hong Kong, today was actually the first time since moving to the Big Lychee that I went hiking on Christmas day. For much of the week, I was thinking this would not happen -- since I've been nursing a nasty cold. Fortunately, I started feeling good enough to contemplate hiking yesterday -- so made plans with three friends to go on a hike through Tai Tam Country Park on what turned out to be a pretty pleasant day weather-wise (i.e., not as cold as had been forecasted but with air that felt fresh as well as crisp).

I had actually gone on the route I chose for today before with my regular hiking companion -- but it really is a pleasant enough one that I really didn't mind going along it again. Also, I had rued that we missed a turn off the previous time to the top of Boa Vista hill where, as promised in Alicia M. Kershaw and Ginger Thrash's Above the City: Hiking Hong Kong Island book, "a trigonometric station and a view bonanza" were to be found. So this time around, we looked more carefully for that turn off and, after finding stairs that went down (rather than up as expected) and led to an overgrown trail leading up to the top of the hill, were rewarded with truly good vistas up on Boa Vista.

I have to say that being up on Boa Vista represented the highlight of the day's hike for me. At the same time, I also feel that the whole hike in general was a really enjoyable one -- and a pretty good way to spend the bulk of Christmas day -- not least because of the company on it. (And for those who wonder, I truly am not sure which is better: hanging out with friends over a meal or by going on a nice hike in scenic countryside -- and yes, I feel lucky indeed that I get to do both here regularly in Hong Kong! :b)
Posted by YTSL at 9:38 PM

Sounds like you had a fun Christmas Day. When I read the title my initial reaction was "She's in Brazil for Christmas!" as I once had a student from there.

Yes, I did have a fun Christmas Day -- and hope you do too. Teehee re your initial reaction to the entry's title -- and it is rather surprising, isn't it, that a hill in Hong Kong would have such a Portuguese name? ;b

What a great way to spend Christmas day! Looks like your weather was a lot better than ours :)

Yeah, we were lucky here with our Christmas weather. The bonus was how the skies were blue on Sunday -- seeing as they were on the dirty gray side earlier on in the week. :)

I spent my Christmas enjoying my X'mas gift - a new Holga pinhole lens! I went to a temple to try it out and I totally enjoyed it :)

Don't know if you've noticed by sbk (of Pictures, Thoughts and Comments) is quite the Holga fan/expert -- with lots of photos taken with a Holga on view at her blog(s). :b