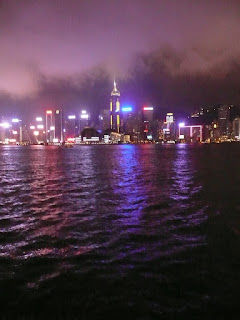 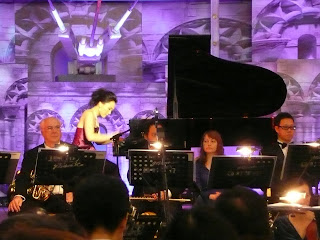 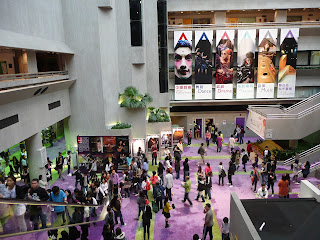 After a few weeks of Photo Hunt themes that I have found on the difficult side (and I know I'm not alone in this because of such as Carver's comments on my Photo Hunt entry last week), there has come one for which I have a plethora of photos and creative options.

One of these was to illustrate the purple theme by looking to nature and offering up some photos of beautiful wild flowers seen on hikes in Hong Kong (including one that took me up and down the appropriately named Violet Hill). But after hunting through my photo archive, I've opted for three photos that are more along the cultural side of the equation.

The first is one of many photos I can't find myself resisting taking while on the ferry crossing Victoria Harbour; one which I particularly like because it shows how red and blue bring about purple -- one of those unforgettable lessons learnt in art class as a kid.

The middle photo was taken at a free evening concert in the unlikely setting of the Tai Po Waterfront Park that included a range of performances including taiko drumming by students of the Tai Po-based Japanese International School and of excerpts from Vivaldi's The Four Seasons by the City Chamber Orchestra of Hong Kong.

And the third photo, taken when I was at the Hong Kong Academy for Performing Arts for a cultural performance, provides further evidence that Hong Kong is: a) not a cultural desert; b) definitely has its share of culture vultures; and c) seems to have a liking for the color purple in terms of artistic color scheme! ;b

Yes, I always consider the purple and green setting in the APA a brilliant idea.

wonderful captures for the theme!

Beautiful photo from the ferry YTSL. You are living the cultured life in HK from these photos.

What a glorious set of photos! Beautiful!

Purple and green don't sound like a great combo to me in theory -- but it does seem to work a treat at the HKAPA. :)

Yeah, I don't think I'll ever quite tire of the views that are to be had when crossing the harbour by ferry. :)

I've long been a bit of a culture vulture (in fact, I got that nickname decades ago at boarding school) -- so it's great to find that I can indulge those cultural tendencies here in Hong Kong. :)

Beautiful collection of photos! The view from the harbour is especially breathtaking!

what a perfect capture of that purple skyline--all great shots.

Love your cultural take on the purple theme. That first photo is stunning! Have a great weekend.

The first picture is stunning! Great choices for this week's theme.

A fascinating set of photos! Really love the deep deep colourings in the first photo!

I love the first shot. The floor looks strange to me. Nice, but still odd.

A lovely selection of photos for the purple theme! I really like the first...so pretty!

Hi YTSL.
Great shots you captured there. My favorite is the first photo. I love the HK harbour especially at night :D

These are all great and the first one totally blows me away. The purple sky reflected on the purple water is amazing. I also always enjoy your cultural ones.

We were alike this week too in that I had a lot of choices for purple. My problem was I started thinking about what is purple and what is violet and in retrospect I could have used some of my new shots that I was afraid were violet. Happy weekend!

love your different take on the theme. the first shot is amazing.

The photo of the harbor view I took doesn't do it justice. But am glad that you got something out of it. :)

Am glad you like my cultural take on the theme. :)

Guess you like deep purple... what about Deep Purple? ;b

Is the purple with yellow stripes a bit too psychedelic for you -- especially for a cultural venue? ;b

Am glad you approve of the selection. :)

Welcome (back) to Photo Hunting. :)

Seems we really do think alike! One reason I didn't go with the flower approach for this week's Photo Hunt was because I got to wondering whether some of the flowers I considered purple really were that color (or something else)! ;O

Seems like the first shot is the clear winner in the popularity contest thus far! ;)

Thanks -- and yes, I definitely intend to enjoy the weekend. I live for the weekend! :D

Wow!! That first picture is stunning! And you say that effect happens all the time?

I love how the sky turns purple at dusk, and you have captured it beautifully.

That night shot is superb, love all your purple choices!
purple!

So many beautiful and creative purples.

Great shots and my favorite is the first one. I like the color of the water reflection. Happy weekend!

Your reactions have reminded me how unusual(ly beautiful) something I've come to take if not exactly for granted, than as normal is. :)

That first photo wasn't taken at dusk... ;b

You're more correct -- it is indeed a night shot! :b

Am glad you like the purple range I put up. :)

You two are most certainly not alone in liking that first photo best, it seems. :)

Hihi just to say that's an amazing photo - and hi from someone who went to CGL in Penang :) (I was born in PJ and spent 8 years in Sandakan though)

And yes I do think it's an amazing photo. Cos I usually take pictures with hp and just hang up the camera at night cos I think it's very difficult to take pics at night

(And yeah, I agree that it's difficult to take photos at night. ;b)

Oops Major Blunder. WHY did I think you were born in 1978 and therefore 2yrs my junior in CGL secondary?? I left CGL secondary 1993. d-uh d-uh sorry

Eeeeeeeeee... from thinking I was much younger than you, I now realize I'm quite a bit older! :S

So... was Sister Aidan still headmistress when you were at CGL???

No... missed her totally... And from what I hear CGL became less and less convent-like between your and my years.. also less emphasis on girl guides and more on kadet polis (tho of course the guides still quite active), stuff like that

Heard the same about CGL becoming less convent (school) like over the years. FWIW though, the police cadets were *the* uniformed society when I was there too (though I rebelled and didn't join any group with uniforms other than sports teams! ;b)

Ohh i didn't know police cadets was popular then... i did join for a year but other than that did sports outside CGL... wud u believe I went to Hamid Khan to train!

Funny how this Photo Hunt thread has become a nostalgic CGL one... ;b

yeah sorry it's like totally out of topic :S

No worries. Not upset but amused, actually! :D

Lovely choices for the theme.

I like the night shot of the harbour. It looks romantic. :)

I'm a little late - Three great choices. The concert looks like it was great fun - outdoors and free! It can be amazing where purple will show up in daily life. We often don't realize it until we look a little closer.

Better late than never! :b