Another Day in Movie Mecca 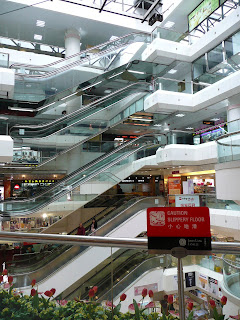 A mall made special by its being the location
of a most exciting movie scene
For much of this week, I had been looking forward to spending today at the beach but, alas, the weather proved to be most uncooperative. Still, rather than stew and sulk about this weekend having been been more rain- and thunderstorm-filled than I would have liked, I went ahead and made alternative plans to do such with friends as go and view Yoji Yamada's affecting About Her Brother (whose title recalls Kon Ichikawa's half century older Her Brother (1960) but whose eponymous male character brought to my mind Yamada's own Tora-San) and, on the way to dinner, realizing anew how one often is surrounded by so much that gets me recalling this or that movie here in Hong Kong.

As a further reminder -- to myself as well as others! -- of this state of affairs, here's putting up a photo I took some time back inside a now rather unfashionable and somewhat run-down shopping mall in Tsim Sha Tsui East -- one that most people wouldn't take a second look at, never mind think to enter. But if they are fans of Hong Kong cinema, then I'd wager that once they realize that Wing On Plaza is where the mall scene in Police Story (yes, that Police Story which saw Jackie Chan, Brigitte Lin Ching-Hsia and Maggie Cheung Man Yuk in action in the mall) took place, they'd understand why it's a place I thought worth visiting and even taking a photo of for posterity -- right?! ;b

The classic electric pole slide scene. Vintage JC before he started to get a bit...well, crap.

I wouldn't be surprised if the place got redeveloped soon because it is fairly shoddy inside and just seems to be filled with cheap naff tailor shops.

JC in his prime really was something, right? BTW, have you got a ticket to one of the upcoming screenings of "Project A 2"?

Have to confess I haven't yet -- but think I will soon. (And FWIW, already have a ticket for "He Ain't Heavy, He's My Father'!)

What's your idea of a day at the beach.....I thought you didn't like swimming and hehehe....I can't imagine you relaxing on a blanket on the sand...perhaps you'd walk along the shore and collect interesting looking shells.....

Yes, in his prime he (and his stuntmen) were great. But you really have to look at his 80's/early 90's output for his best films.

I doubt I will have time to go and see these screenings (with 3 kids I don't have time for anything at the mo) but PA II has some great set pieces - my favourite being when he kicks Chan Wai Man's character over a balcony onto a large vase - still one of my favourite stunts in any film and almost painful to watch.

I love walking on the beach (especially on beaches with clean, nice sand), gazing out to sea and taking photos of whatever catches my eye. And if the water's nice (clean, minus jellyfish, etc.), I like wading a bit in the water too. Sound good to you? ;b

But "Project A II" is indeed pretty good as well. So the more I think about it, the more I reckon I should make it to the Hong Kong Film Archive for one of its upcoming screenings. :)