Pretty much my final HKIFF 2009 entry 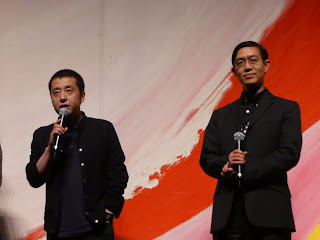 Jia Zhangke (and HKIFF artistic director Li Cheuk-to)
before the screening of the filmmaker's 24 City)
It's more than a month now since the opening films of the 33rd Hong Kong International Film Festival were screened. So even though a few retrospective programmes are still going on (including that featuring the films of Evan Yang, and another for Michelangelo Antonioni that includes his 1972 Cultural Revolution-era China documentary), it seems high time that I wrap up my reviewing of the films I viewed at this year's HKIFF. Therefore, here goes, for one last time this year...

How long does a community and country take to recover from a war, particularly a 'civil' one? For most of this film that is set in 1997 Bosnia in a Muslim village where the only males left are a physically lame religious elder and a psychologically traumatised boy, the answer seems to be "forever". This especially since the war has not only left families unintact and people missing and mourning loved ones but also looks to have blasted the community back several centuries in terms of technological capabilities and physical isolation.

Amidst it all though, there are females who clearly still continue to survive and eke out a living, and even one -- a young veiled widow called Alma (Zana Marjanovic) -- with entrepeneurial dreams to feed millions of others with the products of their agricultural and culinary labour. Soon after she is given high hopes by a meeting with a Muslim man who tells of having miraculously survived a massacre of his family however, a Serbian man pays a visit to the village with an offer that initially seems good but ends up threatening the unity of the community and even its outright demise.

Considering its historical and geographical setting, there was no way that Snow would be anything other than have a sad story to tell. But if you were to choose to view this work, what you'd also see is a film that is full of humanity along with sorrow. Additionally, besides confirming that war is often hardest on civilians and those who survive, it seems to send out a message too that ignorance is not bliss: that however painful it is to find out bad things about the fate of loved ones, knowing helps people to move on and go ahead with the business of living.

An uneasy mix of documentary and fiction, this work that "Sixth Generation" Mainland Chinese auteur Jia Zhangke was inspired to make after hearing of the impending demolition of a state-owned factory complex in favour of a new mega urban development may be generally impressive, yet show him up as trying to be too clever for his own good.

24 City begins with documentary footage and a veteran factory worker talking about his workplace and people he had worked alongside with over the years. The man is not completely comfortable in front of the camera and has a few verbal tics that can be somewhat distracting. At the same time, there is no doubt that a significant percentage of his time on screen is genuinely affecting as well as involving.

In stark contrast, the bulk of the film's biggest star's appearance rings so very false and only succeed in eliciting cheap laughs and bringing viewers out of the movie. And even while the other professional thespians in 24 City are less easily recognizable -- and consequently fare somewhat better -- than Joan Chen (who, ironically, put in a great performance in my favorite film of last year's HKIFF), it's startlingly easy to tell them apart from the 'real people' who appear in the work. (Among other things, they uniformly have far more even teeth than the others!)

To be sure, there actually were moments in the film -- bar for when Joan Chen was on screen -- when I was able to forget who was speaking and focus on what was being said. Still, I must admit to having come away from the screening rueing that the 2009 Hong Kong International Film Festival's official Closing Film hadn't entirely been a documentary; albeit while realizing that it probably would have been impossible to get real people to be so revealing to the camera -- and be as articulate in front of it -- as this effort's fictional characters (who, to be fair, did generally come across as having some basis in reality).

YTSL, I felt the same way as you did about 24 City. Evidently, Jia Zhangke decided to create composite fictionalized characters because of the erratic quality of his initial interviews. While this may have benefited the aesthetics of the film, I agree with you that it forfeited a good deal of truthfulness, not too mention the raw impact of witnessing real people talk about their experiences.

I also had the feeling that -- as much as I love Jia Zhangke's films and his project of documenting the recent social upheavals of China -- the subject is starting to become a little played out for me.

I'm not sure that I'm tired yet with watching cinematic documents of China's recent social upheavals. But have to say that I prefer either straight documentary or fiction feature a la those that I've seen from Iran. And, come to think about it, Ann Hui's two recent Tin Shui Wai works!