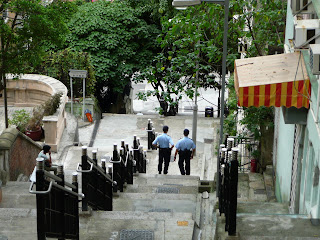 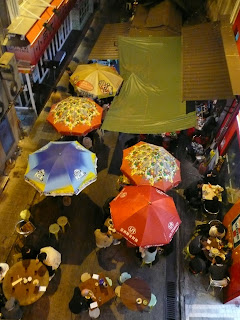 Two types of protection came to mind when mulling this week's Photo Hunt theme -- and while neither of them are unique to Hong Kong, both of them may well be especially prevalent in this part of the world.
The first of these comes in the form of the local police force: specifically, one that has a high 85% community confidence rating; many of whose members can be seen walking street beats in various parts of the often quite hilly territory during the day and night, come rain or shine.

And speaking of rain: this is a place whose denizens take rain very seriously. (For proof, check out these official rainstorm warnings as well as the umbrellas and awning set up to protect patrons and operators, respectively, of the dai pai dong (open-air food stall) in the second picture above).

Incidentally, for those who enjoyed my 33rd Hong Kong International Film Festival coverage, here's a movie-connection addendum/bonus of sorts: i.e., apart from the local constabulary prominently figuring in many a Hong Kong movie (think the various Police Story films, among others), I'm also pretty confident that this dai pai dong pictured above is: the one that Tony Leung Chiu-wai's cop character was eating at when he bumped into Faye Wong's lugging market produce in Chungking Express; and is adjacent to the one where Simon Yam and co ate at in Triangle... ;b

Two very good photos for protection YTSL. I never even thought about an umbrella.

Great post for this week! Have a great weekend. ;)

Excellent photos for this week's PH theme. Those things came to me also but I went with the more "Hawaii" type of protection..lol!
Stop by http://upcountrysmiles.com to see for yourself!!

Happy PhotoHunting to you!
Cindy O

Great shots and a good take on the theme. Happy weekend!

Umbrellas can be a three-way protection: from the rain, from the sun's heat and for poking someone (oops, too violent, hahaha)

Nice take for this week's theme. have a great weekend!

Your entries are pretty. happy weekend. Mine is also ready. Please visit mine too.

Good choices! We haven't had any real rain in so long, umbrellas never even came to mind!:-)


Hope you’ll stop by mine!

Great ideas for this weeks theme! Police and umbrellas are both good protections.

Nice photos. And great take on the theme. I thought it was a hard one this week. You did great!

Weather and human protections are two of the most important ones around. Nicely done YTSL. :)

Very nice interpretation of the theme ! I love these colored ombrellas !

If you've been "treated" to the rain Hong Kong has been getting recently, am sure you would have thought about umbrellas too! ;)

Guess we both went with territory-appropriate options! :)

Thanks, and happy weekend to you too! :)

Poking someone? Sounds like some people may need protecting from you! :D

Some rain is good, so hope you get some soon! ;b

Funny, for this actually was one of the easier Photo Hunts for me... ;)

Yes, sad it is how we sometimes need to be protected from other humans? :S

Thanks -- and yes, agree the colorfulness of the umbrellas. :)

Excellent choices for the theme! Have a great weekend

Good choices for this week's. And it sounds strange from here to learn that there are places where you could have too much rain ;-)

Excellent photos both and perfect for the theme. I really love the colors and perspective on the umbrella one! Very cool shot.

Great photos. That's amazing to hear about the 85% confidence rate in the police.

Why are they so insistent on protection against rain? Just don't like to be wet?

Yep you are right we did think alike!!

Thanks and too right re what you wrote re umbrellas! :)

Thanks and hope you have a good weekend too! :)

Yes, well... here in Hong Kong, it can rain so much that it floods in some areas and the day-time sky turn so dark it's like night has fallen!

Thanks for appreciating my photos. :)

Yeah, I figured that high confidence in rate would raise some eyebrows... but yeah, I really can believe it over here!

As for protection against rain: it can come down so suddenly and heavily here, that's why! ;b

Both are very good choices for the theme :)

Both perfect photos for this week YTSL!

May your weekend be safe, protected, and blessed!

We were thinking along the same lines!

Well, here I am, unable to stay away from the PhotoHunt any longer! :D I probably won't be a regular, but I'll be around.

Good types of protection, both. I didn't think in either of those two directions, and this in spite of torrential rain today.

You always have such interesting and colourful photos, and great information to go with them. Fine post, as usual.

Love the photos from Hong Kong

Very nice photos for the theme. I love the umbrellas and the angle of this shot.

Not completely... e.g., have seen a couple of other umbrellas while Photo Hunting this week, actually. ;S

Similar, yet not completely the same! ;b

Welcome back to Photo Hunting! Re rain: I'm afraid the rainy season has begun here -- so much so that I'm wondering when I'll get to go hiking again... :S

Thanks for the compliments and for regularly visiting. :)

Thanks -- and for the umbrellas shot: overhead bridges and, in this case, a hillside elevator system are wonderful for allowing such shots. :)

love the array of umbrellas!

Thanks -- to the dai pai dong owner for that! :b

It's romantic to sit under the umbrellas when the weather's fine but not when it's raining. :)

Haha, in either situation, I'd not find it romantic! Instead, atmospheric is more like it -- and that particular dai pai dong also has good lamb claypot in winter! ;b

One of the things I love about this blog is discovering things like that 85% of the population of Hong Kong have a favorable view of their police force. No urban police force in the US that I can think of would have an approval rating that high--or even half that high. Different situations, of course, with racial and ethnic animosity defining much of the way people in the US look at most institutions.

Having police officers walk beats instead of riding in cars must be part of it. Whatever the case, this is the kind of thing that I point out to my wife and others, including a friend who is married to a Detroit police officer--who was amazed.

In an odd way it is a good feeling to know that this kind of police/citizen rapport exists in any huge city.

In a completely unrelated note, Mr TANG King-shing, Commissioner of Police, looks like he could be the brother (or at least cousin) of Waise Lee.

You made my day by detailing what you love about my blog -- heck, my stating that you love it! :D

And yes, I think it really does help to see the police walking beats -- also in their being approachable enough so that, say, if you're feeling lost, you can feel okay to go up to them and ask for directions to a place. :)