Three films viewed at the 2009 HKIFF 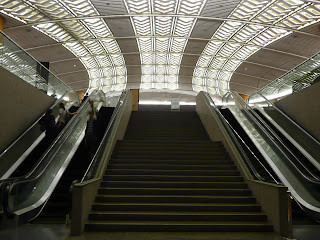 Stairway to movie heaven --
at least for the few days that the Hong Kong
Convention & Exhibition Centre was a Hong Kong
International Film Festival screening venue! ;)
Last night, I watched my 13th movie since this year's edition of the Hong Kong International Film Festival (HKIFF) began back on March 22nd. Tonight, I'm having a movie-less evening for what's only the second time since that date. What with my having had bought a couple more tickets to bring my total number up to 26, I've also reached the midway point in my personal film festing. So figure it's a good time to start writing about the first trio of movies I've viewed during this film feast of a period. With that thought in mind, here goes (in viewing order):-

Call me an optimist but I had high hopes for this crime drama about illegal Chinese immigrants in Japan that was being largely billed early on as a Derek Yee movie. Unfortunately, the spectre of Jackie Chan ended up looming too largely over this work. And while he did play against type and try to be a dramatic actor -- rather than action star -- for the most part, the plain fact of the matter is that I can see how this would easily have been a better film if it had a better (and younger -- to suit the part) actor in its lead role.

Worse still was the fact that Jackie Chan by no means turned in the most laughable performance in this work. Instead, "credit" for that has to go to Daniel Wu -- whose part, to be fair, was probably as thankless as his character was pathetic and luckless. To be sure, he contributed very much to making the movie entertaining... but only entertaining in a "so bad it's hysterically funny" way.

That I don't rate Shinjuku Incident entirely lowly is due in large part to the winning presence in it of Naoto Takenaka (who I shall forever think of as Mr. Aoki of the original and miles better Shall We Dance? (Japan, 1996)). There additionally are several scenes and lines in the film that hark to it having had pretensions to be a work that truly was incisive in its damning portrayal of a group of people who fate has dealt a bad hand but sometimes unfortunately make matters worse on their very own.

On the face of the finished product, however, Derek Yee shouldn't only not work anymore with Jackie Chan but, also, stop trying to channel the spirit of the Shaw Brothers kungfu movies (some of which he did star in, after all). Instead, he should look less far back in time for inspiration: namely, directorial works of his such as the truly affecting C'est La Vie, Mon Cheri (1993) or the also very fine Lost in Time (2003).

There are some film fans for whom Japanese cinema = extreme shock cinema. The more I delve into the cinema of the Land of the Rising Sun, however, the more I am inclined to think that immaculate quiet dramas such as this latest offering from Hirokazu Kore-eda (whose body of work I was introduced to via Nobody Knows (2004)) are what Japanese filmmakers really do best.

A drama about a family whose remaining members have been scarred by the premature loss of a loved one (the eldest son and heir, to be precise), Still Walking most certainly has its sad sections, yet is full of life and the sense that -- as its title suggests -- people keep still walking and life goes on. For amidst the mourning and clinging on to poignant memories, new memories get created and emotional connections forged and strengthened.

What could also be described as a multiple character study's cast is uniformly fine -- with Hiroshi Abe (as the family's previously second -- now only -- son) turning out to be as good a dramatic actor as the comic actor I had previously primarily known him as and veteran actress Kiki Kirin (as the family matriach) being an especially watchable presence.

Strange but true: for all of death -- or, at least, the spirit of the dead son -- having such a lingering presence in the movie, watching Kiki Kirin's character cook and cook and cook (and various others eating and eating and eating the food she cooked and had delivered to the house) over not much more than a single day left me craving Japanese food long before the film ended! And so much so that pretty much the first thing I did upon exiting the theatre after the movie was to head to a Japanese restaurant for some sushi and tempura!!

Due to one of its leads having been involved in one of Chinese entertainment's most major sex scandal in years (if not ever), this Dante Lam film that was actually made before Beast Stalker (2008) has ended up seeing the light of day only now. And some sense of how low Edison Chen's star has sunk may be discerned in it being so that, unlike Richie Ren and Huang Xiaoming, there weren't any rabid fans of his in attendance at this cinematic offering's world premiere.

Judging from the reaction of those fans, they were a satisfied lot at movie's end. Based on the gender of the majority of those folks, it also seems as though this often very visually slick work is targeted squarely at females. For even while it is ostensibly an action movie (about snipers -- rather than, as per its English language title, a single member of that special police unit), it actually does seem as though the film's stars spend more time posing without their shirts on than involved in any job-related action.

I have to be honest and state that I think that Richie Ren and co look pretty good in the film -- and this fact might have positively clouded my opinion of the movie. For even while I'd grant that it's nothing special, I also don't actively dislike it either. Alternatively put: it's not Dante Lam's best but I still think it's quite respectable.

At the same time, if I could send a message to this film's makers, it'd be that: sometimes too much style can hurt a movie; especially an ostensible actioner that possesses such serious subject matter as quests for revenge and yearnings to be the best, not to mention work that involves the taking of other people's lives together with the regular risking of one's own.

Glad to hear you liked Still Walking. I'll be seeing it soon at the upcoming SFIFF. It's my one absolute must-see. I'm also considering Ivy Ho's Claustrophobia. Have you seen that?

Reading your review of Shinjuku Incident, I am recalling Daniel Wu in New Police Story. Again, it was a case for me of a "so bad it's good" performance. My expectations for this film are now even lower.

Richie Ren??? Wow he is one of the few actors who does nothing for me in any level. Glad you were entertained on some level at least.
(Brian's site had a hillarious joke about how the actors in this film was like their cardboard pics)

Shinjuku, I was not eager and certainly will not go out of my way to watch it. Thanks for suffering for us :)

Oddly, I think Daniel Wu's best (he has very few good performances) was in a film called Night Corridor, which is truly an awful film.

I have yet to watch any of these 3 movies... but I like your shot of the "Stairway to movie heaven" :)

Glad you had time to review some of the movies you've seen. Thank you. I'm disappointed but not surprised that Shinjuku Incident wasn't better.

Like Horsoon I enjoyed your "Stairway to movie heaven" shot and its title.

Think you'll be in for a treat with "Still Walking": one word of advice -- eat some Japanese food BEFORE you go into the screening of the film or be prepared to come out hungry for it!

And yes, I've seen "Claustrophobia": one of those films that's more interesting than entertaining but worth seeing all the same, IMHO.

Brace yourself: Daniel Wu is FAR WORSE in "Shinjuku Incident" than in "New Police Story". So much so that I couldn't help laughing out very loudly in at least one scene in which he figures prominently. Fortunately, the person next to me (Tim Youngs) was amused by it all too!

Re Richie Ren: You know my eyebrow weakness? Well, note that -- as with a certain fellow Taiwanese thespian -- he's got nice thick eyebrows... ;)

Re Daniel Wu: Ugh re "Night Corridor". Weird but true -- I think his best performance may well be in his first film: "Bishonen".

Teeheehee... you're excused not seeing any of those three films as two of them did have their world premieres only recently here in Hong Kong. And thanks for liking my shot. :)

Thanks for reading AND appreciating my accompanying photo (and the title I gave it). :)

Shinjuku opened here in Bangkok but only one theater seems to be showing it in Chinese and hopefully with English subs - so I expect to feel the pain sometime later this week!

Night Corridor wasn't that bad was it? I remember seeing it but have no memory of what it was about. I'd say that One Nite in Mongkok was Wu's best work.

Are Hong Kong movies usually dubbed into Thai in Thailand? Does the same go for other countries' movies?

"Night Corridor wasn't that bad was it?"

It was! But Wu gave a very nuanced and understated performance (much different from his usual wooden acting)
Bishonen, I like a lot but I think it is Stephen Fung's only good performance. Daniel looked good, but didn't impress as much.

Hmmm, funnily enough, with "Bishonen", thought that Daniel Wu and Terence Yin were better than Stephen Fung! But, then, as we know, our views often differ about people, movies, etc.! ;b