Another four movies viewed at the 2009 HKIFF 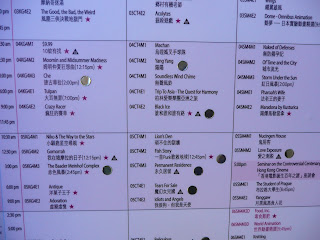 Part of a board showing a sampling of what was
on offer at the Hong Kong International Film Festival
(with gold stickers signifying sold out screenings)
The 33rd Hong Kong International Film Festival officially came to a close yesterday. Must admit that part of me is experiencing film festival withdrawal symptoms as a result. Fortunately, it's not like there aren't any more movies to watch -- and in fact, I'm due to attend a preview of a new Hong Kong movie. Also, there are films like Departures currently playing in cinemas. Still, I do intend to complete my reviewing survey of films viewed at this year's HKIFF. I just hope that there are way more people reading these entries than are deigning to comment on them... :S

I'm not sure if I've blogged about this but I'm another fan of The Wire. I'm mentioning this because watching this film about the workings of Italy's most famous mafia (Naples' Camorra), I at times got to thinking that I was watching the Italian feature film equivalent of Season 5 of the American TV series.

By this, I mean that they both contain lots of interesting interconnecting stories and characters strewn about and across a crime-infested landscape where it seems far easier to get sucked -- suckered? -- into a life of crime than one where such can be avoided. Also, that even while fictional, there seems to be a whole lot of truth in the portraits painted of people but also a whole urban sub-cultures and -communities.

At the end of the day though, I have to say that I think that The Wire is the more complex and compelling work by quite a wide margin -- probably in large part because it has many more hours to tell stories and flesh out characters. I also find it hard to sympathise with the lot of three of the youngsters who prominently figure in the Italian movie as it seemed like they "asked for it" -- in that they looked to have actively opted to commit criminal acts more for the thrill of it than for a genuine monetary or other need.

This low budget movie that follows a motormouth midget of a man and his gentle -- but slow (in wit as well as gait) -- giant of a fellow satellite TV dish technician as they move about Tehran certainly won't be many people's cup of tea. And, in fact, I had gone into a screening of this film knowing that Brian considered it one of the two weakest works of the 10 he had seen at this year's HKIFF.

While it's true enough that I often wish that more happened -- and quicker -- in this no frills work, I actually did find quite a bit of interest within it. One reason for this is Iran, where this film comes from, is one of those countries that seems so exotic in terms of being so different in many ways, including visually, from much of the world that I've been to, lived in and know. On a related note: like pretty much every other work I've seen by filmmakers from that country, the film feels very "real" as well as downright anthropological in being truly focused on depicting regular people and the kind of lives that says much about the society and culture even while -- or perhaps precisely because -- coming across as very mundane and ordinary for its time and place.

Lonely Tunes of Tehran also compels in that even while it has scenes and lines designed to make one laugh, it makes no bones about telling a sad story about two losers from the countryside who find it hard-going professionally as well as socially in a big city that doesn't look like it's experienced much of an economic boom for some time. An additional sense of tragedy comes from learning that one of its lead actors (Behrooz Jalili -- whose giant character shares his first name) died in a car accident after making this film. One just hopes that before his untimely passing, the real life Behrooz found more love and general social acceptance than the character he played.

Rough Cut (South Korea, 2008)
- From the Midnight Heat programme
- Jang Hun, director
- Starring So Ji-suh and Kang Ji-hwan
Of all the films I viewed at the HKIFF, this offering from first-time director Jang Hun was the one that most came across as having been intended to be a commercial crowd-pleaser. Quite surprising, really, in view of the helmer being a protege of Kim Ki-duk, and Kim having producing credits for this cinematic work about an arrogant, aggression-prone action movie star and the movie-obsessed gangster who agrees to be his co-star on condition that the fights in the film they're in are real rather than staged!

Less surprising (but a bit of a let down all the same) was this movie having a similar trajectory to too many other films from South Korea: that is, it entertained with all guns blazing for the first hour or so but then takes a turn for the tragico-dramatic that, instead, of being effectively emotionally moving, threatens to ruin the whole entire shebang for me. In particular, there is a scene about two-thirds into this movie that drains it of large amounts of credibility.

Just as I was about to give up on the work though, there's this amazing knock-out, drag-down fight that gets the two leads covered in muck (and got me admiring them so very much for their willingness to get so down and dirty for a cinematic cause). Additionally, in So Ji-sub (though not the more handsome but also more lightweight Kang Ji-hwan), the movie's got a very capable star actor who leaves one wanting to see him in more hours of film -- and actually feeling something when watching him in the final scenes that intended to generate pathos for a character who it does seem such a waste to have gone down the criminal path.

John Malkovich as a South African professor whose strong sexual appetite causes him to get sacked from his university position? Although it initially is a bit distracting to have such a well known American actor in the part and cinematic adaptation of JM Cootzee's Booker Prize-winning novel, ultimately he and the movie are so good that it actually all works.

Things really get going in this dramatic work that paints a far more depressing portrait of post-apartheid South Africa than one would like to see (yet also realizes is probably pretty sadly accurate) when the disgraced professor goes and visit his lesbian daughter on her isolated farm. More specifically, a terrible event occurs that not only causes them to threaten to emotionally fall apart but also points to the country as a whole threatening to fall, if not tear, apart.

Some truly bleeding-heart liberals might condemn this thought-provoking film as racist upon viewing it. I think that those who do so seriously would miss the work's many points. This is not least since, when watching the film, I saw so much within it that applies to so many other countries and people -- including Mainland China and my own home country of Malaysia as well as other parts of Africa rather than just South Africa alone.

Some radical feminists who view this cinematic offering might see it as making a strong case for men being beasts driven by testorone way more than thought. Again, I think this would be missing the point. For, ultimately, this emotionally-impacting film paints a portrait of a whole society and community, and shows how, even when one wants to be, no (hu)man is an island. Thus, often times, our actions cause reactions and things don't occur from out of the blue but, rather, are the result of historical along with other actions.

Lonely Tunes sounds interesting; much like your gap of Lubitsch, I have not seen any of the new Iranian films so heralded the past decade or so. That's extra shameful given the fact that my family has quite a few Iranian friends -- had my mother remarried one year earlier, my stepfather could have been Iranian but that's another story entirely, LOL.

Have you read my blurb re "The Book of Law" -- the other Iranian film I saw at the HKIFF? Recommended -- more than "Lonely Tunes of Iran", actually.

Another question: is the reason you've not checked out an Iranian film because the impression you've got is that they're intimidatingly heavy? If so, will say that they do run the gamut -- with some that are definitely art house but others that come across as interesting "slices of life" more than anything else.

And yeah -- definitely re my getting more comments re Chinese (specifically, Hong Kong) movies. So much so that I've been moved to wonder whether anyone cares to read what I think about non-Hong Kong films! :S

Disgrace is good, rough cut sounds interesting. Guess i'll watch it. i also liked this movie i saw a while ago, I Can’t Think Straight. i really liked it!. In case anyones interested, its a humorous lesbian movie.

I have seen him in Korean TV Show "I'm Sorry I Love You" (aka MISA) and he was excellent.

Glad you like "Disgrace" too. Also, thanks for the "I Can't Think Straight" recommendation. Another humorous lesbian movie that I'd like to recommend in turn: "Saving Face". :)